Common among the 2014 Medical Exam Toppers is their brilliance, persistence towards studies, dedication to their preparation and clear objective towards their careers and life. They all had different approach but sincerity, hard work and clarity of basic concepts were the main ingredients for all of them towards cracking different medical entrance exams. 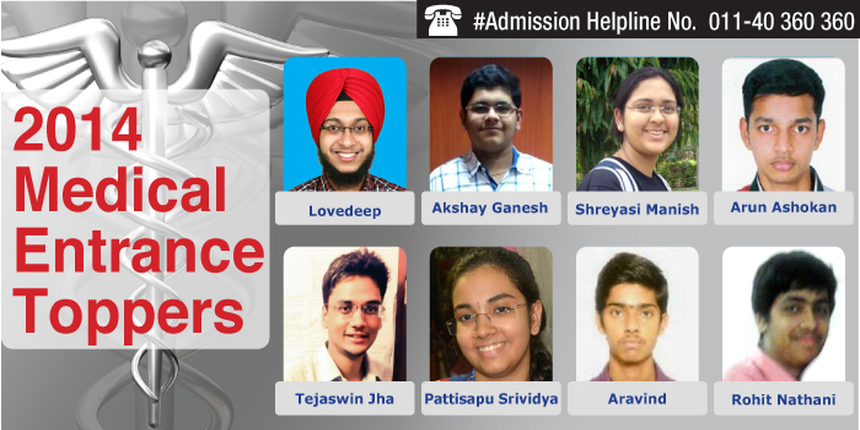 Careers360 interviewed many toppers of Medical entrance exam to know their mantra behind their grand success. We bring you success mantras of 10 toppers here. The toppers also share their interest, hobbies and preparation strategy.

Want to know which medical and dental colleges you can get based on rank in AIPMT 2014? Click here

While talking to toppers Careers360 found that their giant leap in career at such an initial stage of life was very humble. All of them were soft spoken. When we informed Pattisapu Srividya that she topped AIIMS MBBS 2014 exam she didn’t believe it. She repeatedly asked us, is it true? And finally she screamed with joy after seeing her name as AIIMS MBBS 2014 All India Rank 1. In another case, when we first approached AIPMT 2014 Topper - Tejaswin Jha, he candidly replied, “At this moment I wanted to rush home and meet my family. Can we please talk later”.

Background: A daughter of banker parent (father with State Bank of India and mother with Canara Bank) securing rank 1st in AIIMS 2014 entrance exam. She wishes to pursue molecular biology.

Success Mantra: Pattisapu Srividya attributes her success to love towards her studies and advices the same for aspirants. Interestingly she said, “I never compromise on my eight hours of sleep.”

Motivation: Fulfilling his Mamaji’s dream of becoming a Doctor. Tejaswin would be the first Doctor in his family.

Success Mantra: He believes in the Mantra of ‘getting the concepts clear andstarting from the basics’. He used to study for 6-7 additional hours apart from his routine study schedule at his coaching classes.

Like: Tejaswin likes Football and celebrated his success with his family and enjoyed FIFA world cup match.

Motivation: Got aspired from his elder brother who was AIR 5 in AIPMT 2011 and decided to become doctor.

Background: Aravind Subramanian is a known name of Thissur Disctrict Kerala. He first came to limelight after scoring cent percent marks in Mathematics at class 12.  Aravind Subramanian success story didn’t paused here only; he scored 939.8936 in KEAM Medical 2014 entrance exam, 17th AIR in JIPMER and 32nd in AIPMT 2014. Spoiled with options, he wishes to pursue MBBS from JIPMER and become neurologist.

Success Mantra:  Hard work and clarity on basic concepts of Physics, Chemistry, and Biology subjects. “I used to take 4 to 5 mock tests a week, which helped me to improve my question solving speed,” he says. A day before the exam, Aravind spent time on listening to music and playing video games.

Success Mantra: Preparation must be subject and topic specific. “I used to revise at least 1-2 chapters in a week and make important notes of it. To improve my speed of solving physics questions, I set a deadline to attempt 10 questions everyday and to solve them within a deadline of 45 minutes,” she says.

Hobbies: Shelikes to play badminton and love to explore new places. In fact, she recently went on a trip to Ranthambore National Park with her parents.

Background: Rohit Nathani who has grown up among doctors, describes medicine as a family business. Besides his Father and brother, most of his cousins are either doctors or studying medicine. He gives credit of his success to his family, who helped him cope with challenges during preparations.

Success Mantra: He says, “My plan was to take one topic at a time and put in all my effort on it. The idea is to prepare in such a way that you do not have to do it again and again.”

Hobbies: Passion for mobile gaming- temple run being his all time favorite pastime

Background: Akshay, a fun loving boy from Thane says that he used to play Football and Tennis while he was in 11th but eventually sacrificed it for the cost of AIPMT 2014. He doesn’t like watching movies but has interest in wildlife programmes. His mother Dr. Priya Ganesh Kumar is MD DGO (Mumbai) DGO (CFS) Gynaecologist and runs a Nursing Home in Thane and father Mr. V. Ganeshkumar is Gold Medalist in MBA and currently works as Joint General Manager of Essar Energy.

Success Mantra:  I used to wake up early morning at 6:30 am and take an hour to plan meticulously for the entire day. I believe that planning is necessary to reach a perfect goal. I studied the entire day with short breaks in between and, generally tried to finish it all by evening 6:30 pm in the evening.

Like: Sporty boy who lovesto playFootball and Tennis. Akshay also loves to watch wildlife programmes on NGC and Discovery Channel.

Background: Lovedeep Singh Dhingra is a student with extraordinary intelligence; he has a passion for doing magic tricks with family and friends. His parents, both of whom are doctors, were very helpful during the last stages of preparation.

Success Mantra:  Lovedeep Singh Dhingra says, “I did not study for prolonged hours. I just focused on completing my target syllabus, which I decided for myself when started my preparations. I never decided how many hours I would devote, but I used to decide what all topics I will be covering in one sitting. I am not a bookworm at all.”

Hobbies: Showing magic tricks to my friends and family is a great source of recreation for me

Prakash Gupta, 17-year old son of Dr Parmanand Gupta, who is an associate professor of Orthopaedics at the GMCH, wish to continue his father’s legacy by entering this profession.

Background: Arun Ashokan scored a brilliant 950 out of 960 in KEAM Medical 2014. The topper got a perfect score in Physics. Interestingly, Arun found the KEAM medical entrance easy unlike other aspirants who rate it among the toughest medical entrance exams. He also scored 312 Rank in AIIMS MBSS 2014.

Success Mantra: According to Arun Ashokan, while preparation one must refer to NCERT textbooks and Biology. He said ‘I spent a lot of time in Biology. I basically, referred to NCERT textbooks. In fact, I finished the NCERT books on Biology at least 10 times.”

Stay tuned to medicine.careers360.com for more news and feature related to Medical Exam 2014