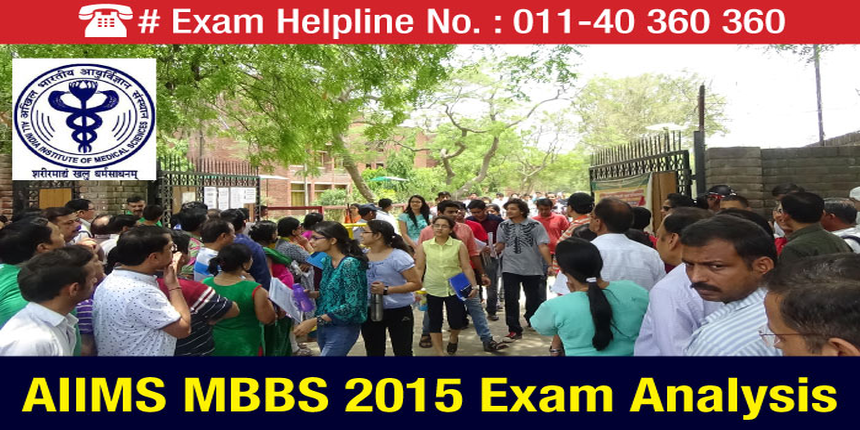 AIIMS MBBS 2015 Exam Analysis –
The All India Institute of Medical Sciences (New Delhi)- AIIMS conducted AIIMS MBBS 2015 entrance exam in on online mode on June 1, 2015 at around 154 centers across India. According to students who appeared for the medical entrance exam, the paper was tough in terms of difficulty level with Physics being the toughest among the four sections and Biology and General Knowledge being the moderate.

AIIMS, each year conducts the AIIMS MBSS 2015 exam to select candidates for final admissions to the undergraduate medical programme at AIIMS Delhi and 6 other new AIIMS. The exam was divided into four secions, with Physics, Chemistry and Biology having 60 questions and General Knowledge having 20 questions.

Archit Rajaswami Aiyer who appeared in AIIMS MBBS 2015 exam from Chennai found difficulty level of the exam to be tough.  “Most of the questions in Physics and Chemistry were reason-assertion based which were difficult to solve. In Physics, the toughest part was modern Physics and I hardly touched any numerical based questions. I found Biology and General Knowledge to be the easiest in the paper”, he said.

Aditi Priya, another candidate of AIIMS MBBS 2015 exam, appearing for the second time from Rakjot, Vadodara found difficulty level of the exam to be tough as compared to previous year. “I was nervous before the exam because of computer based format. But navigation among the question palette was smooth and I was relaxed after going through the online question paper. I found Biology and General Knowledge to be the easiest as compared to Physics and Chemistry. I found Physics to be the toughest among the four subjects”, she explains.

The candidates shared that Physics was hard-hitting for most of the candidates who appeared in AIIMS MBBS 2015 entrance exam. Amudha Kumari, who appeared from Nagpur said, “I have attempted good number of questions from all the subjects. Though Physics was tough but I attempted good number of questions from this section also. The easiest section for me was General Knowledge. I don’t found any technical problem while giving the entrance exam”.

Sharing his insight of AIIMS MBBS 2015 exam paper 1, Pathshala Director C. Shekhar said, “Overall AIIMS MBBS 2015 exam paper was of high difficulty level. Majority of questions were reason and assertion based so students took time to derive the answers. The questions from Biology and General Knowledge topic were easy as compared to Physics and Chemistry. Physics was the toughest among the three subjects. Personally, I feel that in-depth and basic knowledge in all three subjects was importantto qualify the AIIMS entrance exam”. He added that overall paper was easy in terms of difficulty level as compared to that of previous years.

Since AIIMS MBBS 2015 exam was a computer based test, AIIMS MBBS question papers and AIIMS MBBS 2015 Answer Key are not available in the public domain. Therefore, candidates have to wait for AIIMS MBBS 2015 result which will be published on June 18, 2015. The examination authority will declare the list of qualified candidates along with their name and roll number.

AIIMS MBBS 2015 entrance exam paper had 200 questions from 4 different sections. Each section, Physics, Chemistry and Biology carried 60 questions and another section of General Knowledge had 20 questions. One  mark will be allotted for each correct answer and there will be a negative marking of 1/3 for wrong answer.

AIIMS MBBS 2015 examination was conducted in two shifts and a normalization procedure to be used to determine percentile score corresponding to the above cut-offs. According to officials, the percentiles for the two shifts being dissimilar/unequal, the lower of the two will be the eligibility cut-off for that category for all candidates (i.e. both shifts).

The counselling for AIIMS MBBS 2015 will be held at New Delhi, only for those candidates who will securethe qualifying ranks. Counselling will be done for all the 7 AIIMS and seat will be allotted strictly on the basis of merit of the qualified candidates based on their choice and availability of seat, as per counseling norms.

Stay tuned to medicine.careers360.com for more news and feature related to AIIMS MBBS 2015