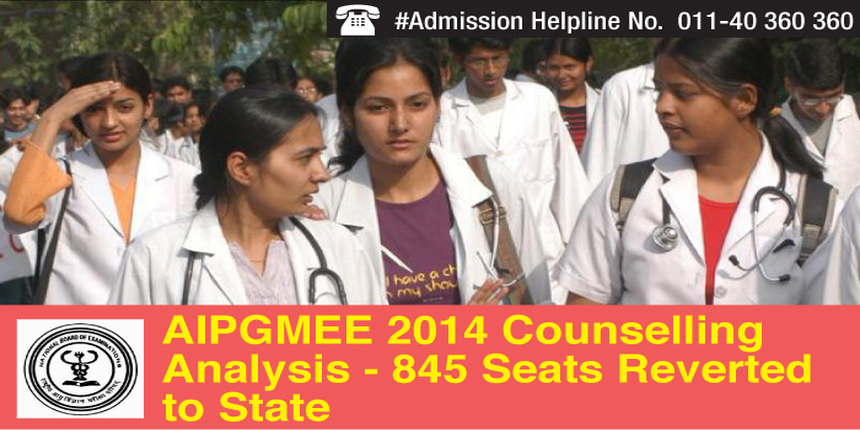 The final list of unfilled PG Medical seats was released by MCC in the first week of July, 2014.

Click Here to Enroll for PG Medical Target Pack to Get Test Series For AIPG & Other PG Medical Exams and Counseling Guidance For College Selection.

According to Medical Counselling Committee (MCC) officials, the counselling body has returned the unfilled MD/MS/Diploma Seats to respective state medical colleges. Surprisingly, Maharashtra state has been returned 140 seats, the highest among all the states. It is followed by Gujarat and Tamil Nadu with 99 and 73 seats returned respectively in MD/MS/Diploma courses.

Dr Bipin Batra, Executive Director of NBE, told Careers360 that out of 44,442 candidates who had qualified in AIPGMEE, 30495 candidates qualified to participate in online counseling for the All India 50% quota seats.

Most Preferred PG Medical Branch of 2014:

As per MCC, MD (Radio-Diagnosis) emerged top choice among the candidates followed by MD- General Medicine and MD- Paediatrics, Diploma in Radiation Medicine, M.D. in Nuclear Medicine, and so on.

Though most of the PG seats have been filled through AIPGMEE 2014 counselling, many seats are still vacant. The maximum numbers of seats are vacant in M.D. Physiology followed by M.D. Preventive & Social Medicine, M.D. Microbiology etc. Candidates can refer to the graph given below for comprehensive information on vacant seats in different PG courses at various medical colleges of India.

Refer to the graph below for all the unfilled PG seats in top medical colleges of India.

A total of 845 out of 6000 (approx) seats remain unfilled after 3rd extended round AIPGMEE 2014 counseling for 50% quota of MD/MS/PG Diploma courses offered at Government Medical Colleges /Institutions except states of Andhra Pradesh and J&K. This year B.J. Medical College, Ahmedabad has 29 unoccupied PG seats the highest among medical colleges.

For more information on unfiled seats in medical colleges refer the graph given below.

The graph is of 15 medical colleges corresponding to the number of empty seats.

Some of the known Medical Colleges Having Vacant Seats:

After the AIPGMEE 2014 counselling, Maharashtra has the maximum number of retuned seats. According to officials, a total of 140 seats have been returned to Maharashtra followed by Gujarat, Tamil Nadu and Karnataka.

For more information on returned PG Seats check the table given below.

Number of Returned Seats of 15 States

Stay tuned to medical.careers360.com for more news and updates on medical entrance exams

Hello,
The cutoff rank in 2019 was 349 and 2018 was 261 under 50% all India quota. As you have not mentioned if you are from Karnataka or not I have only mentioned the all India cutoff for general category
Also, these cutoffs change every year and it is not necessary they will be same. However, GDC Bangalore is a very good college and you must get a very high rank to get an MDS Seat.
For more information about MDS counselling check the link below
https://medicine-careers360-com.cdn.ampproject.org/v/s/medicine.careers360.com/articles/neet-mds-cut-off/amp?amp_js_v=a3&amp_gsa=1&usqp=mq331AQFKAGwASA%3D#aoh=15823096604413&referrer=https%3A%2F%2Fwww.google.com&amp_tf=From%20%251%24s&ampshare=https%3A%2F%2Fmedicine.careers360.com%2Farticles%2Fneet-mds-cut-off
Hope this helps
All the best
Read More
Answer
Answer Later
Report
80 Views

MY NEET PG 2020 rank is 9590. I am general cat student. Is there any possibility of getting a Derma seat at this rank?

I would like to tell you that you might get a seat and there are chances but obviously more chances would be if you participate in state quota counseling and choose dermatology there as your field of study in any one of your state government medical college.