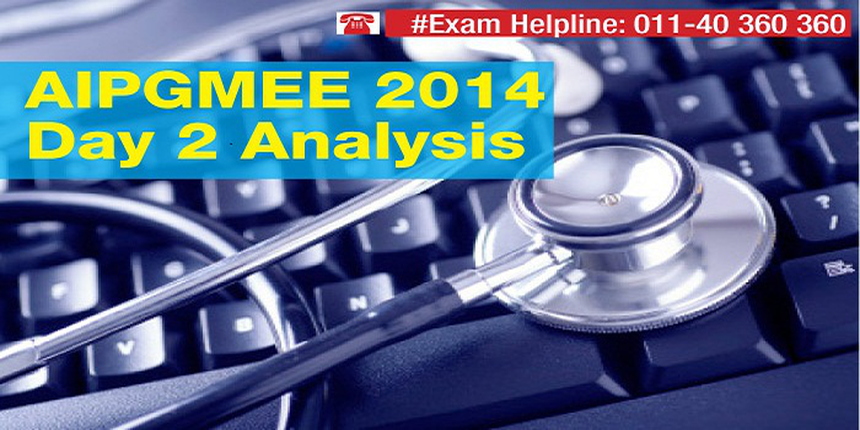 AIPGMEE 2014 Exam Analysis: National Board of Examinations, Delhi is conducting the AIPGMEE 2014 exams between November 25, 2013 and December 6, 2013. Around 80, 000 candidates across India took the exam for admissions to MD/MS/PG Diploma Course. The difficulty level of the exam was somewhat moderate to tough. The only surprise in the AIPGMEE 2014 exam is being conducted by the National Board of Examinations (NBE) is that no such overwhelming surprises were incurred as it was predicted.

As per the students, who took the exam on the first two days of AIPGMEE 2014; the questions asked this year were somewhat okay. Only a handful of questions were repeated say, 5%. While the most of them were good ones, if someone would have given at least 12 hours of study and concentrated mainly on the important sections could be able to secure a place in the merit list.

Check here for the other upcoming PG Medical Exams

The difficulty level of the exam was in general moderate to tough. While some sections were moderate, the other being okay and some of them were tough. While we interviewed the candidates, the general say was that the questions were set at par the level. Most of them being the one liner questions, if you know the correct answer you are on the safe side, if you don’t you can’t guess it!

The questions were of the new pattern. While the National Board of Examinations (NBE) laid 300 questions in the AIPGMEE 2014. Each of the questions carried 4 marks. The candidates taking AIPGMEE 2014 exam were relieved of the fact that there was no system of negative marking. Some of the candidates grinned that this fact of no negative marking helped them to touch the unknown questions too which some or little could help. But as earlier said, if you know the topic, you are 4 marks ahead otherwise it’s futile.

The candidates recalled that there were no such problems in taking the AIPGMEE 2014 Exam being a prometric online Exam. Almost every of them agreed that the guides who were present there were very helpful and co-operated well with the AIPGMEE aspirants.

Some other points regarding the AIPGMEE 2014 exam analysis were that some of the questions overlapped in some manner or the other as the topics too overlapped as per the syllabi. Broadly speaking the para-clinical section comprising Microbiology, Pathology and Forensic Medicine covered the major questions. Comparatively the para-clinical section was tough than the other two; pre-clinical and clinical, respectively.

In the nut shell, a person covering the three sections with a command over the important topics like Microbiology, Pathology, Forensic Medicine, Pharmacology, Community Medicine, Surgery, Radio-therapy etc, shall be able to make up with 70% of the total questions.

All the Best! To all and one who shall be taking AIPGMEE 2014 exam in the next few days. Visit our page for the latest Exam updates on AIPGMEE 2014 Exam Analysis.

We at Careers360 shall provide you the in depth section wise AIPGMEE 2014 analysis soon enough. Stay tuned with us.

With 790 marks in the NEET PG exam, your expected general rank would be around 1377 - 1677. It would be difficult to predict the category rank as it would depend on number of candidates appearing for exam under that particular category.

any chance of getting neet pg result today?. many people telling today

No , NEET PG results are not going to be declared today . NEET PG 2020 result will be announced by NBE by January 31 in online mode.
You will be able to download the result of NEET PG 2020 from the official website natboard.edu.in or nbe.edu.in.

For detailed information go through our page for which link is provided below
https://medicine.careers360.com/articles/neet-pg-result

Is result declare of neet pg 2020before tentative date

You can go through the link below to check the details and stay connected for recent updates:

Can paraplegic (with having 0 movement in lower limbs using wheelchair to mobilise) apply for pwd quota in neet pg?

Person must have minimum 35% mental handicap or disability. Person must have an orthopedic disability of minimum 40% In case of deaf people the disability percentage must be between 90 db & 100 db. Visual impairment has to be more than 90%. if you are satisfying the percentage criteria mentioned above and you have a valid certificate to apply for pwd. then ofcourse you can apply for the pg in that quota.

all the best for your bright future..

is 600 marks in Neet PG 2020 will get Seat in Government college in Tamil Nadu?

let me clear your doubt.

Yes there js a high chance to get seat in government college in Tamil nadu fot neet pg 2020 with this marksi. E 600 as  your marks is quite good .

I hope my answer will help you out.