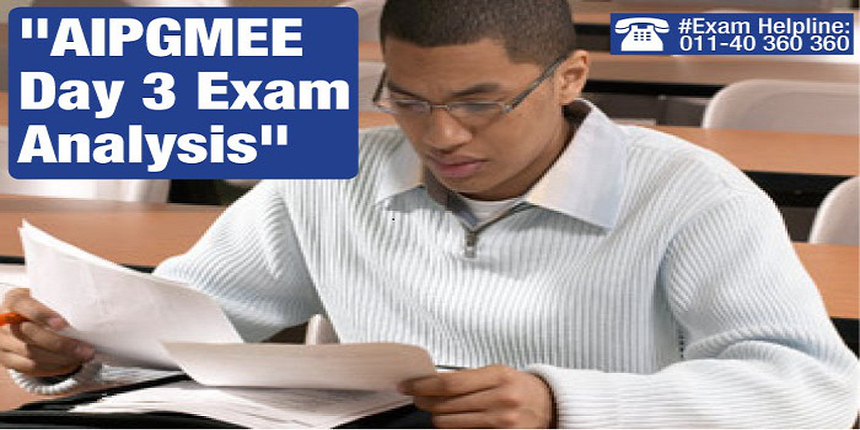 The difficulty level of the exam was somewhat easy to tough. However the surprising part in the AIPGMEE 2014 day 3 exams was that no such astonishing surprises did occur as the aspirants feared.

The day 3 of AIPGMEE 2014 saw the candidates taking exam with an ease. What the paper wanted was effective time management. As discussed by us in our previous article, the AIPGMEE 2014 day 3 exam had 300 questions. These 300 questions were distributed unevenly in Pre Clinical, Clinical and Para Clinical.

As per the candidates, most of the questions were set on the first and second year syllabi pattern. A good number of questions were asked from Microbiology, Physiology, PSM, Medicine portions. Nearly 150 questions were somewhat which could easily be solved by the aspirants. While the next 60-70 questions were moderate and the remaining could be marked tough.

Though the questions which were there in the day 3 exam were one liner, but still it required time management.

An aspirant reviewed that some new questions were also asked. Moreover, she agreed that there was a pattern change this year from that in 2012. There were some direct questions pertaining to the data/percentage. This exam day too had the common viewpoint regarding the questions that that they were such that if you know the questions, you are on the go; and if you don’t you can’t guess. Though there is no negative marking system in the AIPGMEE 2014 but still it is risky to rely on the guess, quoted by one of the AIPGMEE 2014 aspirants. In addition to the above, she agreed to this also that time management is an important element while taking AIPGMEE 2014 exam.

Moreover the common voice arose that while taking AIPGMEE 2014, one should get clear with basics. The aspirant should be well aware of the basic questions, common base knowledge regarding the portions and a clear concept regarding the papers taught in the initial years of medical syllabi.

Coming to the portion-wise difficulty, the day 2 exam of AIPGMEE 2014 witnessed the tougher questions in Para-Clinical followed by Clinical and afterwards Pre-Clinical. Anyways if the aspirants should have had the basics strong then the day 2 AIPGMEE 2014 exam paper would have been a scoring day for them.

All the Best! To one and all who shall be taking AIPGMEE 2014 exam in the next coming dates. Visit our page for the latest exam updates on AIPGMEE 2014 Exam Analysis.

We at Careers360 shall be providing you the in depth section wise AIPGMEE 2014 detailed analysis soon enough. Stay tuned with us.

With 790 marks in the NEET PG exam, your expected general rank would be around 1377 - 1677. It would be difficult to predict the category rank as it would depend on number of candidates appearing for exam under that particular category.

any chance of getting neet pg result today?. many people telling today

No , NEET PG results are not going to be declared today . NEET PG 2020 result will be announced by NBE by January 31 in online mode.
You will be able to download the result of NEET PG 2020 from the official website natboard.edu.in or nbe.edu.in.

For detailed information go through our page for which link is provided below
https://medicine.careers360.com/articles/neet-pg-result

Is result declare of neet pg 2020before tentative date

You can go through the link below to check the details and stay connected for recent updates:

Can paraplegic (with having 0 movement in lower limbs using wheelchair to mobilise) apply for pwd quota in neet pg?

Person must have minimum 35% mental handicap or disability. Person must have an orthopedic disability of minimum 40% In case of deaf people the disability percentage must be between 90 db & 100 db. Visual impairment has to be more than 90%. if you are satisfying the percentage criteria mentioned above and you have a valid certificate to apply for pwd. then ofcourse you can apply for the pg in that quota.

all the best for your bright future..

is 600 marks in Neet PG 2020 will get Seat in Government college in Tamil Nadu?

let me clear your doubt.

Yes there js a high chance to get seat in government college in Tamil nadu fot neet pg 2020 with this marksi. E 600 as  your marks is quite good .

I hope my answer will help you out.