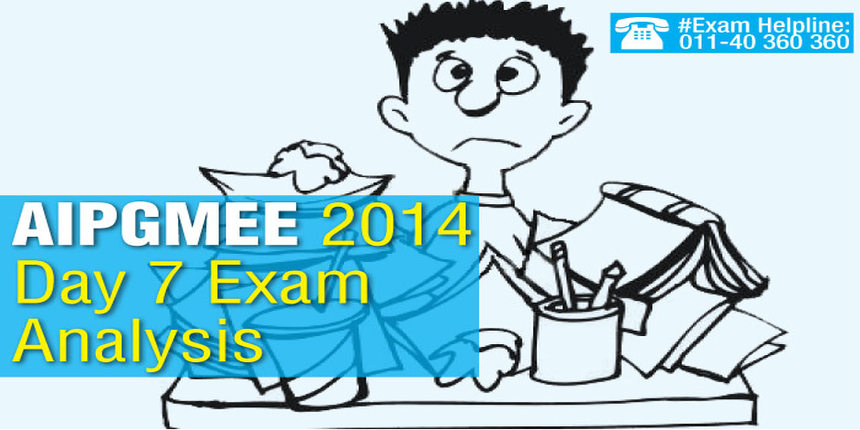 The difficulty level of the exam was homogeneity of easy and tough questions. This time too, the paper didn’t throw any surprises.

About 20 questions were related to cases, 10-12 were asked on Pathology, 7-10 on pictorial diagnosis, etc. While 2-3 questions came from the information provided in Medical Journals; some of the other questions were those related to the advanced technology and modern medicine.

Homogeneity of Difficult and Easy Questions

The difficulty level of the exam as accounted by most of the students was both; easy and difficult questions. However one of the AIPGMEE 2014 aspirants said, “The questions that were in new pattern and were never repeated in any manner were regarded as the difficult ones. Earlier as the exam questions asked were somewhat easy but under NBE, the standard of exam was high as compared to the previous years’.”

The majority of the aspirants said that the National Board of Examinations (NBE) has increased the difficulty level of the exam than that conducted by DNB. They noted that if a student comes prepared with his/her basics clear, he/she could be able to score well.

What most important was during the AIPGMEE 2014 Day 7 Exam was time management! Though most of the questions were one-liners but still the three hours time was short as the AIPGMEE 2014 aspirants could not revise the answers. However, the students taking AIPGMEE 2014, a computer based test (CBT) could recheck their answers by going back to the previous questions. But with 300 questions and 3 hours in hand, it was almost a difficult task to revise; one could only answer the questions as many as he/she can. There was no negative marking which helped the aspirants to respond to some of the unknown questions too. Conversely, the AIPGMEE aspirants agreed to the point that if you don’t know the questions, you can’t do any guess work, so when you are responding to the unknown questions, you are just trying your luck!

We at Careers360 shall be providing you the in depth section wise AIPGMEE 2014 detailed analysis soon enough. Stay tuned with us.

Congratulations on your performance!

After considering your NEET PG score, our Careers360 estimates your NEET PG general rank to be from 2 806 to 3106.

You can use our Careers360 NEET PG College Predictor to get a list of the possible colleges you seek admission into.

Here's the link to the predictor:

Hope this helps. Careers360 wishes you the best for your future endeavours!

According to your NEET MDS overall rank, chances are less to get a seat in government colleges through All India Quota. Chances are also less in central universities. You can get admission through management quota in deemed universities. Check your chances through the NEET MDS College Predictor tool

Exact dates for the results of NEET PG examination has not been declared yet but yes NEET PG results will be released by January 31,2020 by NBE.

For more information go through our page for which link is provided below
https://medicine.careers360.com/articles/neet-pg-result/amp

pls tell me tha difference between NEET and NEET PG