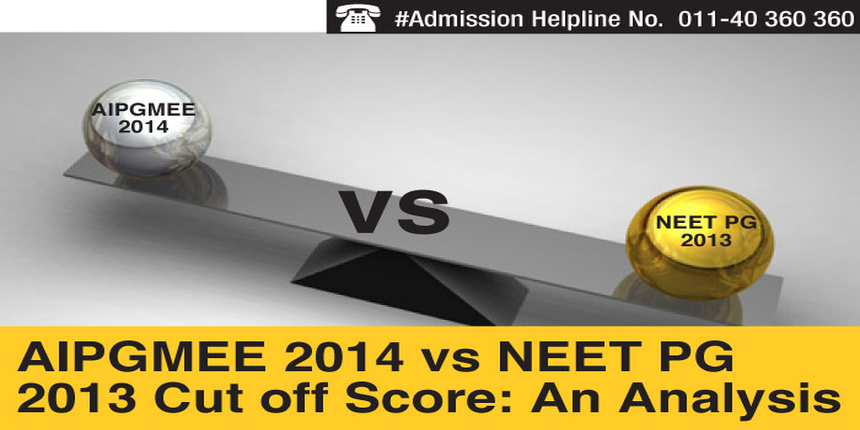 The AIPGMEE general category cut off rank for 2014 stands at 23,094 which mark a huge jump from the cut off score for NEET 2013, which stood at 16,452. However, in terms of test takers AIPGMEE 2014 witnessed a decrease by almost 20,000 as 70073 appeared for the test compared to 90,377 the previous year for admission to All India 50% quota seats in Government Medical colleges in India.

Similarly, a comparison of the number of candidates who  participated in the AIPGMEE 2014 online counseling reflect that with 30,495 out of 70,073 more test takers took part for counselling in the present year compared to NEET 2013 where only 27, 280 joined the counselling process out of 90, 377 candidates.

Talk to our expert counsellors for any doubts and queries related to the exam pattern, and preparation on AIPGMEE 2015 Exam Helpline at 011-40360360

A comparative analysis of AIPGMEE 2014 and NEET PG 2013 is as follows:

Based on the official information, the last rank of candidate qualified under general category in AIPGMEE 2014 was 23, 094 while in NEET PG 2013 it was 16, 452. The below graph shows AIPGMEE 2014 and NEET PG 2013 rank wise cut off score for various category candidates.

According to Medical Counseling Committee (MCC), which allotted seats under the first round of counseling, MD (Radio-Diagnosis) emerged top choice with 45 candidates among top 100 allotments making it their choice of PG subject.  MD- General Medicine and MD- Paediatrics came as second and third favourite with 27 and 10 candidates respectively getting the two subjects.  The top 3 seat allotment was made for MD (Radio-Diagnosis) in Maulana Azad Medical College, New Delhi.

Over 700 seats allotted in Round I of AIPGMEE 2014 Counseling remained vacant, making way for new candidates to take admissions in different medical institutes during round-II of AIPGMEE 2014 counselling.

A total of 845 Post Graduate Medical Seats are vacant after the 3rd extended round of AIPGMEE 2014 Counseling.

As per MCC, MD (Radio-Diagnosis) emerged top choice among the candidates followed by MD- General Medicine and MD- Paediatrics, Diploma in Radiation Medicine, M.D. in Nuclear Medicine, and so on.

Though most of the PG seats have been filled through AIPGMEE 2014 counselling, many seats are still vacant. The maximum numbers of seats are vacant in M.D. Physiology followed by M.D. Preventive & Social Medicine, M.D. Microbiology etc.

A total of 845 out of 6000 (approx) seats remain unfilled after 3rd extended round AIPGMEE 2014 counseling for 50% quota of MD/MS/PG Diploma courses offered at Government Medical Colleges /Institutions except states of Andhra Pradesh and J&K.

Stay tuned to medicine.careers360.com for more news and feature related to AIPGMEE 2015

NEET PG counselling 2020 - MCC will conduct counselling of NEET PG 2020 in the second week of Mar...

What is the cutoff for this college in neet pg for obg?

Here is information you want to know,

For further more information, kindly go through the following link:

Hope this data helped. Thank you.

Institutional quota means there are some seat capacity in every college which is filled in the badis of entrance exam ranks like NEET.

But after all this admission there are some students who can take admission by the direct entries and those candidates have the reservation.  This type of seat called as Management quota seats.

But always Institutional seats are preferred for the students.

Hope it will help you.

hello sir, Is it compulsary that- Obc certificate should be a recent one for neet pg counselling??

OBC Caste certificate is valid for life long and the OBC--NCL is valid usually for 1 year. So if you are planning on availing OBC benefits, you need to have the recent OBC-NCL certificate. If the current one that you have will expire anytime soon before the counselling, you should get a new one done.

Going by previous All India cut offs and your rank, you may have decent chances in the following Medical Colleges:

Suresh, NEET PG Registration and Counselling dates are yet to be announced. It is speculated that the online registration might start tentatively during the 2nd or 3rd weeks of March. At this point in time the MCC NEET PG official website is under maintenance and so not much can be said. But do visit our page for tentative dates: https://medicine.careers360.com/articles/neet-pg-counselling