AIPGMEE 2016 results: Cut-off for General, OBC decline by over 90 marks 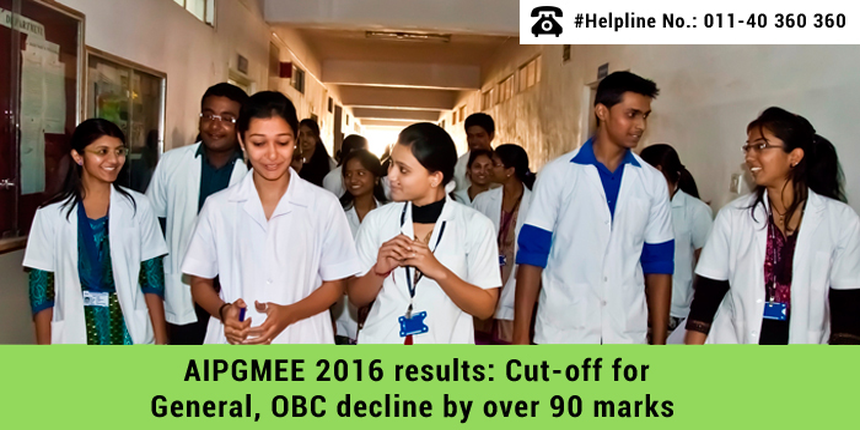 According to coaching experts and toppers, the cut off score has declined due to higher difficulty level of the exam. Majority of candidates who appeared in the exam had found it to be ‘Moderate to Difficult’ with the Pre-Clinical portion being the toughest and Clinical being the easiest among the various sections.

However, AIPGMEE 2016 cut off score for SC and ST categories show a marginal increase of 1 mark.

The graph given below shows AIPGMEE 2016 Vs 2015 cut off scores for different categories for participating in online counselling.

The AIPGMEE 2016 cut off score for qualifying the exam for General category candidates is score 50% and OBC and 40% for ST/SC category candidates. Further, a merit list is prepared and students are selected for online counselling based on the cutoff released by NBE after the result announcements. The merit list of each category consists of total of five times of number of seats available for allotment. The graph given below shows AIPGMEE 2016 cut score in terms of percentage.

For better understanding of AIPGMEE 2016 counselling process, Careers360 brings the rank wise cut off detail of AIPGMEE 2015 counselling. This will help candidates to know possibility of their admission to particular postgraduate medical courses based on AIPGMEE 2016 score.

Stay tuned to medicine.careers360.com for more news and feature related to AIPGMEE 2016

Punjab PG Medical Admission 2020 will begin in the last week of March, 2020. Go through Punjab PG...

Going by previous All India cut offs and your rank, you may decent chances in Medical Colleges like:

Chettinad Academy of Research and Education

My daughter scored 760 marks in PG Neet 2020. Will she be able to get MD (General Medicine) in govt college / Open category

My neet pg 2020 rank 72641 and score 391 can I get chance for admission in MD general medica,tropical medicine,or community medicine in Gov college or private college

First of all congratulations on securing average rank in NEET PG 2020. As per your rank and previous year cutoff, you will get private colleges with this rank. The colleges you will get in medicine are:

There is a list of medical you will get as per your rank. Hope this helps!! You can also go through our college predictor link: https://medicine.careers360.com/neet-pg-college-predictor

i scored 13318 in neet pg ,i am from Andhra Pradesh,am I eligible for uttarpradesh private colleges

Yes, according to the UP PG medical admission eligibility criteria a candidate who have passed their under graduation  outside UP and is not a resident of UP are also eligible to get admission in private colleges in UP.Candidates must qualify NEET PG with minimum cut off marks.