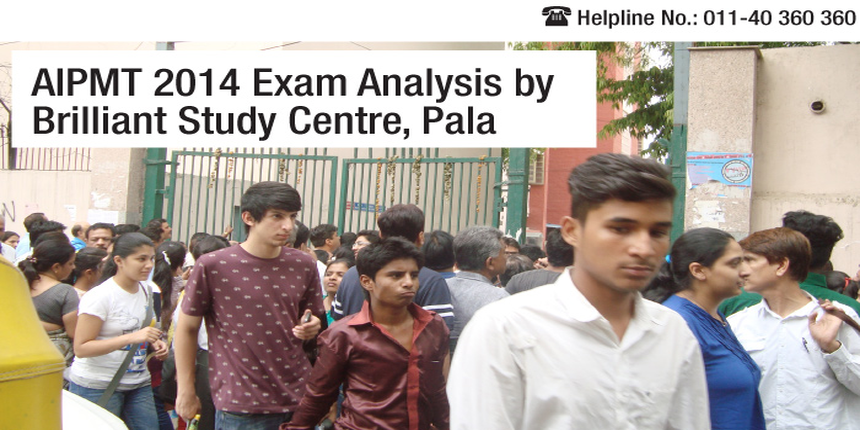 Written examination of All India Pre-Medical Test (AIPMT) 2014 was held on May 4, 2014 at different test centres across the country. Careers360 brings you an in-depth analysis of the entrance test by Santosh Kumar B, Director of Brilliant Study Centre.

The expert shares his valuable insight on overall as well as section wise difficulty level of the AIPMT 2014 exam.

Careers 360: AIPMT 2014 Exam is over now. What is your overall analysis of the paper?

Santosh Kumar B: The AIPMT 2014 was comparatively tougher than NEET 2013 but at par with AIPMT 2012. In general, AIPMT seems to be a tougher than state level exams and may be considered as a reasonably “good exam”.

Careers 360: Can you give a brief insight on the difficulty level of the exam?

Santosh Kumar B: AIPMT is conducted to select about 6,000 students from around 1,50,000 students. Hence, only a “reasonably tough exam’ can eliminate 1,44,000 aspirants. The difficulty level of the exam can only be considered reasonable even though individuals feel it to be difficult.

Careers 360: Which subject was the toughest? Which was comparatively easier?

Santosh Kumar B: The answering of Biology questions require in-depth understanding of its concept. The choices were confusing. Biology was the toughest section. A few questions were general in nature. However, questions featured in the Physics section consumed more time than “the share of time” needed to be invested for a question.  Hence, Physics section was also tough. Chemistry was the easiest section.

Careers 360:  What about the topic-wise distribution of questions in PCB?

Santosh Kumar B: In physics, 1, 2 or 3 questions were from almost all chapters. But there were 5 questions from heat alone. In Chemistry, the representation of inorganic and physical were more than organic. In Biology, almost all parts shown equal representation.

Santosh Kumar B: Since medical council stipulates a minimum score of 50% for general candidates and 40% OBC/SC/ST, all the students who scores more than the above may be placed in the rank list.

Result of AIPMT 2014 will be declared in end of 1st week of June, 2014. With the help of AIPMT 2014 Answer Key candidates can calculate their scores on the basis of their performance in the exam. They can also evaluate their probable marks in the AIPMT 2014 entrance exam