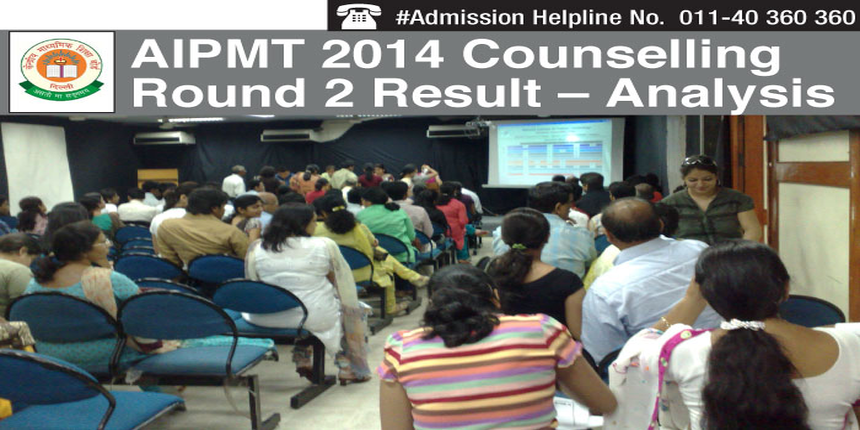 Surprisingly, 20 out of 50 AIPMT 2014 toppers did not report to their allotted medical colleges after the first round of AIPMT 2014 counselling. The result of AIPMT 2014 Counselling Round 1 was published by MCC on July 11, 2014.

As per official information, 18,115 candidates had participated in the AIPMT 2014 Counselling Round 1 for 2,156 MBBS and 249 BDS seats in 123 Government Medical and 29 Dental Colleges of India respectively, excluding Andhra Pradesh and Jammu & Kashmir.

The second round of AIPMT 2014 counselling also offers upgraded seats. A total of 976 seats were upgraded for candidates who have opted for upgradation during Round 1.

Candidates who have been allotted seats in Round 2 of Counseling will have to report to their allotted institutes by August 16, 2014. The table given below carries some important highlights of AIPMT 2014 Counselling Round 2.

More than 1800 seats are available for 3rd round of AIPMT counseling, check which college you can get based on your AIPMT rank Click here

Category Wise – AIPMT 2014 Cut off Rank in Round 2 Counselling

For admission to MBBS seats, the AIPMT 2014 cut off for unreserved category candidates in the second round of Counselling is 3805, while that for BDS seats is 6483.

Check the category-wise AIPMT 2014 cut off rank who got MBBS and BDS seats in AIPMT 2014 counselling round 2 are shown in the graph given below:

48 Seats in Popular Medical Colleges Upgraded in Counselling Round 2

Following candidates were eligible for Round 2 of AIPMT 2014 allotment

Candidates Not Eligible for AIPMT Round 2 of Allotment

Overall, as many as 46,271 candidates qualified the test for counselling process for different medical colleges which fill their capacity on the basis of AIPMT 2014 result. The Qualified candidates have to further complete the formalities with the respective Counselling Authorities, such as, DGHS, Medical Education Directorates of States, AFMC, Institutions and Universities, etc. for admission to MBBS/BDS Courses.

Stay tuned to medicine.careers360.com for more news and feature related to AIPMT 2014 Counselling