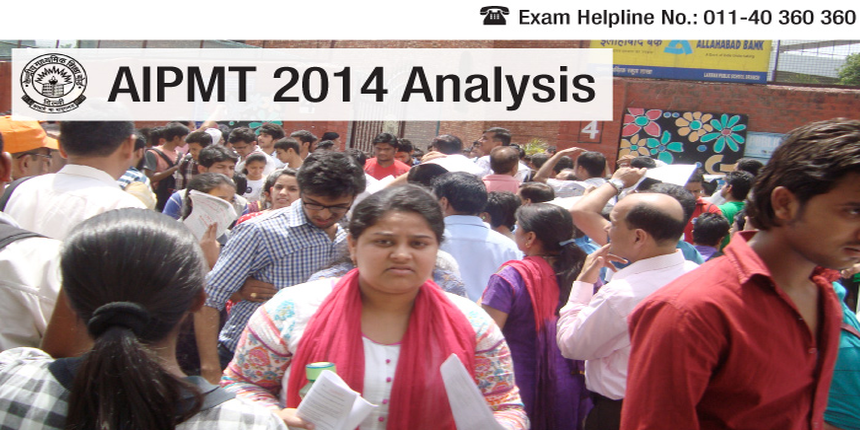 AIPMT 2014 entrance exam
was conducted on May 4, 2014 at different centres across the country. According to candidates and experts, the exam was moderate in terms of difficulty level with most candidates finding Physics to be toughest among the three sections.

According to Vineet Jaglan, a candidate from Panipat, “Physics was toughest of all the sections and most of the questions were asked from the Mechanics portion. Chemistry was easier than Physics where Organics questions were most prominent followed by Physical and Inorganic questions. Biology was the easiest.”

Niki Singh who appeared in AIPMT 2014 from Muzaffarpur, found the exam’s difficulty level to be moderate. “Initially I was nervous but after reading the question paper I was relaxed. I attempted all questions from Chemistry section and skipped a few questions from Physics section.,” she said. Nikki expects to score in the range of 550-600 marks in the exam.

However, Physics played the spoilsport for some candidates. Sweety Pudir, who appeared for the AIPMT 2014 entrance exam from New Delhi was upset with the question paper. She found the questions asked in Physics tough and Botany also to be a little difficult. This was Sweety’s second attempt at cracking the all medical entrance exam.

Experts speaking to Careers360 immediately after the exam too had the same view. According to C. Shekhar, Director, Pathshala, compared to previous year the AIPMT 2014 question paper was not much  difficult. He, however, agreed that Physics was the toughest section in the paper.

The AIPMT 2014 entrance exam paper carried 180 questions from three different sections. While physics and chemistry carried 45 questions each Biology section carried 90 questions equally divided between Botany and Zoology. Each question carried 4 marks for correct answer and there was negative marking of one marks for wrong answer.

According to CBSE, 6, 16, 982 candidates had registered for AIPMT 2014 for 15% all India quota seats in Government Medical colleges across India excluding Andhra Pradesh and Jammu & Kashmir.

AIPMT is a national level undergraduate medical entrance exam for admissions to Bachelor of Medicine and Bachelor of Surgery (MBBS)/Bachelor of Dental Surgery (BDS) programmes under 15 % All India quota seats in all Government Medical colleges across India excluding Andhra Pradesh and Jammu & Kashmir.

The answer key of AIPMT 2014  will be available soon. Candidates can download the AIPMT 2014 Answer Key here to match their response and calculate their score.

AIPMT 2014 result will be published by CBSE in the first week of June, 2014. Before publication of the result, CBSE will release the images of OMR Answer Sheets and responses graded by machine of all the candidates who appeared in the exam. The OMR answer sheets will be displayed from May 25 to May 31, 2014.

To be eligible to appear for NEET you need to complete your 10+2 with Biology/Biotechnology, Physics, chemistry and English from a recognised board or university.
And a candidate belonging to general category must have passed with atleast 50% in 10+2 for SC/ST it is 40% and for PwD category it is 45%.
There is no upper age limit but the minimum age must be 17.5 years.
Right now this is the Eligibility criteria for NEET. So you must study the following subjects in your 10+2 and prepare for NEET.
Read More
Answer
Answer Later
Report
13 Views