AIPMT 2014 - Expert suggestions on what should be your preparation strategy 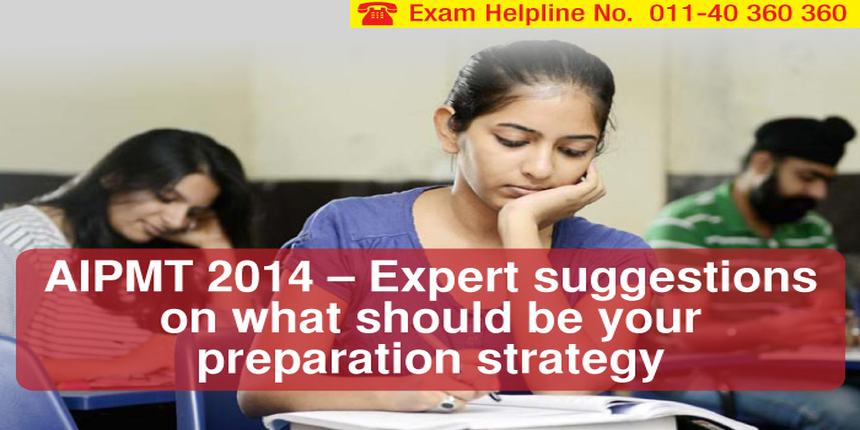 With just 4 months to go for AIPMT 2014 scheduled on May 4, 2014, Careers360 brings you expert insight on preparation strategy of the coveted medical entrance exam.

"Get your personalized preparation report and improvement plan. Analyze your preparation level with AIPMT Prepmeter"

Experts say Cracking AIPMT 2014 all depends on your preparation strategy, self practice, time management and at last but not the least, belief in hard work.

For any doubts and queries related to the exam pattern, preparation and other exam related queries, students can call the AIPMT 2014 Exam Helpline at 011-40360360

Careers360: With just four months left, what should be the preparation strategy for AIPMT 2014?

Amrit Pal Singh: A student should prepare in a focused manner for AIPMT, from a national level coaching institute of repute.

A student should revise the Test papers, Assignments and Practice papers as per the pattern & syllabus of AIPMT.

Adhering to the 11th and 12th courses should be prepared consistently in a strategic way with proper time management all through these four months as it would be prudent and beneficial.

Careers360: Which books would you suggest for preparation?

Amrit Pal Singh: A student should read the NCERT books. NCERT books are definitely good but obviously not sufficient so. He/she can refer any other books of famous authors for more practice.

Amrit Pal Singh: As expected, this year questions of AIPMT will be easier than NEET 2013.

Careers360: What are the Do's and the Don’ts for these AIPMT aspirants?

Careers360: What should be the key areas to play in this AIPMT exam?

Amrit Pal Singh: Thorough preparation of subjects and a student should be conceptually strong to clear his/her doubts for better scoring and qualifying the exam.

AIPMT 2014 Application Error: Arunachal Pradesh does not seem to exist for CBSE!

How to fill AIPMT 2014 Application

hello i got neet pg rank 57233 under general category.i wanna to go for general medicine ,Paediatrics , pulmo medicine . can u give me some suggestion abt how to go for choosing the branches in counselling

Going by previous All India cut offs and your rank you may have decent chances in the Santosh Medical College for Pulomnary Medicine. With your rank, it is tad difficult for General Medicine and Paediatrics.Having said that, this is 2019 data and cut offs change every year depending on various factors such as no.of Candidates appearing for the exam, no.of Candidates qualified, difficulty of the exam, and no.of seats available for each specialisation. Please try our College predictor to check the possibility of other specialisations with you rank across India:  https://medicine.careers360.com/neet-pg-all-india-college-predictor

Hi aspirant!
NEET indeed is a very tough exam to crack. You simply have to work harder than before. It may be tough, but is not impossible. Please go through the below link to get preparation tips for the NEET exam. Hope it helps.