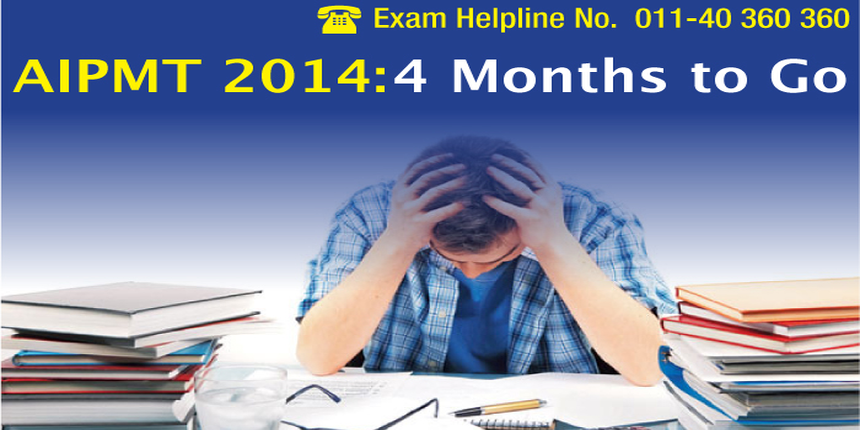 With just 4 months to go for AIPMT 2014 scheduled on May 4, 2014, Careers360 brings you expert insight on Preparation strategy for the coveted medical entrance exam.

Experts suggest that key to cracking the AIPMT 2014 is your confidence and belief in your hard work.

For any doubts and queries related to the exam pattern, preparation and other related queries, students can call the AIPMT 2014 Exam Helpline at 011-40360360.

Careers360: Last year it was NEET. This year it is AIPMT. What are the key differences between these two and possible benefits the MBBS aspirants could get from this?

Shiv Pratap Raghuwanshi: The key difference is that NEET was conducted in 2013 for almost total (as some exams were not brought under the ambit of NEET) number of seats for BDS and MBBS across India while AIPMT to be conducted in 2014 is for only 15% of almost the total number of seats (except those in the states of AP and J & K). In terms of difficulty level of the two exams, I see hardly any difference. I don't see any advantage of AIPMT over NEET. Rather NEET was preferred for the students.

Careers360: Now just few months are left for AIPMT entrance exam. What should be the preparation strategy for AIPMT 2014 in these remaining 4 months?

Shiv Pratap Raghuwanshi: Students should look for their weak areas in various subjects and strengthen them, in may be, next one month. Then, revise the whole syllabus in next two months widely and extensively. Finally, in last month before the examination, one should opt for selective and intensive study of important topics in various subjects.

Students should also carefully read text books of XI and XII NCERT and the last 5 years papers of AIPMT to get full insight of pattern of the papers as many a time same questions are repetitively asked in the exams.

Careers360: Which books would you suggest for preparation?

Shiv Pratap Raghuwanshi: I think NCERT XI & XII and Exemplar XI and XII books in Biology should make the core of your preparation. To unfold NCERT and for extra content you must read text books like Elementary Biology by K N Bhatia and M P Tyagi, Modern Botany by M P Kaushik and Modern Zoology by R L Gupta, to name a few.

Careers360: What do you think, will AIPMT 2014 be easy than NEET 2013? If not then what could be the possible level of difficulty?

Shiv Pratap Raghuwanshi: I don't think so. It is expected almost of the same difficulty level. As per the official declaration both the exams are based on NCERT then the level should be almost same but in AIPMT, the emphasis is on conceptual questions. So, one must practice for questions based on diagrams given in NCERT text and concepts. This can be the key to success for students taking AIPMT 2014.

Careers360: Please share a few tips for AIPMT 2014 aspirants. What are the Do’s and Don’ts?

Shiv Pratap Raghuwanshi: Students should stick to basics. Try to strengthen fundamentals. They have to memorize few things in different subjects but they should try to understand and enjoy learning rather than making it a boring exercise. Keep believing in yourself keep studying and keep enjoying. Don't try anything new till it becomes absolutely necessary.

Statement based questions and mixed questions create problems for students so one must prepare for such questions very sincerely.

(2) Short revision charts for each chapter.

(3) Self evaluation by practice test papers.

(4) Student should not be depressed or overconfident.

Careers360: What in your purview should be the key areas in AIPMT 2014 exam? What are the possible areas where an aspirant can score more?

Shiv Pratap Raghuwanshi: The vital areas in Biology include Cell Biology, Animal and Plant Physiology, Genetics, Applied Biology, Ecology and last but not the least Animal and Plant Kingdom. Although the entire Biology section (including 90 questions out of total of 180) is scoring but relatively easy, information based, less time consuming and hence comprise the scoring questions. These questions usually appear from Cell Biology, Applied Biology, Ecology and Animal & Plant Kingdom.

Reading is important but revision is even more crucial. So have fortnightly revision program. Revision tests can be helpful. Students should focus to NCERT diagrams, graphs, statements related to label & examples with concepts. As per Zoology is concerned Human Physiology, Reproduction and Reproductive Health, Evolution, Human Health and Welfare, and Structural Organization, Animal kingdom; every topic has its own significant role in marking.
Some important Botany topics are - Biotechnology Principles, Processes and Applications, Plant Kingdom, Photosynthesis, Ecosystem, Organism and Population, Environmental Issues, Cell Biology, Heredity and Variations, Molecular Basis of Inheritance, Plant Morphology.

AIPMT 2014 Application Error: Arunachal Pradesh does not seem to exist for CBSE!

How to fill AIPMT 2014 Application