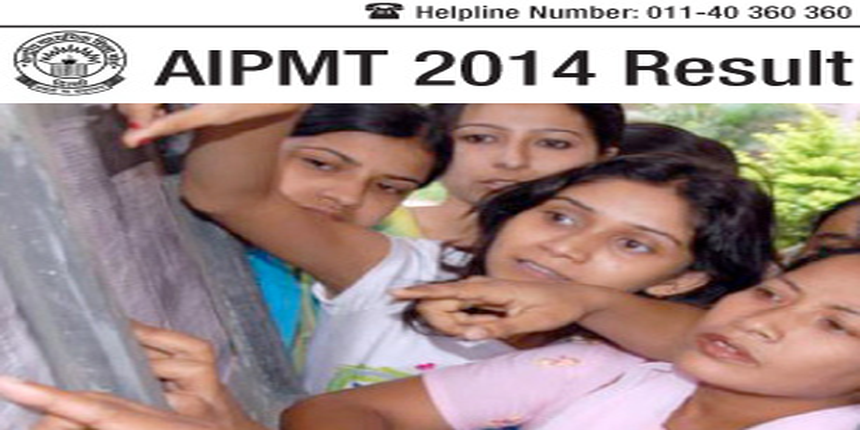 On the basis of AIPMT 2014 result, CBSE will prepare merit list of the eligible and successful candidates. Accordingly, candidates will be called in AIPMT 2014 counselling for admission to the 15 % of total seats in the Government Medical/Dental Colleges of India excluding Andhra Pradesh and Jammu & Kashmir.

You can use AIPMT 2014 College Predictor and know which Medical or Dental College you will get on the basis of your AIPMT 2014 Rank.

Click here to check which Medical & Dental colleges you can get in your domicile state based on your rank.

Medical Seats to be filled through AIPMT 2014 Result:

According to officials, AIPMT 2014 merit list will be based on AIPMT 2014 Cut off. AIPMT 2014 result will be equal to the number of seats available for allotment in MBBS/BDS courses under 15% All India Quota. There shall also be a waiting list equal to 4 times of the merit list. The list of successful candidates (Merit List/ Waiting List) shall be forwarded to the Directorate General of Health Services (Medical Examination Cell), Ministry of Health and Family Welfare, Government of Indiafor the purpose of allotment of seats by Online Counselling.

According to CBSE, as many as 6, 16,982 candidates registered for the AIPMT 2014 exam which was held on May 4, 2014. However, the total number of candidates appeared for the exam was 5, 23,701. Apart from the CBSE, various coaching institutes has released AIPMT 2014 answer key of all the version of AIPMT 2014 Question Booklet.

The Cutoff score of AIPMT 2014 entrance exam has been declared by CBSE.  AIPMT 2014 Cutoff is a predetermined minimal score which is required for admission in 15% of undergraduate Medical and Dental course seats in Government Medical and Dental Colleges across India, except Andhra Pradesh and Jammu & Kashmir.

CUT - OFF SCORE for counselling under 15% All India Quota Seats 2014 are given below:

According to candidates and experts, the AIPMT 2014 exam was moderate in terms of difficulty level with most candidates finding Physics to be toughest among the three sections.

hello i got neet pg rank 57233 under general category.i wanna to go for general medicine ,Paediatrics , pulmo medicine . can u give me some suggestion abt how to go for choosing the branches in counselling

Going by previous All India cut offs and your rank you may have decent chances in the Santosh Medical College for Pulomnary Medicine. With your rank, it is tad difficult for General Medicine and Paediatrics.Having said that, this is 2019 data and cut offs change every year depending on various factors such as no.of Candidates appearing for the exam, no.of Candidates qualified, difficulty of the exam, and no.of seats available for each specialisation. Please try our College predictor to check the possibility of other specialisations with you rank across India:  https://medicine.careers360.com/neet-pg-all-india-college-predictor

Hi aspirant!
NEET indeed is a very tough exam to crack. You simply have to work harder than before. It may be tough, but is not impossible. Please go through the below link to get preparation tips for the NEET exam. Hope it helps.