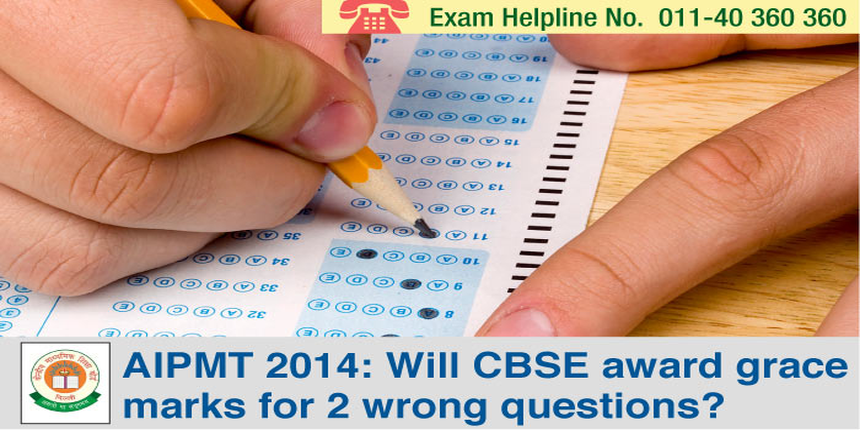 With experts confirming 2 wrong questions in AIPMT 2014 question paper, over 6 lakh candidates who took the national level exam on May 4 are yet to get a confirmation from exam conducting body CBSE on whether they will be awarded grace marks for the wrong questions or there would be penalty for marking the answer options.

According to top Medical coaching institutes, Chemistry section of the All-India Pre-Medical Test –AIPMT 2014 carried two questions which didn’t have ‘any options as the right answer’.

While releasing the AIPMT 2014 answer keys, different coaching institutes marked the two questions in each of the code as wrong questions. According to such coaching institutes, all the candidates will be awarded grace marks irrespective of their response to the questions.  The AIPMT 2014 paper carried a total of 180 question divided in three sections –Physics, Chemistry and Biology (Zoology and Botany). Each correct answer carried 4 marks and a wrong answer invites one negative mark during the evaluation of the paper, CBSE had said.

For any doubts and queries related to the exam pattern, preparation and other related queries, students can call the AIPMT 2014 Exam Helpline at 011-40360360

Coaching expert C Shekhar said, “In one of the questions, compounds of four molecules were given and students were asked to find the compound of the molecule. The option given was wrong because all options had the choice of two molecules together. The second question was wrong since none of the option had the structure that could prove to be the right option for the given question.”

The questions whose options were incorrect in the AIPMT 2014 entrance exam paper are given below:

Q. Which of the following compound will undergo racemisation when solution of KOH hydrolyses? - Click Here

Q. Which of the following orders of ionic radii is correctly represented? - Click Here

Despite various experts and exam takers confirming the wrong questions, CBSE is yet to officially announce its stand on the same. Though, experts have advocated for 8 marks grace for all who appeared for the exam, candidates are yet awaiting an official confirmation on the same.

The grace marks are, however, are unlikely to affect the overall result and cut-off as an additional 8 marks to all candidates will neither make any impact on the merit list not on the cut-off for different medical institutes.

However, candidates cried foul as some of them said that they invested their valuable test time on solving a wrong question that finally proved to be wrong. Vineet kumar, who took AIPMT 2014 at a Delhi Centre on May 4 said, “After I find that those two questions were wrong, I feel those candidates who did not attempt those 2 questions and instead solved the other questions would be taking edge over me.” He rued, this is unfortunate and I am afraid that despite performing well, attempting the wrong question and putting my time on the same may push my overall relative performance down.

Vineet Jaglan who appeared for AIPMT 2014 from Panipat said that CBSE must officially announce the grace marks to be awarded for the wrong questions and also release the provisional answer key prior to release of images of OMR Answer Sheets, which will be displayed for any days from May 25 to May 31, 2014.

AIPMT 2014 score will be the basis for admissions to Bachelor of Medicine and Bachelor of Surgery (MBBS)/Bachelor of Dental Surgery (BDS) programmes under 15 % All India quota seats in all Government Medical colleges across India excluding Andhra Pradesh and Jammu & Kashmir.

CBSE is likely to release category-wise all India merit list and cut-off for admission to MBBS seats under its 15 % All India quota in the first week of June, 2014. According to Medical Council of India, there are 21, 373 MBBS seats in Government Medical colleges across India excluding Andhra Pradesh and Jammu & Kashmir. The 15% of these MBBS seats will be filled on the basis of AIPMT 2014 merit.

The result of AIPMT 2014 will be declared on or before June 7, 2014. On the basis of AIPMT 2014 result, CBSE will prepare merit list of the eligible and successful candidates. Accordingly, candidates will be called in AIPMT 2014 counselling for admission to the 15 % of total seats in the Government Medical/Dental Colleges of India excluding Andhra Pradesh and Jammu & Kashmir.

Stay tuned to medicine.careers360.com for more news and feature articles on AIPMT 2014.

Sir/Mam,I have passed my Higher Secondary Education in 2018 and now I am appearing for NEET Examination..please tell me the code what I have to keep.. and I am from Andra Pradesh. .

I cant solve many chemistry questions of neet mock tests . I feel so discouraged. What should i do in order to get better at solving?

neet paper contains 45 question.so there is  a possibility that you would be confident in  some field of chemistry.try to focus on those part first.if you can solve those question then automatically you will see that you would get answer for the difficult question.try to figure out your strength and weekness.because neet is all about different type of strategy that must be implemented during examination.

To be eligible to appear for NEET you need to complete your 10+2 with Biology/Biotechnology, Physics, chemistry and English from a recognised board or university.
And a candidate belonging to general category must have passed with atleast 50% in 10+2 for SC/ST it is 40% and for PwD category it is 45%.
There is no upper age limit but the minimum age must be 17.5 years.
Right now this is the Eligibility criteria for NEET. So you must study the following subjects in your 10+2 and prepare for NEET.
Read More
Answer
Answer Later
Report
14 Views