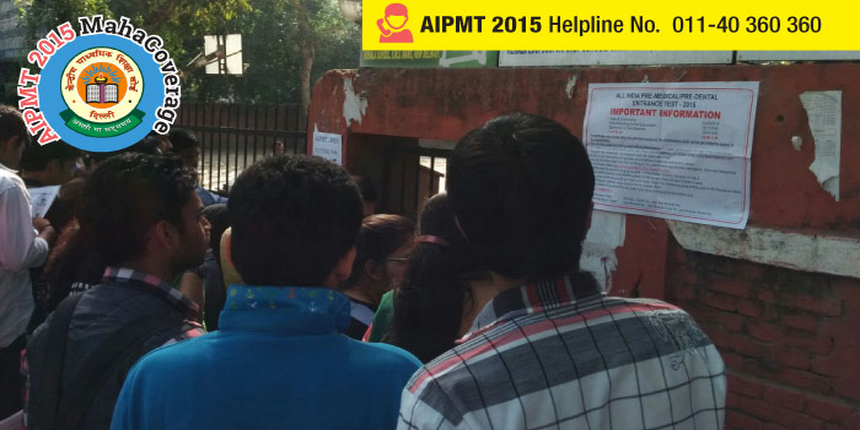 AIPMT 2015 entrance exam was conducted on May 3, 2015 at different centres across the country. According to candidates and experts, the exam was ‘moderate to difficult’ in terms of difficulty level with most candidates finding Physics to be toughest among the three sections.

According to CBSE, over 6, 00,000 candidates had registered for AIPMT 2015 for 15% all India quota seats in Government Medical colleges across India excluding Andhra Pradesh, Telangana and Jammu & Kashmir.

Following is a brief analysis of AIPMT 2015 by Resonance:

AIPMT 2015 was conducted in one paper consisting of 45 questions each from Physics and Chemistry, and 90 questions from Biology which consists of Zoology and Botany subjects. Exam was conducted on 3rd May 2015 from 10:00 am to 1:00 pm.

Given below is the subject wise detailed analysis of AIPMT-2015 question paper.

The Cut-off of AIPMT – 2015 is estimated on the basis of Previous Year Data and Toughness Analysis of AIPMT – 2015 Paper by Resonance Experts. These are not official data released by Authorities concerned.

The paper pattern was same as last year with 180 questions each worth 4 marks. All questions were objective type with single correct option. If we talk about subject wise then there were 45 questions from Physics and Chemistry, and 90 questions were from Biology (Zoology and Botany combined).

In this analysis we have rated every question on a scale of 1 to 3. The ratings are done by expert faculty of Resonance. The individual ratings are then averaged to calculate overall difficulty level.

Difficulty Level Analysis: No of Questions

Resonance Experts feel that overall difficulty level was a bit higher than last year. Subject wise, Biology and Physics was on tougher side, while Chemistry was on easier side.

While around 268 Marks can be considered easy overall, 336 marks were of moderate difficulty and 116 marks are considered difficult by Resonance Team. Overall, it is felt by Resonance Faculty Team that paper was on tougher side compared to last year and the cut-off is expected to be lower than that of last year.

Stay tuned to medicine.careers360.com for more news and feature articles on AIPMT 2015