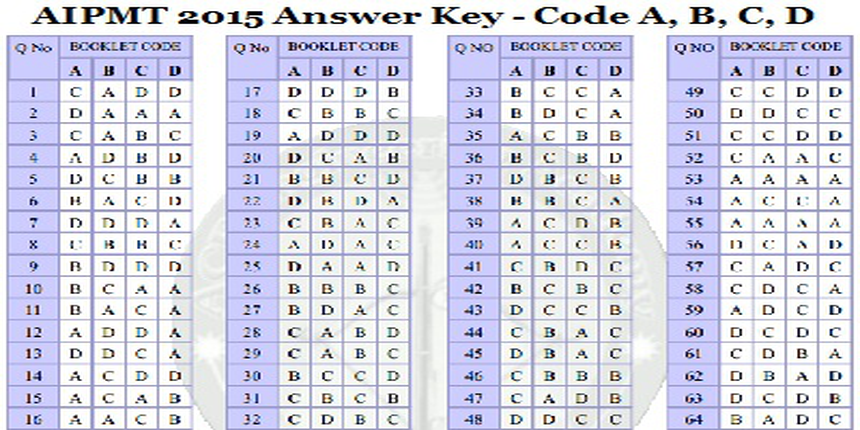 Latest: AIPMT 2016 Answer Key will be available on May 1 after the exam. Candidates can predict their expected AIPMT rank through AIPMT 2016 Rank Predictor.

The medical coaching institutes has released AIPMT 2015 retest answer key for code A, B, C, DCandidates can download AIPMT 2015 answer key of Aakash, Allen, Brilliant, Career Point and other from the table below.

Candidates can know the correct answers and analyze their marks with the help of AIPMT 2015 Answer Key. You can download AIPMT 2015 retest Answer Key for all sets of question bookletfrom the table given below. This year CBSE made test booklet code region wise, Northern Region had code A,B,C & D while Mumbai, Eastern and Western region had W,X,Y& Z code.

CBSE will also display the images of OMR Answer Sheets and Responses graded by the Machine of all the candidates before the declaration of AIPMT 2015 result. Candidates can challenge AIPMT 2015 OMR answer sheets in online mode by paying requisite amount.

AIPMT 2015 Exam Pattern – In AIPMT 2015, there were 45 questions from each section of Physics, Chemistry and 90 from Biology (Botany and Zoology.) For each correct answer candidates will get 4 marks and 1 mark will be deducted for each wrong answer.

How to Calculate AIPMT 2015 Score: The score of AIPMT 2015 can be calculated by following procedure.

The result of AIPMT 2015 will be declared on or before August 17, 2015. Based on the AIPMT 2015 result centralized online counselling will be conducted tentatively in the month of July for admission to approximately 3200 MBBS and 300 BDS seats at 130 Government Medical and 30 Dental Colleges of India.