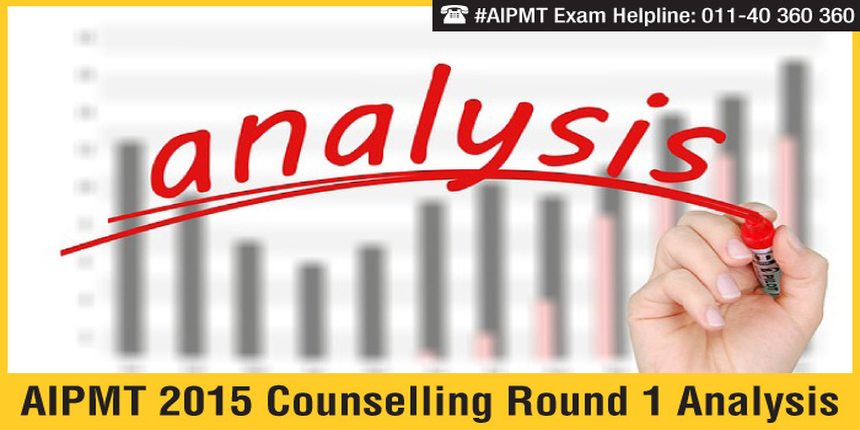 The first round of AIPMT counselling, which concluded on August 23, reflected a fall in the MBBS cut off rank for General and OBC category candidates by nearly 1000 ranks as compared to the previous year.

According to officials, 18,610 candidates have participated in the AIPMT 2015 Counselling Round 1 for as many as 3,200 MBBS and 250 BDS seats in 159 medical and 28 dental colleges of India, respectively, under 15% All India Quota excluding seats in colleges of Andhra Pradesh, Telangana  and Jammu & Kashmir.

The graph given below shows the comparative analysis of the cut off for AIPMT 2015 and 2014  in counselling round 1.

A total of 22 aspirants in the top 100 ranks did not participate in the AIPMT 2015 counselling, which is comparatively more than the previous year when a total of 14 candidates opted out of the counselling process. This increases the chance of other candidates with lower ranks of getting seats in further rounds of counselling.

Most Preferred Medical College of India in AIPMT 2015 Counselling Round 1:

All MBBS seats in below mentioned medical colleges have been allotted in the first round of AIPMT 2015 counselling. Interestingly, this year, too, students have shown preference for the same medical colleges as last year.

You can check the top 6 most preferred Medical Colleges of India from the table given below. The classification of these top 6 Medical institutions is based on student preference.

Most of the candidates in the top 100 AIPMT 2015 rank holder list opted for MAMC. MAMC has been followed by VMMC and Safdarjung Hospital and University College of Medical Sciences as the most popular colleges among the medical aspirants.

AIPMT 2015 counselling Round 1 started on August 19 and the counselling will continue for two more rounds i.e 2 and 3. The facility for registration, choice filling and choice locking for counselling Round 1, 2 and 3 was available from August 19 to 21, 2015. Allotment of MBBS and BDS seats has been done only for those candidates who had filled and locked choices within the stipulated dates. As per MCC officials, there will be no fresh choice filling for candidates in Round 3 as the new MBBS/BDS seats have already been approved by the Medical Council of India and added in the counselling seat matrix by the MCC. The result of counselling round 2 and 3 is scheduled to be declared on September 2 and 10, 2015. AIPMT 2015 counselling will finally conclude on September 17 with transfer of vacant MBBS and BDS seats to respective states.

Overall, as many as 50,000 candidates qualified the test for counselling process for different medical colleges which fill their capacity on the basis of AIPMT 2015 result. The Qualified candidates have to further complete the formalities with the respective Counselling Authorities, such as, DGHS, Medical Education Directorates of States, AFMC, Institutions and Universities, etc. for admission to MBBS/BDS Courses.

Stay tuned to medicine.careers360.com for more news and feature related to AIIMS MBBS 2015