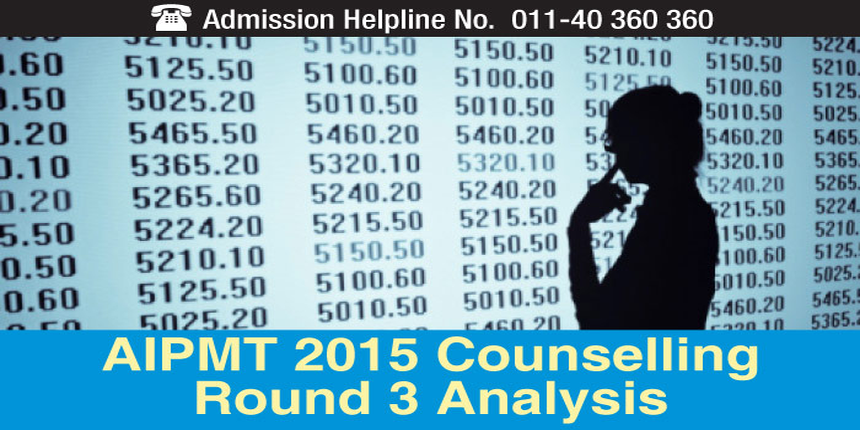 The third round of AIPMT counselling, which concluded on September 10, reflected a rise in the MBBS cut off rank for both General and OBC category candidates by nearly 620 ranks compared to the previous year.

Despite a fall in the cut off ranks by 1000 and 800 in AIPMT counselling round 1 and 2, respectively, AIPMT 2015 cut off is still higher compared to last year.

Last year, the MBBS closing rank for general category candidates was 5646 while for BDS it was 7283.

The graph given below shows comparative analysis of AIPMT 2015 and 2014 cut off ranks under different categories candidates.

Till third round of counselling, approximately 2700 seats were allotted to candidates as per their rank and preferences.

886 MBBS and 113 BDS seats have been allotted and 966 seats upgraded during counselling round 3. The last date for candidates to take admission to the allotted medical and dental colleges is September 15, 2015

Candidates can check the highlights of AIPMT 2015 counselling round 3 from the graph given below:

AIPMT 2015 counselling was done for as many as 3500 MBBS and BDS seats. AIPMT 2015 counselling Round began on August 19 and finally concludes on September 15 will transfer of vacant seats to respective states. It is for the first time there were no fresh choices filling for candidates in Round 3 as the new MBBS/BDS seats have already been approved by the Medical Council of India and added in the counselling seat matrix by the MCC. Number of MBBS and BDS seats available for AIPMT 2015 is represented in the graph given below.

Highlights of AIPMT 2015 Counselling Round 1 -

AIPMT 2015 was conducted on July 25 after it was cancelled by the Supreme Court due to paper leak on May 3. According to officials, a total of 3,74,386 candidates appeared in AIPMT 2015 retest out of which 1,80,957 were boys and 1,93,429 were girl’s candidates. Overall, as many as 50,000 candidates qualified the test for counselling process for different medical colleges which fill their capacity on the basis of AIPMT 2015 result.