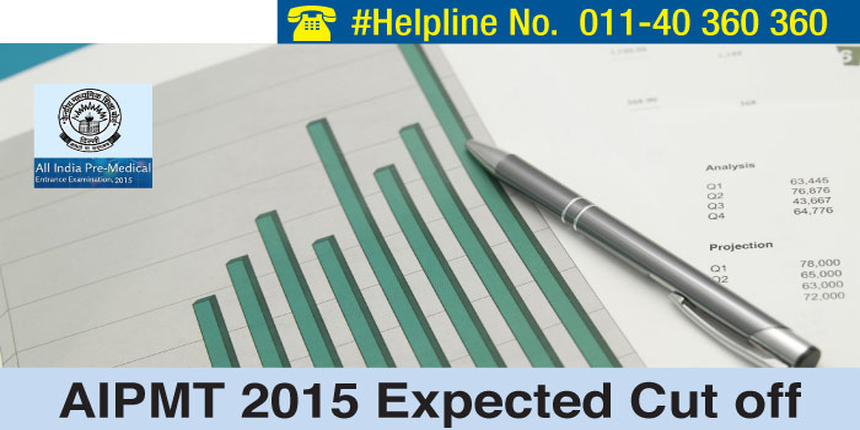 AIPMT 2015 expected cut off -  As AIPMT 2015 Result has been declared on August 17, 2015, Careers360 brings you Cutoff Trend for the most coveted medical entrance exam and AIPMT  Cutoff for 2015 admissions in medical and dental programmes in top colleges in India. The result of national level medical examination, AIPMT 2015 is the basis for admission to 15% of the total undergraduate Medical and Dental programme seats in Government Medical and Dental Colleges. As per the official data, this year around 6 lakh candidates have appeared for AIPMT.

Last year, a total of 18,115 candidates had qualified for 15% All India Quota Seats for 3,084 MBBS and 297 BDS seats in 123 Government Medical and 29 Dental Colleges of India respectively, excluding Andhra Pradesh and Jammu & Kashmir. Candidates can check the cut off score, marks and rank range of qualified candidates below. Before that, it is necessary for the candidates to understand the meaning of all the three terms in order to have clarity on how much should they score to secure admission in their choice of medical institute.

Marks range includes a range of scorers from the highest to lowest within a category. For example, in the case of last year's AIPMT  cut off, 682 was the highest score while 438 the lowest within the unreserved category. The marks range forms the basis for rank range. The examination authority draws out top 15% scorers among the qualified candidates in marks range in order to get rank range. Therefore, the rank range is the number of candidates qualified in different categories for 15% all India quota seats. AIPMT counselling is done on the AIPMT rank range.

For admission to MBBS seats, the cut off score for unreserved category candidates in the third round of Counselling was 5,646 while for BDS it was 7,283. The last year category-wise cut off rank for MBBS and BDS is shown in the graph given below:

The table below shows the number of MBBS and BDS seats available at various phases of AIPMT 2014 counselling.

Here we bring you cutoff marks for some of the top medical and dental colleges of India based on students' preference for admission through online counseling.

Closing rank is the rank where admission to particular medical college stops after first or subsequent round of counselling.

AIPMT 2014 opening and closing rank some of the well-known Medical Colleges is given below:

On the basis of AIPMT result, CBSE prepares merit list of the eligible and successful candidates. Accordingly, centralized online counselling to be done for admission to the 15 % of total seats in the Government Medical/Dental Colleges of India excluding Andhra Pradesh, Telangana and Jammu & Kashmir.

The duration of AIPMT 2015 was of 3 hours. AIPMT 2015 exam question paper consisted of 180 Multiple Choice Questions having 45 questions from each section including Physics, Chemistry and Biology (Botany and Zoology). While each correct answer carries 4 marks, 1 mark is to be deducted for a wrong answer.

Stay tuned in to medicine.careers360.com for more news and articles on AIPMT 2015

Why mock tests are important for medical exams

Why NCERT Books are Important for AIPMT