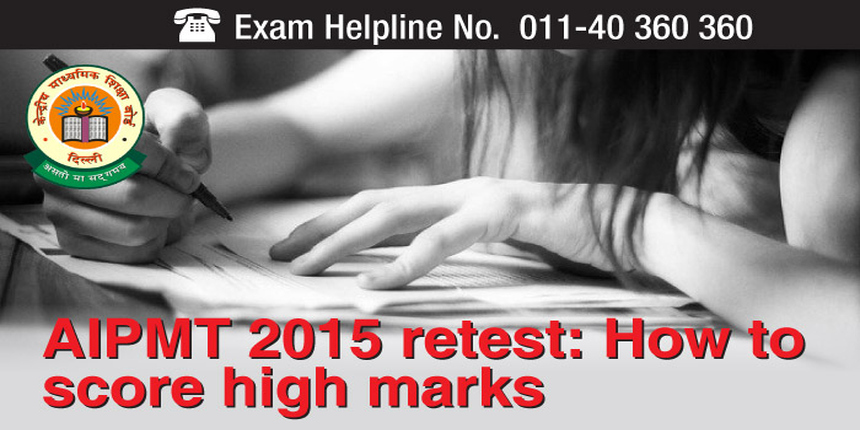 While AIPMT 2015 re-test has necessitated yet another month of hectic exam preparations for you, it has also brought an opportunity to re-shape your preparation towards a better performance on July 25, the re-examination date announced by CBSE.

So, how do you take this opportunity to perform better? What could be your special efforts to boost your performance during AIPMT re-test?

As you are now aware with your weaknesses during the AIPMT 2015 test, you can improve upon the same. Careers360 here brings you 5 keys to enhance your performance in the AIPMT 2015 Re-Test.

Don’t go for entire syllabus; Revise as much as possible

Since you have already prepared for AIPMT and appeared for the test also, you should try to polish your strong areas first. Revising all that you have prepared well all through the year will help you to take the re-test confidently.

Still if time allows, go for the topics where you committed silly mistakes in actual AIPMT paper on May 3. But, starting a topic from scratch is not advisable at this stage.

AIPMT re-test was announced at a time when the candidates were looking for AIPMT results. Undoubtedly, the cancellation of the exam weeks after the AIPMT exam on May 3 pestered most of the candidates. But, again the July 25 re-test is a reality and you have to get back into the exam mode.

So, get cracking into the exam mode with a disciplined schedule of at least two mock tests per week before the AIPMT Test. It will not only help you to get back your preparation pace, but also bring your time management tricks back to your fingertips.

Regular mock tests will also help re-craft your preparation strategy for the remaining days before AIPMT Re-Test. After each mock test, you should also analyse the amount of time taken to solve the paper and what could be the possible change in your paper-solving strategy to maximise accuracy while keeping the number of attempts high. Also, gather quick feedback from your mentor on regular basis so that you can focus on the required areas.

By now, you must have analysed your weak areas and strong areas in all three subjects. Since, you are getting just a month long time to prepare for the re-test; you should keep focussed on your strong areas. A better clarity into the topics that your already understand well will definitely boost your score.

Further, you can also attempt a few weak areas which you could not focus during last lap of your preparation earlier. But, taking all weak areas in your preparation plan may require a lot of your precious time at this stage. Therefore, you need to be very selective in choosing a few more topics that you can work on to make it your strong hold.

The retest of AIPMT 2015 is an opportunity for you to avoid mistakes which you have committed earlier. As you already have an actual test taking experience now, you can better chart your test taking plan now.

Thus, during the retest preparation, you should keep tab on kind of mistakes you are prone to commit. You need to be very careful towards your mistakes that might be costing you in scoring had you been evaluated for the May 3 AIPMT test.

Keep in touch with your mentor and peer:

At this juncture of AIPMT 2015 retest preparation, candidates must be interacting with mentor and peer group members at least once a day. This does not only help you raise your doubts and queries and get solution for the same but also keep your motivation level high.

Joining a social media group on AIPMT can also help you keep updated with the latest happening around the test. In such forums, you can discuss your preparation strategy and post your problems to get instant solutions from group members.

A re-testing could be the worst thing you wanted after you appear for a test. Still, since you don’t have an option, you have to appear for the test yet again. At this stage, keeping yourself motivated is very important.

You should keep away from negative thoughts around the re-testing or AIPMT testing flaws that resulted in re-testing. This will negatively impact your preparation.

Keep all your energy focussed on performing better and think of a better performance this time around. Look at the positive side -AIPMT 2015 retest is a golden opportunity for you to secure MBBS or BDS seats in government medical and dental colleges of India under 15% All India Quota.

Stay tuned to medicine.careers360.com for more information on AIPMT 2015 Re-Test