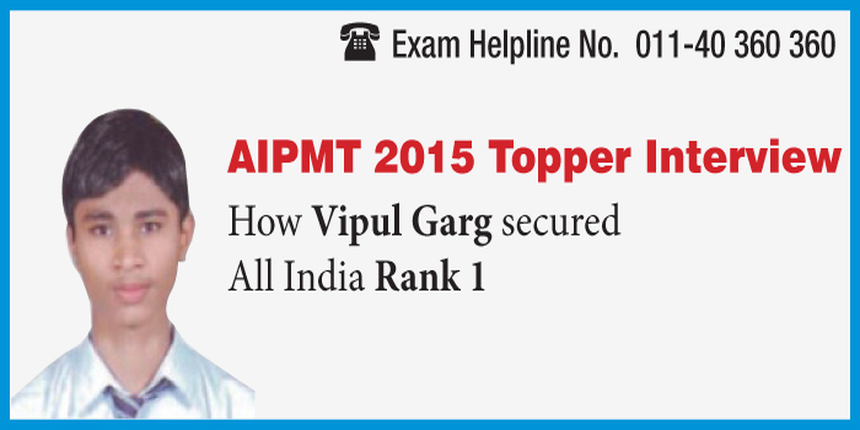 “Success comes only with hard work and perseverance” says Vipul Garg who bagged 1st position in AIPMT 2015 by scoring 695 out of 720. The topper from Jind, Haryana had already secured AIR 4 in JIPMER and AIR 51 in AIIMS MBBS.

Right after AIPMT 2015 result declaration on August 17, Careers360 interviewed Vipul Garg. He comes from a humble family background. His father runs a shop and his mother is a home maker. His talent, however, brought him various scholarships which facilitated his studies and journey to his MBBS dreams.

An avid fan of Lionel Messi, Vipul loves soccer and enjoys outdoor games. Though he regularly interacted with his friends and discussed with them preparation related doubts, he kept away from social media like Facebook. Read the full interview below to know more about Vipul Garg, his hobbies and what brought him AIR 1 in AIPMT 2015 re-test.

Excerpts from the interview:

Careers360: Congratulations for your outstanding performance in AIPMT 2015 bagging AIR 1! How did you celebrate your success?

Vipul Garg: Thank you so much! The credit of AIR 1 goes to my parents, teachers and one of my relatives Dr. Suresh Jain, who is my mentor. This achievement would never have been possible without their support and guidance.

Careers360:Were you sure of cracking the coveted medical entrance exam? How did you make it possible?

Vipul Garg: Honestly, I was confident to crack AIPMT but bagging AIR 1 was not even in my dream. To become a topper in any prestigious national level exam, you need to put endless effort with perseverance. I am happy that my hard work has finally paid off and it brought cheers to me and my family.

Careers360: Tell us something about your family.

Vipul Garg: My father is a shopkeeper and my mother, a homemaker. Both my parents were very supportive all through my preparation phase. They always motivated and stood by me, whenever I needed them.

Careers360: What is your score in AIPMT 2015? Please also share section wise score.

Careers360: What is your rank in other medical entrance exams apart from AIPMT 2015?

Careers360: What was your preparation strategy for AIPMT 2015?

Vipul Garg: I followed a strict and strategic routine while preparing for AIPMT. I studied 7 to 8 hours per day. My self-study hours generally began at night after 10 pm and continued till 3 am.

I worked on the areas where I felt weak and focused more on strengthening the strong areas. I kept on revising chapters, to clarify the concepts of the studied topics.

Careers360: Did you take mock test and did it help you in AIPMT preparation?

Vipul Garg: Yes, I took a lot of mock tests. Regular mock tests helped me to re-craft my preparation strategy as per my ability to solve questions.

After each mock test, I used to analyse the time taken to solve the paper and what could be the possible change in my paper-solving strategy to maximise accuracy while keeping the number of attempts high.

I had done well in most of my mock tests. It fuelled my confidence in the actual examination.

Careers360: Now that you have bagged AIR 1 in AIPMT, what do you think was the key factor behind your spectacular performance?

Vipul Garg: The key factor of my success is my hard work, perseverance and dedication for my dream of becoming doctor.

Besides my teachers’ guidance, I used to revise the topics at night during my self-study which I was taught in classroom. Whenever, I faced any problem, I noted it down and discussed the same with my teachers the day after.

Careers360: Which subject was the easiest and which was the toughest according to you during the preparation period?

Vipul Garg: Physics and Chemistry are two of my favourite subjects and I love to study them. Despite being a Biology student, I found it to be toughest for me especially Human and Plant Physiology sections.

Careers360:Do you think coaching is necessary to crack AIPMT of other medical entrance exams?

Vipul Garg: I think coaching can be helpful as it guides in cracking the exam. The study materials are well crafted based on the prescribed syllabus, helping you in preparation.

Frankly, coaching did help me a lot while preparation but one should not depend on it totally. Along with coaching, one needs to also focus on self-study because at the end it’s your hard work and self-study hours which pay.

Careers360: It would have been quite a busy preparation schedule for you. Could you find time to connect with your friends during your preparation?

Vipul Garg: I live in hostel so friends were always with me. Though we used to chat but our chat topics revolved around exam topics and doubt clearance.

Careers360: Are you active on Facebook or any other social media platform?

Vipul Garg: No, I haven’t used Facebook or any other social media platform for two years. I stayed in hostel so didn’t feel the need and found friends at hand who shared the doubts and participated in discussion wherever and whenever required.

Careers360: Did you turn to any recreational activity before appearing for AIPMT?

Vipul Garg: A day before AIPMT, I visited Qutub Minar. I and my friends spent the complete day in Qutub Minar vicinity.

I believe the best way to lose the fear of exam is to do what you love before a day or two from your examination. It was one of the best days of my life.

Careers360: Which is your favourite sport? Do you play any sport?

Vipul Garg: I play football and I am a big fan of Lionel Messi.

Careers360: Can you tell us who your ideal person is?

Vipul Garg: Dr. Suresh Jain is my ideal person who inspired me to become a doctor. He is my relative and helped me a lot during my preparation. He used to suggest me the books and how to prepare for the medical entrances.

Careers360: Please share your message for AIPMT aspirants who will be appearing for the entrance exam next year.

Vipul Garg: It is important for every medical aspirant to go through NCERT books thoroughly along with other study materials as it helps developing clear concept of the topics. Candidates must devote most of their time towards their studies and focus on every single aspect of the syllabus because no one knows what type of questions may come.

Careers360: Which is your preferred medical college and medical branch?

Vipul Garg: I am looking forward to grab a seat in prestigious Maulana Azad Medical College (MAMC). In future, I want to pursue Cardiology or Neuro-science.