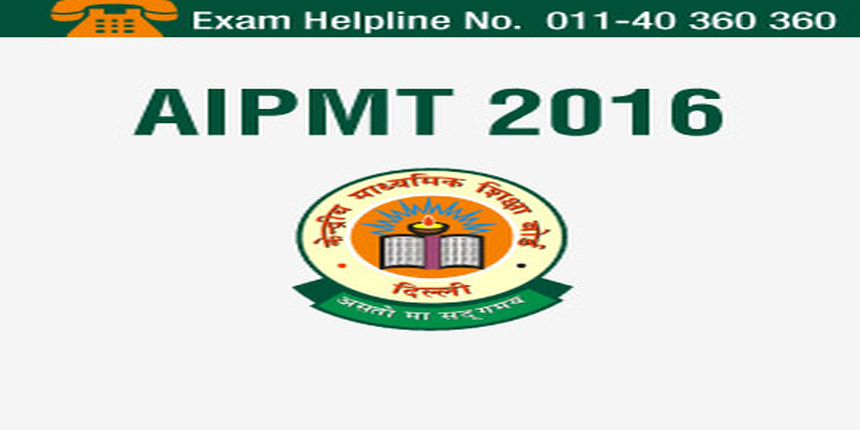 AIPMT 2016 - Central Board of Secondary Education (CBSE) has conducted All India Pre-Medical Test (AIPMT)/NEET 2016 Phase 1 on May 1, 2016  for providing admissions to 52,305 MBBS and BDS seats in all government, private, state, deemed universities/colleges of the country. As per the Supreme Court, candidates who have participated in NEET exam Phase 1 conducted on May 1, 2016 can participate in the stage 2 examination on July 24, but with a condition that they have to give up their NEET Phase 1 candidature.
Related Post -
NEET 2019
NEET Eligibility Criteria 2019
NEET Application Form 2019
NEET Admit Card 2019

AIPMT 2016/NEET 2016 Phase 1 has been conducted in pen & paper mode at various designated exam centres across India for undergraduate medical and dental seats under 15% All India Quota. On this page candidates can get a complete set of information about AIPMT 2016 entrance exam such as its exam pattern, application form details, exam dates, eligibility criteria, seats & reservation, admit card, results, important dates and preparation tips.

The graph given below shows the number of MBBS and BDS seats of last two years.

AIPMT MBBS and BDS Seats | Create your own infographics

AIPMT 2016 Eligibility: Candidates must fulfil the minimum eligibility requirements at the time of applying for AIPMT 2016. The highlights of AIPMT 2016 eligibility which includes educational qualifications and age criteria is mentioned below.

How to Submit the AIPMT 2016 Application Form

Read Also: Step by step guide for how to fill AIPMT Application Form 2016

Important Dates for AIPMT 2016: The application procedure of AIPMT 2016 began on December 15, 2015 and entrance exam has been conducted on May 1, 2016. Candidates can check important dates from the table given below.

AIPMT 2016 Admit Card is available to download from April 7, 2016. To download admit card candidates have to enter their exam registration number and password. The admit card is an important documents which will have candidate’s detail  like their exam roll number, category, photograph, signature, name and address of the allotted exam centre, etc. Without the admit card candidates will not allowed to take test. The AIPMT 2016 admit card must be preserved by candidates till the completion of admission process as it will required at the time of counselling and admission process for identity verification. Candidates are advised check all the entries in the admit card. In case of any discrepancy, candidate should immediately inform the exam conducting authority.

Exam Day Guideline: Candidates are advised to reach their exam centre at least 1 hour before the commencement of exam. Examination Hall will be opened 45 minutes before the commencement of the test. Candidates are advised not to carry any textual or digital materials to the examination hall otherwise they shall be deemed to have used unfair practices at examination and marked as UNFAIRMEANS (U.F.M.). Such candidates would be debarred from taking this examination permanently in future and shall also be liable for criminal action and /or any other action as deem fit by the Board.

The salient feature on AIPMT 2016 exam day guidelines are given below. Candidates are advised to follow the instruction strictly otherwise they will not allow for taking AIPMT 2016 exam.

What to carry during AIPMT 2016 Exam: Candidates have to carry their AIPMT 2016 Admit card which have pasted postcard size photograph in the given performa. The passport size photograph affixed in the admit card must be duly attested by a Gazetted Officer/Head of the Institution. Candidates will also have to bring one passport size photograph for affixing on the attendance sheet. The stationary items required during the test will be provided by the exam authorities itself.  The pen for marking in OMR sheet will be provided at the center.

CBSE has released official answer key of AIPMT 2016 before on August 8, 2016. Candidates can challenge any questions or answer of AIPMT through a given prescribed format. They also have to submit the requisite fee for challenging. The fee will be refunded to candidates if examination authority finds challenge is valid and true.

Qualifying Marks: Candidates have to score a minimum marks as prescribed by the examination authority CBSE to qualify the entrance exam. The graph below shows category wise AIPMT 2016 qualifying mark.

The graph given below shows marks based AIPMT last year’s cut off score which was the basis of counselling.

AIPMT 2016 Result - The result has declared on August 16, 2016. The result of only those candidates has been declared who secure the qualifying marks in the exam. The cut off marks to qualify AIPMT 2016 is 50% for general category candidates. Based on the marks scored by candidates, CBSE will prepare merit list of the eligible and successful candidates. As per the rank in merit list counselling will be conducted for admission under 15 % AIQ seats excluding Andhra Pradesh, Telangana and Jammu & Kashmir.

AIPMT 2016 Counselling: The Medical Counselling Committee (MCC), Directorate General of Health Services (DGHS) will conduct AIPMT 2016 counselling for allotment of MBBS and BDS seats under 15% All India Quota. The online counselling of AIPMT 2016 will be conducted in three rounds beginning tentatively in the month of July or August.

AIPMT 2016 Participating States: Many State Governments/Universities/Institutions voluntarily participate in AIPMT 2016 and use its merit list for admission MBBS and BDS seats in their respective Medical Colleges. The responsibility of CBSE is limited to conduct of the entrance test, declaration of result and providing merit list to the DGHS and participating States/Universities/Institutions. A total of 8 states and 4 medical institutions participated in AIPMT 2016 for filling their MBBS and BDS seats.

Last year, AIPMT was cancelled by the Supreme Court of India because of adverse impact on the exam and evaluation process due to 'answer key leak' during exam which was conducted on May 3. The Apex Court has annulled the All India Pre- Medical Entrance Exam after taking into account the petitions filed by parents as well as students demanding re-examination of the coveted medical entrance examination of India. The CBSE had conducted AIPMT retest on July 25 at 1065 exam centres across India.

Central Board of Secondary Education (CBSE)