AIPMT 2016 Answer Key - CBSE has released the NEET/AIPMT Official answer keys on August 8, 2016. Earlier, the exam conducting authority of NEET 2016, Central Board of Secondary Education (CBSE), has provided the OMR Answer sheet of AIPMT/NEET 2016 for both the phases. The scanned images of OMR Answer Sheet was available from August 4 to 7, 2016. Candidates have to download the OMR Answer sheets with the given dates. Candidates are advised to download their NEET 2016 answer sheet so that they can match marked responses with official answer key.  The NEET 2016 official and OMR sheet can be downloaded from the online window given below by entering user ID (Registration No.) and Password. The NEET 2016 phase was conducted on May 1 (AIPMT 2016 renamed as NEET Phase 1) while NEET 2016 Phase 2 was held on July 24 after the Supreme Court order.
Related Post -
NEET 2019
NEET Eligibility Criteria 2019
NEET Application Form 2019
NEET Admit Card 2019 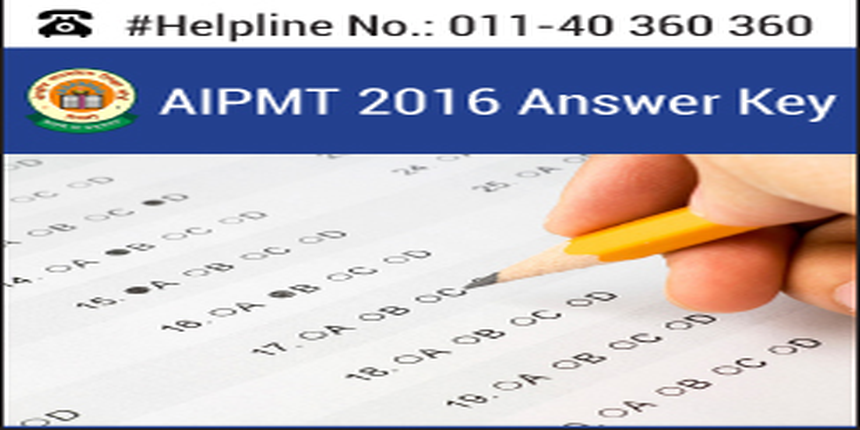 The Candidates willing to challenge the answers keys prepared by CBSE may do so by paying due fee of Rs 1000/- per question challenged through Debit Card/ Credit Card/Net Banking.If challenges and complaints filed by the candidates are found to be genuine, the fee paid against such questions will be refunded. Complaints received after August 10, 2016 will not be entertained under any circumstance. All complaints regarding NEET 2016 Phase 1 and 2 answer keys received will be referred to the subject experts and their recommendations will be deemed as final.

Candidates can check and download AIPMT 2016 answer key released by CBSE and scanned Images of their OMR Sheet by logging to their account through their user ID (AIPMT 2016 Registration Number) and Password.

If candidates have doubt or find any incorrect answer provided by CBSE in AIPMT 2016 Answer Key then they can challenge it within the given dates through online window provided for this purpose. Based on the information mentioned in AIPMT 2016 admission brochure, candidates challenge any answer of AIPMT 2016 official answer key on payment of Rs.1000 per response challenged. If the review authority accepts the challenged answer key then the fee will be refunded otherwise if it will be not be refunded. In case of any discrepancy regarding official AIPMT answer key 2016, decision of the CBSE will be final and no request will be entertained regarding re-checking.

Candidates can Challenge their NEET/AIPMT 2016 Answer Key from below window Or Click here:

Candidates can check below for AIPMT/NEET 2016 Phase-II Answer Key:

Candidates can check below for AIPMT/NEET2016 Phase-I Answer Key:

Candidates can download May 1 exam of AIPMT 2016 answer key and Solutions (All Code - A/P/W, B/Q/X, C/R/Y, D/S/Z) provided by leading coaching institutes like Aakash, Allen, Resonance, Brilliant, and Career Point from the table given below.

Highlights of AIPMT 2016 marking scheme is given below:

Candidates can check the AIPMT 2016 qualifying marks for different categories from the table given below:

Based on AIPMT 2016 cut off score, examination authority will prepare merit list of all the successful candidates. Based on merit list for 15% All India Quota, candidates will be called for counselling for allotment of MBBS and BDS seats (under 15% AIQ) in Government Medical/Dental Colleges of India excluding Andhra Pradesh, Telangana and Jammu & Kashmir.