AIPMT 2016 Cut off – The cut off score is the lowest possible score that candidates must score to qualify the AIPMT 2016 entrance exam. The examination authority, Central Board of Secondary Education (CBSE) has decide AIPMT/NEET 2016 cut off marks based on the availability of seats, number of applicants and difficulty level in the entrance examination. Based on the cut off score number of candidates to be called for counselling under 15% All India Quota Seats. The AIPMT cut off 2016 has been announced with the declaration of result on August 16.

AIPMT /NEET 2016 cut off marks differs every year as it based on the parameters like difficulty level of the entrance exam, number appeared candidates, etc. 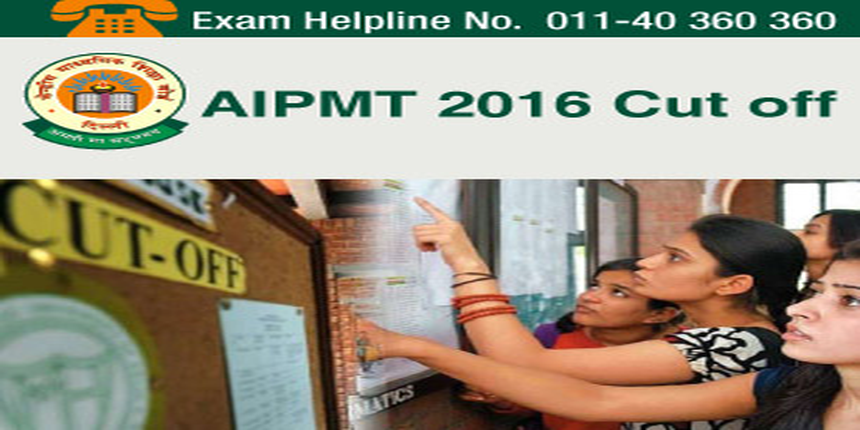 Based on the cut off score, CBSE draws top 15% scorers among the qualified candidates in marks range in order to get rank range. The rank range is the number of candidates qualified in different categories for 15% all India quota seats. AIPMT counselling is done on the AIPMT rank range. While the marks range includes a range of scorers from the highest to lowest within a category.

Last year AIPMT Cut off Score: Candidates can check the AIPMT 2015 cut off score from the table given below:

According to examination authority CBSE, in case of AIPMT 2016 tie-breaking has followed the below given procedure to resolve the issue.

AIPMT cut off trend of medical and dental colleges of India under 15% All India Quota:

The NEET abhyas app launched by NTA consists of mock test in which there are many questions which are our of ncert. so should i focus in other refrence book or only on ncert and practicing mcqs

Dear Tanya, For NEET, having a good grasp over the NCERT textbooks is a must. All the topics will be from NCERT only. But, while you practise MCQs, you will find that not all answers are found in your NCERT books. NCERT books have all the topics prescribed in NEET syllabus, but everything is explained in brief. So, to be able to answer all the MCQs is NEET, you should be having in depth knowledge on all the topics of your NCERT book.

It is better, if you follow some of your +2 level text books as well, for NEET preparation.

I wish you good luck!