AIPMT 2016 Exam Pattern - Candidates who have appeared for the AIPMT exam are advised to read AIPMT Exam Patten 2016. The entrance exam has been conducted on May 1 by the examination authority, Central Board of Secondary Education (CBSE). The AIPMT exam has been conducted in pen and paper based mode for 3 hours duration in a single session from 10:00 AM to 01:00 PM. The detailed information is given below regarding AIPMT 2016 Exam Pattern like number of questions asked in the paper, subjects, marking scheme, exam duration etc.
Also Read -
NEET 2018
NEET Eligibility Criteria 2018
NEET Important Dates 2018 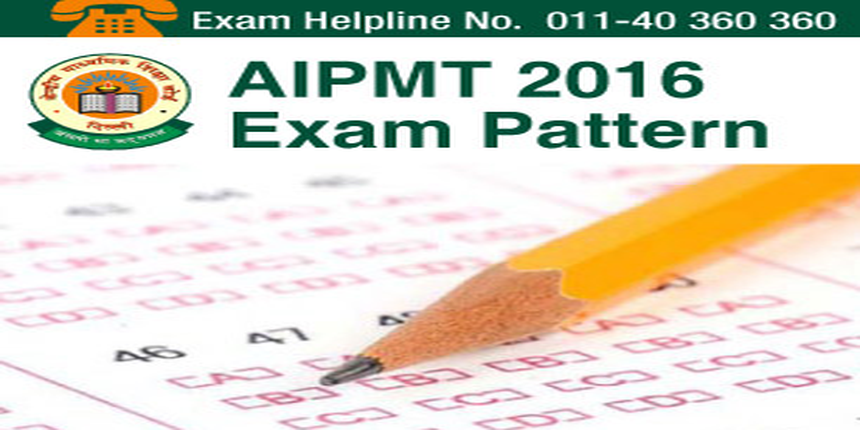 Important Information related to AIPMT 2016 Exam Pattern is given below:

AIPMT 2016 Marks Calculation: The score of AIPMT 2016 can be calculated by following procedure.

AIPMT 2016 Qualifying Marks - Candidates have to score a minimum marks as prescribed by the examination authority CBSE to qualify the entrance exam.  The category wise AIPMT 2016 qualifying marks in terms of marks and percenmtage is mentioned below:

The graph below shows category wise AIPMT 2016 qualifying mark in terms of percentage. Candidates have to score the required percentage to qualify AIPMT 2016.

The last year AIPMT cut marks for 15% All India Quota: The AIPMT 2016 cut off marks for 15% All India Quota will be declared by examination authority CBSE at the time of declaration of result. The table given below shows the AIPMT cut off score of last two years for different categories. In 2015 the cut off score is higher than 2014 for all category candidates. Candidates can check the AIPMT 2015 cut off score marks wise as well as and rank wise from the table given below:

AIPMT is a national level undergraduate medical entrance exam conducted for admission to MBBS and BDS programmes under 15% All India Quota seats in government medical and dental colleges of India except medical institutions in Andhra Pradesh, Jammu & Kashmir and Telangana.

Which are the universities to be applied to get admission through NEET 2020?

Here are the colleges which are accepting NEET :-

For more details follow the following link given below

To prepare for NEET you should follow the following tips:-

Practice from limited and standard books like SL Arora HC VERMA, etc. Dont do too many books. Do limited books, and do it more number of times. Become perfect in them.

Get a good teacher, if you can find ! Teacher is the person who knows what should be done and what should not be done. He/she is the best guide.

Chemistry: NCERT most important. Other than that, for reference, use OP Tandon, MS Chouhan, Himanshu Pandey, Pradeeps, Morrison and Boyd, SN Sanyal etc

BIO: Start with NCERT, . Then go ahead with previous year questions. You can also refer to Trueman’s.

Physics: Start with SL Arora and HC Verma. Then go ahead with previous year Questions directly.

No need to do any other book !!

Practice previous year questions MANY TIMES.Become perfect in them.  you should focus on limited material and do it more number of times !! Many questions ask only basic concepts but a good clarity in them. Self study is definitely most important. But coaching really helps you score more.

Yes, definitely you can post another passport size image of yours, if you do not have the same image/photo as earlier used on application form. But make sure that the image is of  latest date and is not too old, to get difficult during your identification.