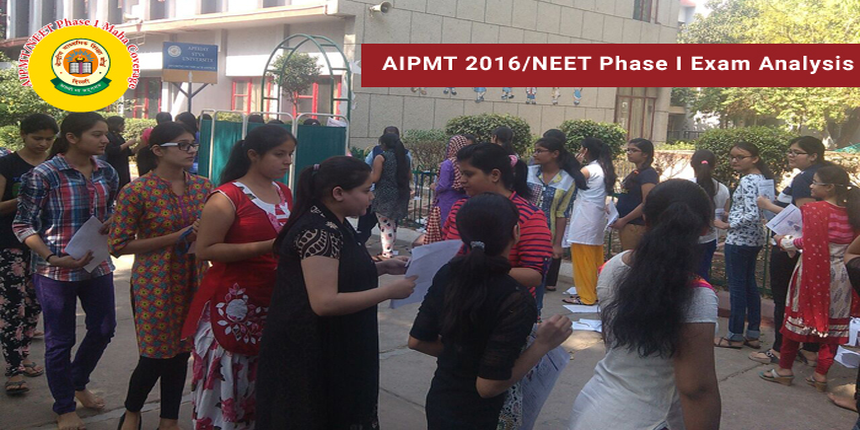 Even as the replacement of AIPMT 2016 with National Eligibility cum Entrance Test (NEET) Phase 1 has caused quite a flutter among those involved in medical studies, the Phase 1 exam drew some mixed reactions from candidates who were unsure about the status of their applications as well as admission. “ I feel like I no longer have a back up, in case, my performance in today’s test is not up to the mark,” said Nalini, a candidate from an exam centre in Delhi. Nalini’s view was echoed by many students who fear that they stand to lose not just admission possibilities but also money spent on registrations for some state- level exams.

However, candidates did not think that the change in the structure of admissions had any impact on the overall paper pattern or difficulty level of the test. As in the previous years, Physics and Chemistry turned out to be the toughest sections while Biology was easy.

Physics turned out to be the demon for majority of the candidates, who were overwhelmed by the large number of numerical questions, which were tricky and consumed exam time. “Physics was very tough for me. In fact, I lost track of time trying to solve some of the questions in Physics,” said Vivek.

Although tough, many students felt that it was something that they were already expecting as Physics had been tough in the previous AIPMT tests, too. Ankita, for whom it was a second attempt, said, “I was expecting physics to be tough and it was something that I was prepared for. Of course, the experience at the exam centre is quite different from when you are taking mock test”

While Physics was tough, Biology came as a relief for most students though Chemistry drew some mixed reactions from students. Soumit from a Delhi centre, said that Chemistry was comparatively easier than Physics. Topics included in this section were Organic Chemistry, Carbon Cycle, Inorganic Chemistry among others.

Further, while physics had some surprising elements in the test which turned out to be tricky for test takers, most of the questions in Chemistry and Biology were from NCERT.

As in previous years, this year, too, Biology was the easiest among all the three sections. One of the main reasons behind it was that majority of the questions in Biology were from NCERT.

“Biology was really easy for me. I had studied the previous years’ sample papers and found that most of the questions were from NCERT. So, I followed suit which turned out to be a good bet!” said Anjana who added that she was expecting to crack the exam.

Experts' view on the test did not differ much from that of the students with the coaching heads putting Physics in the tough slot. While the questions in Chemistry were solvable it was Biology which came as the biggest relief for candidates. Here's Aakash Chaudhry, Director of Aakash Institute, sharing his analysis of the NEET 2016 phase 1 test. Check the section-wise analysis below.

Biology: This section comprised questions of moderate difficulty level. Questions from class XI and class XII were equally divided. A couple of questions were beyond the NCERT syllabus. One of the questions in this section also had all wrong options. Topics like Cytology, Physiology, Genetics and Ecology formed majority in this section. The paper was relatively on the easier side compared to the AIPMT re-test that was conducted in 2015.

While the Supreme Court’s decision to scrap all state level exams got the Central Board of Examination (CBSE) worried about the technicalities of holding the exam in the second phase, what students are most concerned about is whether they stand to lose a back-up option for a medical test and how will the process overhaul impact their admissions.

“I was preparing for AIPMT but I was a bit relaxed because I thought that I had other options in hand if I did not crack this exam after all. AIPMT is one of the toughest medical exams in India. Not every student thinks about actually cracking it. That is the reason we also go for state-level exams,” said Anjana.

For Rahul, the issue was more about the exams he had already applied for and the registration fee he stands to lose in the process, “I applied for UPCPMT. But now if the exam is scrapped will I lose the money I had spent in registration? Not just this exam, students apply for multiple tests and as a result spend a lot of money in the process. Not everybody can afford to apply. What do we do now?”

The Supreme Court’s decision to annul all state level tests and reinstate NEET 2016 as a single National level medical exam came just 3 days before AIPMT was scheduled to be held across India for 15 per cent all India quota seats in government medical colleges. While AIPMT 2016, in itself, has not been scrapped this year, it has been replaced with NEET Phase 1, with another phase of the test to be held in July for students who had to register for AIPMT 2016. Read the full story here.

While the exam name has changed, the pattern of the test continues to be same. AIPMT 2016 had a total of 180 multiple choice questions equally divided among Physics, Chemistry Zoology and Botany subjects carrying 720 marks in total.

Below is the pattern of AIPMT 2015

Stay tuned to www.medicine.careers360.com for more news and updates on NEET Phase1