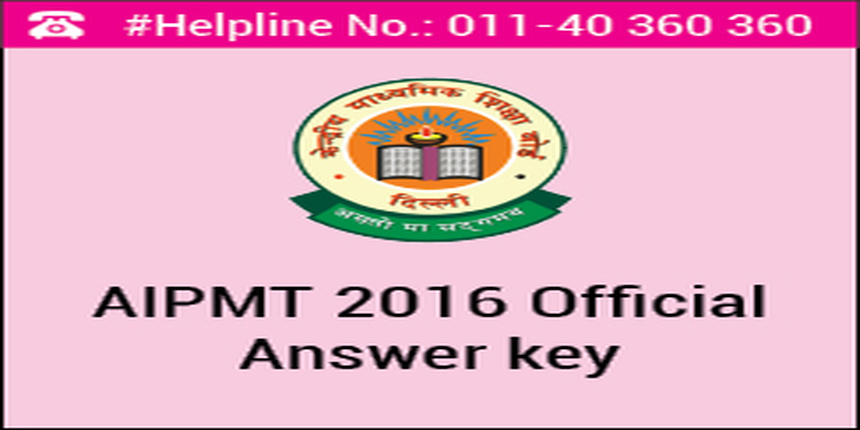 The AIPMT answer key has been released by the various coaching institutes after the exam. This must be noted that as the question paper of AIPMT 2016 has been distributed in 4 different versions, namely A/P/W, B/Q/X, C/R/Y and D/S/Z, the official answer key of all versions will be released separately.

As per the AIPMT 2016 exam pattern, for each correct response four marks will be given and one mark will be deducted for each wrong response. Candidates can know and calculate their marks with the help of AIPMT official answer key 2016.

In case of any doubt/correction, candidates can challenge AIPMT 2016 Answer Key on payment of Rs.1000 per response challenged. The review authority of CBSE will review the doubts/challenges filed by the candidates. The decision of CBSE will be considered final and no request for rechecking of challenges submitted will be entertained.

The result of AIPMT 2016 will be released on August 17, 2016 for those candidates who will score a minimum of qualifying marks in the entrance exam as pre-determined for their respective category.

cut off in neet for B.J.Medical college

You have not mentioned the category you belong to so I am  assuming  you from general category if you belong to any other category then do let me know in comment .

In neet 2019, 610 marks was the lowest marks that was required for general  category for getting a  mbbs seat in B. J. Medical College, Ahmedabad  under Gujarat state quota

You can check the same at:-

But cut off marks  keeps changing every year depending upon various factors like number of students that appeared in the exam, kind of marks obtained by them , toughness level of the examination etc.

So , you should try to get at least 650 marks  to be on the safer side

sir/mam tell me syllabus for neet 2021

It has been announced by HRD Minister that your NEET 2021 will be conducted with reduced syllabus because students are not able to study as both schools and coachings are closed due to lock down caused by covid -19 , and when educational institution will open , the time left will be very less to cover the complete syllabus  but as of now they haven't  notified that which topics  are going to be removed from the syllabus  .

Motion of System of Particles and Rigid body

Magnetic effects of current and magnetism

Dual Nature of matter and radiation

Some Basic Concepts of Chemistry

Classification of Elements and Periodicity in Properties

State of Matter: Gases and LiquidsThermodynamics

General Principles and Processes of Isolation of Elements

Structural Organization in Animal and Plants

Biotechnology and its applications

For more details about NEET syllabus go through  :-

Yes, you should re-upload your passport photograph clearly stating date  when picture is clicked and your name. You should follow following guidelines when uploading your photograph:

Also, Same Passport size and Post Card size photographs are to be used for uploading with Online Application Form and for pasting on Attendance Sheet at the Examination Centre/Counselling/Admission.

If,I failed in physics,does betterment in physics accepted in neet

First of all, in neet there is criteria of percentile nowadays. So no one can be judged on behalf of fail or pass. Now come to part of physics, so being a medical aspirant you should have good grip over physics in order to improve your rank. This will help you alot to get good rank. I suggest you should not avoid it.