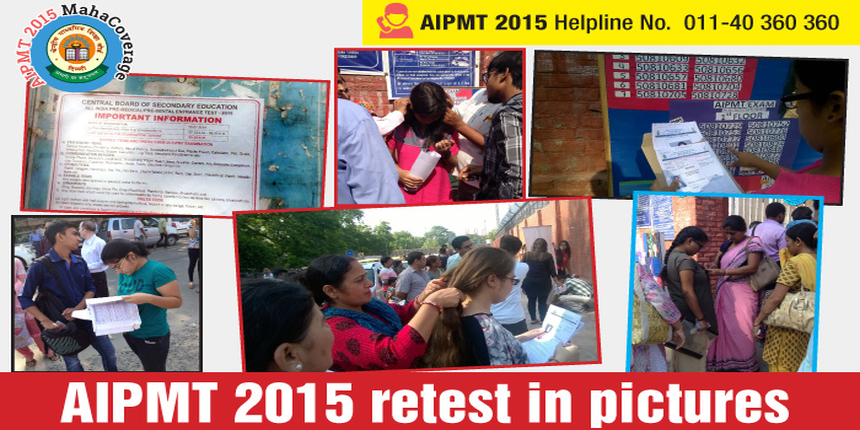 The All India Pre Medical/Dental Test (AIPMT) is re-conducted by CBSE on July 25, 2015 across its centers in India.  The AIPMT 2015 has been scheduled after the exam was cancelled by the Supreme Court on June 15, 2015 due to leakage of answer keys.

The retest of AIPMT 2015 has begun on July 25, amid strict vigilance after its cancellation by the Supreme Court due to leakage of answer keys. According to officials, over 6.3 lakh medical aspirants are competing for 15% All India Quota seats in government medical and dental colleges which are filled on the basis of AIPMT.

Earlier, AIPMT 2015 was held on May 3, 2015 across 1050 exam centres across India in which around 6 lakh candidates appeared for the test.AIPMT 2015 retest will be the basis for admission to approximately 3200 MBBS and 300 BDS seats in as many as 150 Government Medical and 30 Dental Colleges of India, respectively.

#Parents in conversation with Careers360


#Exam Centres: Entry for the candidates started at around 7:30 in the morning. A few students arrived at the center and checked their seating plan.

#Important Information: Instructions for the AIPMT 2015 Retest were pasted outside the center premises. Students were asked to read and follow the same before entering. As per the AIPMT Retest 2015 rules and regulations, water bottle, wallet and watch are also among the list of articles that should not be carried to the examination centres the exam board has notified. Candidates have also been asked to not wear goggles, handbags, hair Pin, hair Band, charm/tabeez, belt, Cap and scarf.

#Seating Plan: After the rules, candidates checked their seating plans according to the roll numbers. Candidates were seen checking their exam rooms.

#And the entry starts: Candidates started entering to the centre gates. Each AIPMT 2015 Retest centre had installed a strict three layer security this time, and made all measurements to avoid any glitch like last time.

#Not Allowed: As part of AIPMT 2015 Retest rules, candidates were not allowed to wear belts. However, a few candidates were seen wearing belts which was removed by the security incharges.

#No High Heels: Many of the aspirants were seen not following the exam instructions. A candidate was asked to remove her high heels, as a part of exam rules.

# Say No to Hair Clips: Not only heels and belts, even the Hair clips were removed as a part of secutity measures. Parents helped their childresn to remove all the accessories that were not allowed in the examination room.

#No Loose Hairs: The security personnel asked this candidate to remover her hair clutcher and braid her hairs. Well, all this again a part of security, as per CBSE guidelines.

#No Blings in the Ears: And there were mothers helping their daughters remove their earings, as a part of exam rules and security measures. As per the CBSE oders and AIPMT 2015 Retest rules, any candidate with watches, hair bans or clips, buttons, full sleeves shirts, shoes will not be allowed to enter the exam premises. A high level of security was followed to avoid any kind of goof-up like earlier, this time.

#Late Entry: Candidates were also notified about the strict entry schedule. The entry started at 7:30 am and it was closed at 9:30 sharp. A few of the candiadtes reached the centres after 9:30 and were not allowed to enter. The gates were closed at the prescribd time.

#The Wait Outside: And as the entry closes, the parents waited outside for the exam to get over, praying for a glitch free exam this time. As per the parents’ reactions, both the students and the parents were happy about the test being re-conducted as it would have been unfai to many of the aspirants. The students followed the same prepration startegy as in the earlier test.

AIPMT 2015 is a national level undergraduate medical entrance exam conducted for admission to MBBS and BDS seats under 15% All India Quota in Government medical and dental colleges of India excluding Andhra Pradesh, Telangana and Jammu & Kashmir. There are also State Governments/Universities/Institutions voluntarily participates in AIPMT 2015 and accept AIPMT 2015 merit list for admission in the Medical Colleges/Dental Colleges against seats under their control.

Stay tuned to www.medicine.careers360.com for more news and updates on AIPMT 2015 Retest