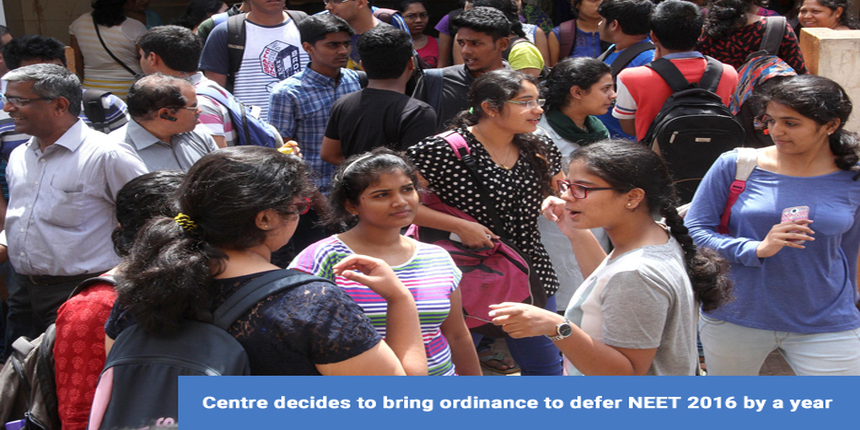 The Centre has decided to bring an ordinance on NEET 2016 to allow States to conduct their own medical entrance exams for the current academic year. The ordinance would overrule the Supreme Court’s judgment to replace all state-level entrance exams with NEET 2016. However, NEET 2016 would still be applicable for 15% All India quota seats and private management institutions.

According to media reports, an official announcement in this regard is expected soon.

Earlier in a meeting with state health ministers and state secretaries held on May 16, the Union Minister noted opinions of different states on implementation of NEET 2016. After the meeting, Nadda said that the centre favoured a fair examination system and NEET was good for medical aspirants. He however said that language issues in the paper as well as syllabus mismatches raised by many states were a valid concern.

The consultation meeting was held after many lawmakers strongly urged for an ordinance to overrule the SC judgment on replacing all state-level and private medical entrance exam with NEET. Read the full story here.

After the NEET 2016 judgement on May 9 where the SC bench refused to allow any state-level or private medical test except NEET, many opposition parties have raised concern over its feasibility for students who were preparing for their respective state-level exam based on their state syllabus. Many Parliament members also said that language barrier in many states may put students from these states at disadvantage in a central test which is only in two languages – Hindi and English.

MPs from many opposition parties including Congress, Trinamool Congress, DMK, AIADMK urged the government to urgently address the issue and pass an ordinance to overrule the SC decision on NEET. Read the full story here.

M Venkaiah Naidu, Parliamentary Affairs Minister, made the announcement in Lok Sabha on May 11, 2016 that the government agrees with the idea of NEET, but it will approach Supreme Court for its implementation from next academic year.  “We are for a common entrance examination, but not from this year. Give time, let the students prepare adequately and then go for the examination. This is the stand of the central government. We will try to convince the Supreme Court,” Naidu said during zero hour in Lok Sabha.