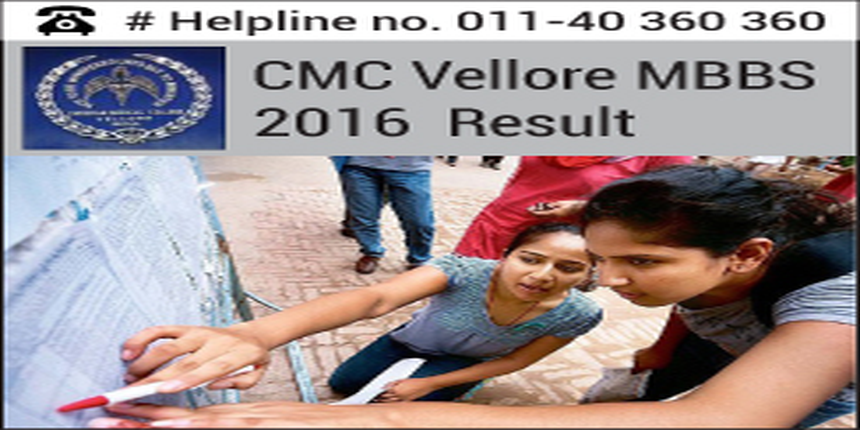 CMC Vellore MBBS 2016 Result: CMC Vellore has declared the results for the second round of admissions, i.e special test and interview result on September 24, 2016. The test and interview were conducted in a three day window, starting from September 21 till 23, 2016. The officials accepted NEET 2016 score to shortlist candidates for the said second round of admissions process. The list of shortlisted candidates eligible for step 2 was declared on September 14, 2016.  The final admission result of CMC Vellore MBBS 2016 has been declared for the students, which they can check below, along with the admission procedure.

I have studied 10th and 12th from new Delhi. I have Aadhar and birth certificate of Lucknow(UP) what should be filled under state of eligibility column in NEET form AIQ

Hey there, good morning. i belong to Muslim religion, category open (general), but as i am Muslim and with open category, is it compulsory for me to select minority as yes in the form because i dont have a minority certificate to show them when needed. i have already selected "No". can i change??

The Information Bulletin says that Candidates who belong to Minority community for example Muslim, Christian, Sikh, Buddhist, Jain and Parsi can select Minority as Yes in the application form. And there is a self declaration form in the Information bulletin in Appendix XIII. You need to download it, fill it up and sign it. And then that will act as a proof of the fact that you belong to Minority community. It's on page 85 at: https://ntaneet.nic.in/ntaneet/ShowPdf.aspx?Type=1F7D662EC0F41DE2013706728E830CBF545FD969&ID=D435A6CDD786300DFF204EE7C2EF942D3E9034E2

how to avoid wrong answers in biology neet exam

The best books for Biology preparation are:

Biology Vol 1 and Vol 2 by Trueman

NCERT Biology Booster by Shri Balaji Publications and NCERT Fingertips by MTG Editorial Baord have topics that are not covered in NCERT.

Human physiology and Genetics have the maximum weightage. Practise questions on Genetics so as to have a thorough understanding of the question pattern. Plant physiology is one easy subject to score. Prepare a comparative table between topics and sub topics of Plant and Animal Kingdoms. And more importantly do not answer when in doubt. You will save negative marking. For any online NEET coaching, you can check our Knock Out package: https://learn.careers360.com/knockout-neet-may/

Shaheen,  be eligible for NEET, you should have completed your 12th with Ohysics, Chemistry and Biology as your core subjects. Even studying Biology as an additional subject will do. But you need to score a minimum aggregate of 50% in Physics, Chemistry and Biology. It is 50% for General Category, 45% for PWD and 40% for OBC,SC,ST. If you fulfil this criteria, you can in general apply for NEET but unfortunately not for 2020 because the application process has been closed by January 6th after extending it once. You may have to wait until 2021.