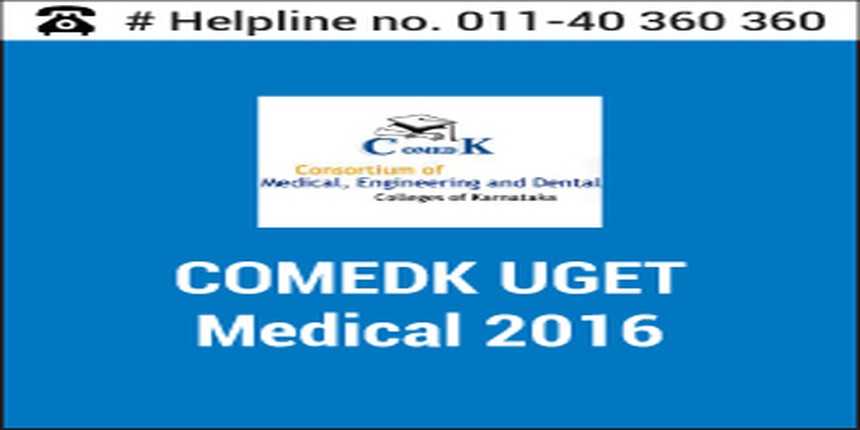 NEET 2016 was conducted by Central Board of Secondary Education (CBSE) in two phases may 1 and July 24, 2016 respectively. The result of NEET 2016 was declared on August 16. The COMEDK UGET Medical 2016 merit list will be based on NEET 2016 score which will be declared by COMEDK for allotment of MBBS and BDS seats in participating medical colleges.

COMEDK cancels medical 2016 entrance exam scheduled to be conducted on May 8 has been cancelled. ...

Hello vinayak,
The comedk is the entrance examination Undergraduate Entrance Test . is a state-level entrance exam conducted by the Consortium of Medical, Engineering and Dental Colleges of Karnataka. The exam is a gateway for admissions to engineering and architecture courses offered by more than 120 colleges/institutes that acceptcomedkscores.
And the venue for the counseling for documents verification will be only in one city.
Last year the venue was
NMKRV College Mangala Mantapa,
3rd Block, Jayanagar,
Land Mark: (near South End Circle),
Bangalore, 560011.
So that venue for the counseling will be only in one city.
And the document verification will be scheduled according to the ranks this process will take approximately 1 month to complete all candidates verification
Hope this helps you
All the best
Read More
Answer
Answer Later
Report
23 Views

Like earlier, students gave different entrance exams for Comedk , Mh Cet , AFMC ,JIPMER etc..along with NEET So I would like to know that which exams we have to give along with NEET for MBBS entrances ? or these all will be conducted according to the rank gained in NEET 2020 ?

Now NEET is the only entrance examination for admission to MBBS colleges across India. Rest all the exams have been scrapped. And even if you want to study MBBS abroad, you need to qualify in NEET.

Hello,
Consortium of Medical, Engineering and dental colleges of Karnataka (COMDEK) is an entrance exam for admission in undergraduate B.E/B.tech and B.arch courses.
The admission for B.arch is based on merit in NATA.
There are 190 engineering colleges offering admission in engineering course in Karnataka through COMEDK.The total number of seats are 20,000.
Read More
Answer
Answer Later
Report
19 Views

I belong to up can I appy comedk

The exam COMEDK is open to all candidates of Indian nationality. So you can appear for the examination even if you are from UP. But before that, you need to meet the eligibility criteria. COMEDK UGET 2020 exam will be held on May 10, 2020. You can check the eligibility criteria through the link below-
http://engineering.careers360.com/exams/comedk-uget
Read More
Answer
Answer Later
Report
23 Views

what is comedk exam? where is it held?can a west Bengal candidate give it from West Bengal?

COMEDK Undergraduate Entrance Test (UGET) is a state-level entrance exam conducted by the Medical, Engineering and Dental Colleges of Karnataka. This exam is a gateway for admissions to engineering and architecture courses offered by more than 120 colleges/institutes that accept COMEDK scores.

COMEDK exam will be conducted in multiple exam centres in 140 cities of India. you will be allowed to select 3 exam centres of your preference during the time of filling up the application form. The exam centre will be given to you on the basis of first come first serve.

Yes, a West Bengal candidate is allowed to give COMEDK. There are three exam centres in West Bengal, you can choose according to your preference.

If you want to know more about COMEDK and its exam centres follow the below link.

View All Questions
Have a question related to COMEDK UGET ?

Your COMEDK UGET brochure has been successfully mailed to your registered email id .