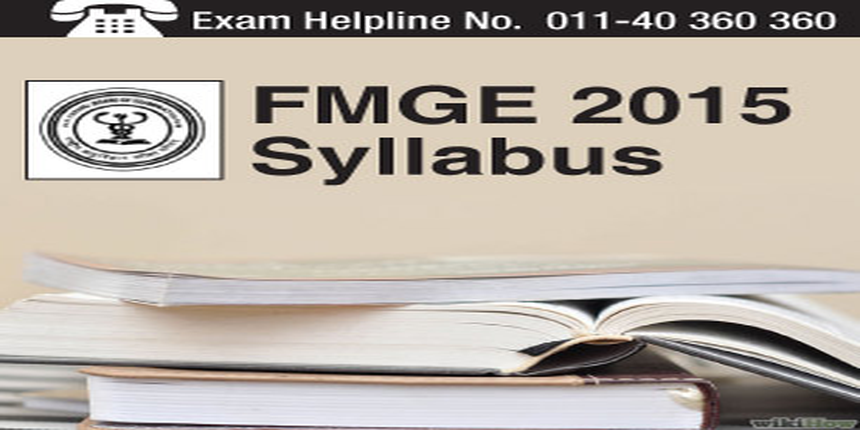 FMGE 2015 Syllabus gives an overview to candidates from which sections of pre-clinical, para-clinical and clinical sciences questions will be asked. The examination authority National Board of Examination (NBE) has released the FMGE 2015 syllabus for candidates appearing for the entrance test. FMGE syllabus for the test will comprise of subjects /knowledge areas as per the Graduate Medical Education Regulations issued by Medical Council of India with prior approval of Government of India.

Candidates can check and download FMGE 2015 syllabus from the table given below. As per FMGE 2015 exam pattern, the entrance exam will be conducted in an online mode i.e. computer based test. The online question booklet of FMGE 2015 will be as per the syllabus prescribed by Graduate Medical Education Regulations. There will be total of 300 Multiple Choice Questions in English language from the topic mentioned below. The exam will have two papers and it is compulsory for candidates to appear in both the paper. The total duration of the exam will be of 2 Hours & 15 Minutes (Including 15 minutes for tutorial).

FMGE commonly known as Foreign Medical Graduate Screening Exam is conducted by National Board of Examinations (NBE) two times a year in June and December sessions. FMGE 2015 is a screening exam for Indian citizen/Overseas citizen of India possessing a undergraduate medical qualification (equivalent to MBBS in India) awarded by any medical institution outside India who is willing to get provisional or permanent registration with the Medical Council of India or any State Medical Council. This year, FMGE 2015 December is scheduled to be conducted on December 9 and 10, 2015. The result of FMGE 2015 December is scheduled to be released on January 10, 2016.

Stay tuned to medicine.careers360.com for more news and feature related to FMGE 2015

FMGE Practice Test 2019 - NBE has provided the facility of FMGE 2019 practice test for the Decemb...

when the date of fmge , distribution passing certificate 2019 december from nat board

Hello,
According to the information by NBE, the FMGE results were declared on January 20,2020. The pass certificate tentative date of issue is February 2020.
If you have any other queries feel free to ask.
For more information on FMGE please check this link
https://medicine.careers360.com/articles/fmge-result
Hope this helps.
Read More
Answer
Answer Later
Report
6 Views

when the date of fmge passing distribution certificates

Hello,
The tentative date for release of FMGE certificates is February 2020 and the certificates will mostly be circulated by the end of February.
For more details check the link below:
https://medicine.careers360.com/articles/fmge-result
Hope this helps
Read More
Answer
Answer Later
Report
9 Views

when will the date fmge passing distribution certificate december2019 candidates

Hello,
NBE has said that the tentative date for distribution of the FMGE pass certificates is February 2020. So the certificates must be circulated by then end of the month.
For more information check the link
https://medicine.careers360.com/articles/fmge-result
Hope this helps
Read More
Answer
Answer Later
Report
10 Views

Hello,
If your college is recognised and your medical degree is recognised in India you can give the FMGE exam after you have finished your internship in China and have obtained your degree certificate.
After passing FMGE you have to do a compulsory one year internship in India after which you can practice or choose to give NEET PG.
Hope this helps.
All the best
Read More
Answer
Answer Later
Report
18 Views

I have completed my MBBS in China in Xiamen university in 2011. In 2013 I got married. In 2014 I cleared fmge and did internship in osmania hospital. After that I went to Qatar with my husband for 2 years. I got degree on Sept 2017. Next month Im flying to US withm eligible for applying usmle

Well I would like to tell you that after MBBS program ends a doctor can apply for USMLE exam . In USA once you are done with your studies, you are required to give USMLE exam which is organised in three levels and once you qualify all the three levels then you are allowed to get into residency program but finding one is really difficult. USMLE can not guarantee you residency rather it will only help you in allowing you to go search for residency in US hospitals. Same goes for international students as well but the level of difficulty is a lot and getting residency is the most difficult thing to do.

View All Questions
Have a question related to FMGE ?

Your FMGE brochure has been successfully mailed to your registered email id .