Fresh lease of life for NEET 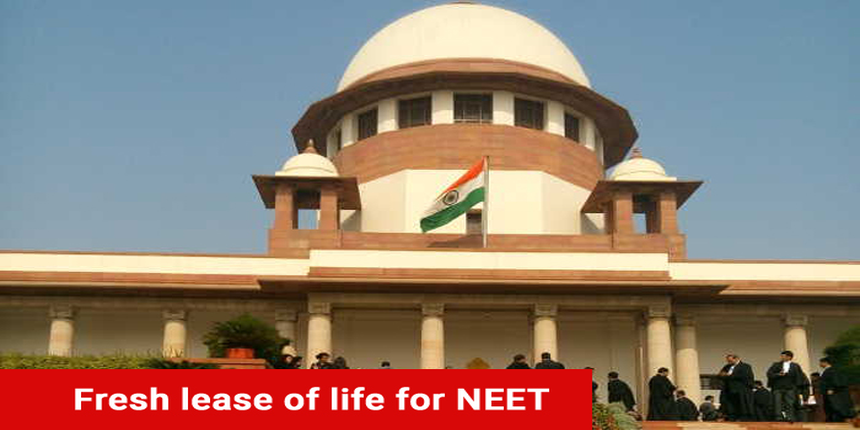 The Supreme Court of India has cleared the Medical Council of India (MCI) proposal for a common entrance examination for medical colleges across the country setting aside its previous order under which common entrance examination for MBBS, BDS and postgraduate courses were proscribed. In 2013 the apex court had put a ban on the National Eligibility-cum-Entrance Test (NEET), allowing private medical colleges and states to admit students through their own entrance exams.

Supreme Court on May 9, 2016 ruled that NEET 2016 Phase 2 exam scheduled to be conducted on July 24 can be appeared by all candidates irrespective of their appearance in AIPMT/NEET Phase 1 held on May 1. However, NEET phase 1 examinees who appear for NEET Phase 2 will lose the NEET Phase 1 score. The apex court also cancelled state level and private medical entrance exams, observing that there was no infirmity in the National Eligibility Entrance Test (NEET) regulation on the ground that it affects rights of states or the private institutions observing that observed. The court also ordered CBSE to conduct the NEET Phase 2 in vernacular languages. Read the full story here.

The Constitution Bench comprising Justices Anil R. Dave, A.K. Sikri, R.K. Agrawal, Adarsh Kumar Goel and R. Banumathi recalling the July 2013 order directed for fresh hearing of the matter. The court has now mandated that NEET be conducted for 2016-17 and government has accepted the same. The MCI has welcomed the move. Commenting on the SC judgment, Prof. C.V. Bhirmanandham, Vice-President of MCI said, “The SC verdict is a very positive move and we have been fighting for it. Merit will get priority now and the reservation policy of the central government would be followed. This would remove undeserving candidates from getting admitted to medical colleges.”

But the relief was short-lived. Within a few weeks of the first ever NEET in 22 cities some of the state governments and private medical and dental colleges challenged the move in the Supreme Court. In response, the court, in an interim order passed in December, permitted private colleges and states to conduct their medical entrance tests but directed them not to announce the results till further notice (an embargo that was lifted in May).

Large number of students took to streets against the move by private medical colleges to allegedly scuttle a transparent and merit-based ‘one nation, one test’ system of admission in states that were holding separate entrance tests.

In   2013, the MCI had passed a regulation seeking to introduce National Eligibility Entrance Test for medical seats. This move was opposed by several states governments and the matter went to the Supreme Court, which struck down the same. However, the MCI and the Centre sought a revision of the order.

This year the Union Ministry for Health and Family Welfare approved the Medical Council of India recommendation to amend the Indian Medical Council Act, 1956 to allow a single common medical entrance test for both undergraduate and postgraduate medical courses in all colleges across the country, including private colleges and deemed universities.

Justice Anil R. Dave observed, “A student, who is good at studies if he appears only in one examination conducted by a particular University in a particular State and if he fails there, he would not stand a chance to get medical education at any other place. The NEET will facilitate all students desirous of joining the medical profession because the students will have to appear only at one examination and on the basis of the result of the NEET, if he is found suitable, he would be in a position to get admission somewhere in the countryâ¦ If only one examination in the country is conducted and admissions are given on the basis of the result of the said examination, in my opinion, unscrupulous and money minded businessmen operating in the field of education would be constrained to stop their corrupt practices and it would help a lot, not only to the deserving students but also to the nation in bringing down the level of corruption.”

As per MCI, more than 90 entrance examinations are conducted annually for admission to MBBS courses for nearly 400 medical colleges in the country for around 50,000 seats. A common exam will definitely save students from the hassle of taking several tests conducted across the country.

Dr Ajay Gambhir, President, National Neonatology Forum of India said, “First of all I would like to congratulate IMA for pushing for NEET as the judgment that has come from the Supreme Court is very good. This is the right kind of attitude that one needs to have in order to succeed in the medical field.

It is also important to note that the recent judgment is student-friendly as they are the biggest stakeholders. A senior doctor at Vardhman Mahavir Medical College, Delhi on condition of anonymity said, “I am glad finally the justice has prevailed and the Supreme Court has realized the apathy of the students who are fleeced by private medical college owners for seats. Medical education has become a commercial venture. I am of the opinion that there should be no capitation fee at all in any of the medical colleges.”

“I pray that the Supreme Court delivers its final judgment on the fresh hearing in favour of the students and making NEET as the only mode of entry into MBBS and medical postgraduate courses. I repose full, faith in the institution of Supreme Court and pray that they take action to cut out black money in admissions into medical colleges,” another faculty added.

The judgment has been applauded across the circles and a majority view is that there are rampant irregularities in admission to the so-called ‘commercial’ medical colleges. They are already in the majority among medical colleges, and soon two out of three Indian medical colleges will be in the private sector. NEET, being an objective test of academic ability is expected to eliminate extraneous considerations.

Admission to all medical colleges should be strictly according to ranking in NEET. In case of state medical colleges or in minority institutions charging similar fees, weightage could be given for other considerations like reservations It is also expected that the authorities concerned would clarify the fate of exams already conducted.

Stay tuned to www.medicine.careers360.com for more news and featured articles on NEET 2016