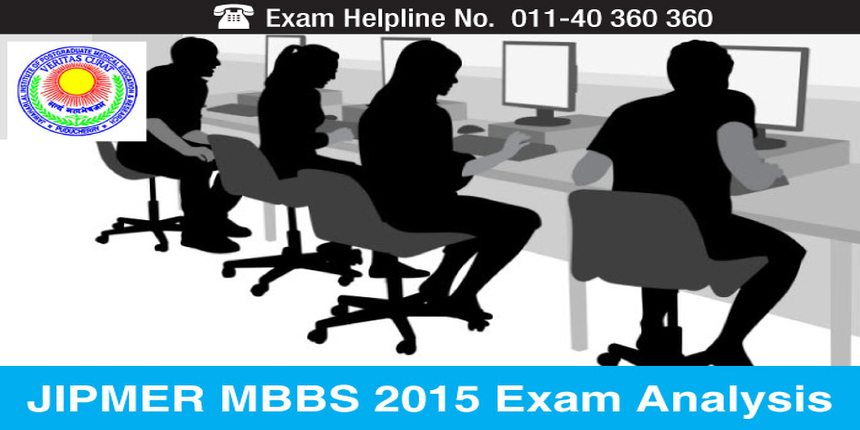 JIPMER MBBS 2015 Exam Analysis - JIPMER MBBS 2015 entrance exam for 150 MBBS seats conducted in online mode on June 7, 2015. According to officials, around 1, 37000 candidates who took JIPMER entrance exam 2015 at 581 centers located in 75 cities of India. According to students who appeared for the exam, the paper was of moderate to tough in terms of difficulty level. Most students found Physics being the toughest while some found English comprehension and logic and quantitative reasoning a tricky.

Drishti Singh who appeared for JIPMER MBBS 2015 from Greater Noida, Uttar Pradesh said that exam was of moderate in terms of difficulty level. “I found all section to be of moderate level, expect Physics and logic and quantitative reasoning. Among the all section Biology was easiest for me. The questions from Physics were complicated and most of the questions of logic and quantitative reasoning were tricky”, she said when asked to give feedback about the exam.

The exam was tough for Praveen Kumar, who appeared for the JIPMER MBBS 2015 entrance exam from Delhi. “The exam was tough for me. The toughest section for me was Physics, English comprehension and logic and quantitative reasoning. While the questions from Biology and Chemistry was easy. The question from Chemistry was direct and theory based”, he said.

The computer based JIPMER MBBS 2015 exam conducted successfully across the centers without reported any technical glitch as said by officials. Tanvi Suman, who took the exam from Mumbai, said she was nervous before the exam as she was giving first time computer based exam. “Navigation among the question palette was smooth and I was relaxed after going through the online question paper. Easy to navigate among the sections helps me to immediate switch the questions. Overall, I found Biology and English comprehension to be the easy as compared to Physics and logic and quantitative reasoning”, she explains.

JIPMER MBBS 2015 entrance exam paper had 200 questions from 5 different sections. Each section, Physics, Chemistry and Biology carried 60 questions and another section of English comprehension and logic and quantitative reasoning had 10 questions from each. One mark will be allotted for each correct answer and there will be no negative marking for wrong answer.

The result of JIPMER MBBS 2015 will be declared on or before June 15, 2015. The result will have candidates roll number, dtae of birth, total marks and marks obtained in Physics, Chemistry Biology (Zoology & Botany) and English.

Candidates can check the detail of JIPMER MBBS 2015 seats and reservation from the graph given below:

Stay tuned in to medicine.careers360.com for more news and articles on JIPMER MBBS 2015