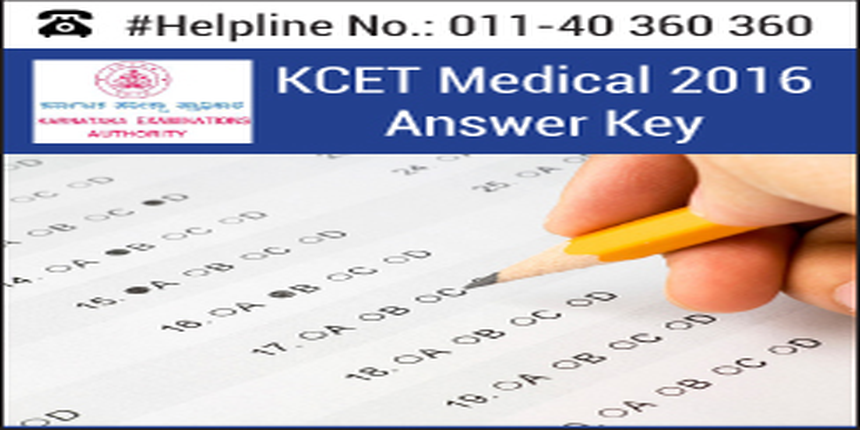 KCET Medical 2016 Answer Key - The examination authority, KEA has released KCET Medical Final Answer Key 2016 on May 28. Earlier, KCET Medical Provisional answer key 2016 has been released by examination authority on May 7, 2016. The KCET Medical 2016 answer key released by various coaching institutes can also be downloaded from this page. The exam conducting authority, KEA, has also released the question paper of the entrance exam, separately for each subject, Physics, Chemistry and Biology. Candidates can also download the question papers of KCET Medical 2016 so that they can match it with provisional KCET Medical answer key 2016 released by exam conducting body. The candidates / parents / lecturers can file their objections, if any, with justification through e - mail: keauthority-ka@nic.in (mail should be titled as CET-2016 - Objection - Subject Name) on or before May 10, 2016 before 5:30 pm. While submitting the objections the subject, version code and question number should clearly be mentioned. If no justification provided, such objections will not be considered for expert committee for review.

How to Calculate KCET Medical 2016 Score with the help of KCET answer key:

The following procedure will be applied to calculate KCET medical 2016 score.

Candidates can download KCET Medical 2016 Answer Key released by various medical coaching institutes from the table given below.

KCET Medical 2016 will continue to be gateway for admission to state medical colleges in the admission year 2016. The exam, which earlier stood cancelled as per the Supreme Court order on May 9, 2016, again comes into effect after the Centre brought an ordinance on NEET, which put state entrance tests out of NEET ambit for 2016 admission year. However, NEET phase 2, applicable for admissions to 15 per cent all India quota in government colleges; and private and deemed institutions, is still open for all.  Read important articles on NEET 2016 from the links given below.

Read important articles on NEET 2016 from the links given below:

Stay tuned to medicine.careers360.com for more news and feature related to KCET Medical 2016