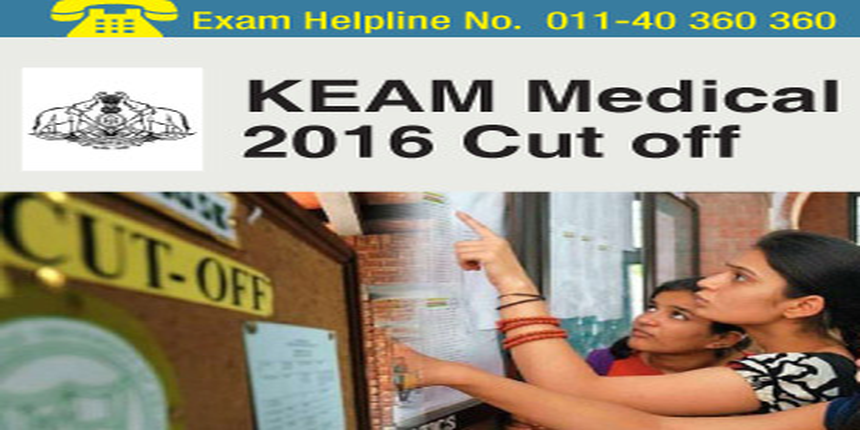 LATEST: KEAM Medical Result 2016 has been declared on June 1.

Candidates can check the KEAM Medical cut off marks mentioned below for the different categories as declared by the exam conducting authority:

Based on the cut off marks of KEAM Medical 2016, the exam conducting authority, i.e. Commissioner of Entrance Examination, Government of Kerala has prepared a combined merit list for all the qualified candidates. The allocation of undergraduate MBBS and BDS seats in KEAM Medical 2016 will be purely based on the merit list.

The result of KEAM Medical 2016 has been declared on June 1, 2016 admissions to around 1,895 MBBS seats and 840 BDS seats in Government, Government Controlled Self Financing and Private self-financing medical and dental colleges of Kerala.

KEAM Medical Cut off (Rank Wise): Candidates can check the closing rank of some popular medical colleges of Kerala based on the candidate’s preference who took admission in 2015 and 2014 academic year.

KEAM Dental Cut off (Rank Wise): Check below some of the popular BDS Colleges of Kerala based on the closing rank of candidate’s preferences who took admission in 2015 and 2014 academic year:

KEAM Medical 2016 will continue to be gateway for admission to state medical colleges in the admission year 2016. The exam, which earlier stood cancelled as per the Supreme Court order on May 9, 2016, again comes into effect after the Centre brought an ordinance on NEET, which put state entrance tests out of NEET ambit for 2016 admission year. However, NEET phase 2, applicable for admissions to 15 per cent all India quota in government colleges; and private and deemed institutions, is still open for all.  Read important articles on NEET 2016 from the links given below.

Read: All about NEET

Stay tuned to www.medicine.carers360.com for more information and latest updates on KEAM Medical 2016