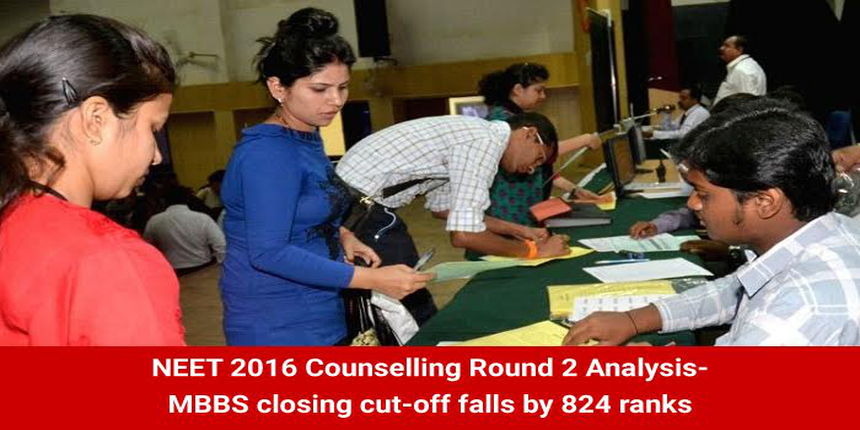 Even as the Kerala High Court has directed the Medical Counselling Committee (MCC) to conduct multiple counselling rounds until the All India Quota seats fill up, the committee has declared the seat allotment result after the second and final round of counselling, as per the previous Supreme Court directive ordering it to conduct only two NEET counselling rounds. The final round of counselling, which concluded on September 11, reflected a downfall in the MBBS cut-off rank for both General and OBC category by over 800 ranks compared to the previous year.

The graph below shows comparative analysis of NEET 2016 and AIPMT 2015 last cut off ranks for different categories:

Candidates can check below for the highlights of NEET 2016 final counselling round:

Create your own infographics

As per official data, the NEET counselling was held for as many as 3819 MBBS and BDS seats in 206 medical and dental colleges, for which a total of 19,325 candidates had qualified under 15% All India Quota seats.

Under the present norms, candidates can report at the medical and dental colleges against their second counselling round result by September 20, 2016, up to 5:00 pm. Thereafter, the vacant seats left due to non-joining and resignation will be transferred to respective states to be filled through State Quota. However, following a petition, the Kerala High Court has ordered MCC to fill all 3819 All India Quota seats so that no vacant seats are transferred to the States as candidates who have qualified for NEET Counselling and are eligible for admission will stand to lose out in that case. Read the full story here.

The MCC is yet to release a notification on the Kerala High Court’s order.

NEET 2016 counselling was held for as many as 3,819 MBBS and BDS seats in 206 medical and dental colleges. The first counselling round had begun on August 22, 2016, and the seat allotment result was declared on August 28. The second and final round of counselling had begun on September 9 and the seat allotment result was declared on September 12, 2016. It is for the first time that NEET Counselling was concluded in two rounds only, as per the Supreme Court’s order. Earlier, the court had ordered to complete the counselling in two rounds only so that the admission process can complete till September 30, 2016.

Stay tuned to www.medicine.careers360.com for more information on NEET 2016