NEET 2016 has come into effect now.Union Minister of Health and Family Welfare J P Nadda have detailed out different aspects of the NEET ordinance and its effect on the admission processes of UG and PG medical programmes in India. Careers360 brings here the key highlights of NEET 2016 ordinance which is named as ‘The Indian Medical Council (Amendment) Ordinance, 2016 and The Dentists (Amendment) Ordinance 2016’. 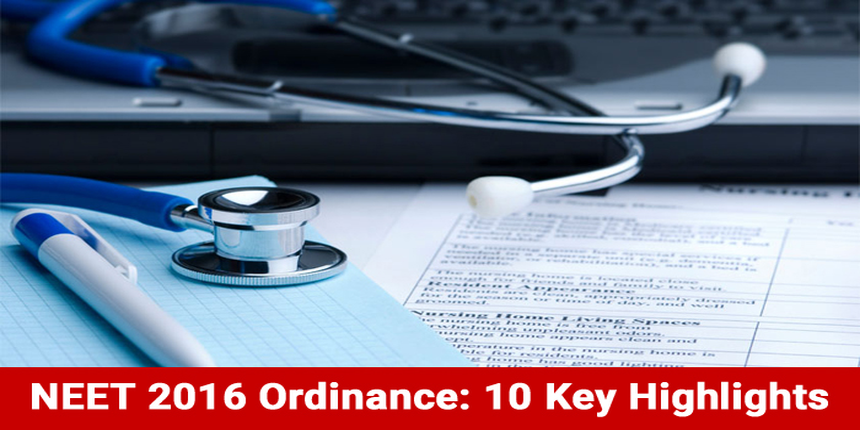 May 24, 2016: President Signs NEET ordinance; States can conduct their own entrance exams

President Pranab Mukherjee had signed the NEET ordinance on May 24, 2016, paving the way for state-level medical entrance tests for admissions in MBBS and BDS programmes in government colleges. Read the full story here.

President Pranab Mukherjee had sought clarity on NEET ordinance and its legal aspects before signing the special order cleared by union cabinet on May 20, 2016. Health Minister J P Nadda met the president and clarified Centre’s approach on deferring NEET by a year. Read the full story here.

May 20, 2016: Centre brings ordinance to postpone NEET for states by a year

The Centre had passed an ordinance to defer NEET 2016 by a year for state governments and their affiliated institutions for this academic year. The Union Cabinet on May 20, 2016 had passed a special order which overruled the Supreme Court’s judgment on NEET 2016. However, NEET 2016 would still be applicable for 15% All India quota seats and management quota seats in private and deemed institutions. Read the full story here.