NEET 2016 Phase 2 exam analysis- While the overhaul of the medical entrance exam system in the country has been shrouded in controversy, NEET 2016 Phase 2 exam allayed fears of many candidates as the paper turned out to be easy on them and strictly followed the NCERT syllabus.  Sunita, who did not appear for NEET 1, said following the NCERT syllabus eliminated any surprise in the test. “All this while I was in tenterhooks about the test. There was a new development almost everyday. When I consulted my teachers, they told me to follow NCERT, which paid off,” she said.  NEET 2016 Phase 2 is the second phase of the NEET test, which accommodated students who had previously either opted for state or private medical entrance tests and even those who were not confident about their NEET Phase 1 (Previously AIPMT 2016) test. 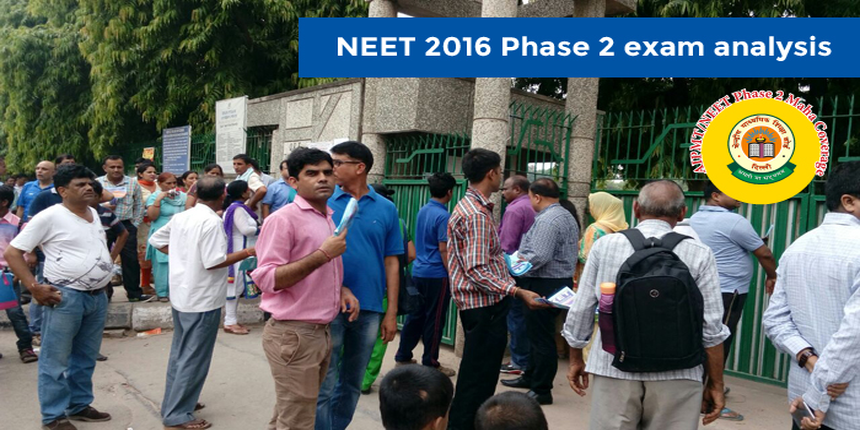 CBSE had to restructure AIPMT after the Supreme Court ordered for a single medical entrance test for admission to medical colleges across the country. While the court demanded state medical colleges to mandatorily participate in NEET from this year, an Ordinance by the Central Government (which has been since been passed as a Bill) ensured that States could opt to stay out of its ambit for the academic year 2016-17.

Physics came as a surprise for candidates as many of them found it to be on the easier side in NEET 2016 phase 2. “Physics has always been the toughest section. But this time’s paper was comparatively easier for me,” says Rohit who also appeared for NEET 2016 Phase 1. Another candidate, Vidushi, who appeared from a Delhi centre, said that 95% of the paper followed the NCERT syllabus. “Most of the questions were form NCERT, which was not the case in the previous paper. If one has prepared from NCERT, the test was not a tough nut to crack at all, especially, Physics, which makes most students nervous,” she said.

Chemistry, however, was a different case with many candidates finding it to be difficult, especially, the organic portion. “For me organic Chemistry was a bit tricky. I was expecting Chemistry to be easier,” says Shaan.

Biology did not disappoint, as like previous years this time too, it turned to be the easiest of all the sections. “I found Biology to be the easiest. I think I am going to get a good score in this section,” says Nishu who appeared only for NEET 2016 Phase 2.

Many students felt that the mere two months given to complete their preparation was unfair and could reflect in their score. “Some students have been preparing for this for years. I only got a few months. I think the order was implemented too fast. We were hardly considered in the process,” complained Anwesha, who was planning to appear for a private medical college entrance but had to divert her attention to NEET after the SC order. Another candidate Nikhil, said that the order might have taken away a back-up option from many students. “Earlier, you knew you had the option of preparing better for other tests if your AIPMT exam did not go well. As such students did not have to put all their efforts on one exam. Now, if I do not do well in NEET, I hardly have other options other than AIIMS or JIPMER, which are equally tough and competitive.”

Earlier, there were over 90 medical entrance tests in the country, which has now been reduced to just three- NEET, JIPMER and AIIMS. Of these, AIIMS and JIPMER are required for admission to only specific set of colleges under AIIMS and the Jawaharlal Institute of Postgraduate Medical Education and Research, respectively.

Even in the second phase of NEET 2016, the pattern of the test continues to be same. NEET 2016 phase 2 had a total of 180 multiple choice questions equally divided among Physics, Chemistry Zoology and Botany subjects carrying 720 marks in total.

Below is the pattern of AIPMT 2015

Stay tuned to www.medicine.careers360.com for more news and updates on NEET Phase II