NEET 2016 Topper Interview: Practice by taking as many mock tests as you can, says AIR 8 Dhritiman Chatterjee

Dhritiman Chatterjee from Kolkata, West Bengal, who has secured AIR 8 in NEET 2016, was always known for performing exceptionally well at his school. The topper has already taken admission at Jawaharlal Institute of Postgraduate Medical Education and Research (JIPMER). A student of Calcutta Boys' School, Dhritiman drew inspiration from his parents’ encouraging words. Though the movie buff could not get time to go to theatre for watching movies, still he managed to watch movies on his mobile phone. After hectic study hours, he often used to play gully cricket with friends to relax his mind. 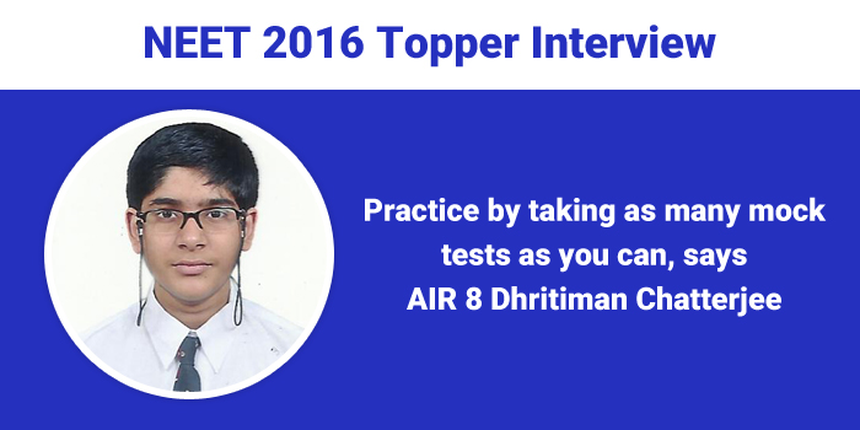 In this exclusive interview with Careers360, the aspiring surgeon shares his preparation strategy and tips to crack the coveted entrance test, for medical aspirants who will be appearing in NEET 2017.

Read the full interview below.

Click here to know everything about admission through NEET 2016.

Careers360: Congratulations on your outstanding performance in NEET 2016! Are you surprised?

Dhritiman: Thanks a lot. I was completely stunned. Actually, I was expecting to come under top 20 rankers, but I was speechless when I got to know that I am among the top 10.

Careers360:What are the key factors behind your spectacular success in NEET?

Dhritiman: Sincere efforts and continuous practice were the key efforts behind this victory. I used to solve mock/practice tests as many as possible. I made sure that I give my 100% when I sit down to study.

Careers360:What made you choose medicine as a career? From when did you start preparing for it?

Dhritiman: I chose medicine as my career as this is among the noble professions. I started preparing for it when I was in Class XI.

Careers360: Which field of medicine would you like to pursue your career in after MBBS?

Dhritiman: I have not decided it yet, but I have interest in pursuing Surgery as my career.

Careers360:Did you have any preparation strategy for NEET? Would you like to share some of the names of books you have studied from?

Careers360:Did you appear for NEET 1 or NEET 2, or both? According to you, how was the overall difficulty level of the exam? Which were the easiest and toughest subjects?

Dhritiman: I appeared in NEET phase 1, which was, overall, of moderate difficulty level. I found Physics the lengthiest section. Biology was the easiest part according to me, while questions asked in Chemistry were of average difficulty level.

Careers360:Do you think coaching is necessary to crack entrance exams like NEET?

Dhritiman: Yes, I think a student can perform exceptionally well if he/she has joined coaching classes. This way, they get expert guidance from teachers. This is not possible when you are doing self-studies. Also, you get a sense of competition as all your companions have the same goal of cracking the entrance exam with a good score. This positive pressure helps you in giving your best.

Careers360:Would you like to share a little about your family? How supportive were your family members in your preparation phase?

Dhritiman: I am only child of my parents. My father works in an IT company whereas my mother is a homemaker. They have always been very supportive. There was not any kind of pressure from them. They encouraged me a lot during my preparation phase and to give my best in the exam.

Careers360:This year, there has been lot of confusion surrounding AIPMT and NEET. Did the ongoing NEET row affect your preparation?

Dhritiman: To be honest, I was not that much affected by all that confusion and controversy. I had complete confidence in me and my preparation. I knew that I will be able to perform well in NEET.

Careers360: From next year onwards, only NEET will be held for UG medical admissions. What’s your take on that?

Dhritiman: This has advantage as well as disadvantage. The benefit is that students will be saved from the hassle of appearing in multiple entrance exams, while on the other hand, the drawback is that they will be given only once chance to prove their mettle. If a student is not able to perform well in NEET, then he/she will not be getting any other opportunity.

Careers360:What did you do to get stress-free after long hours of studies? Do you like movies? Which movies you like the most?

Dhritiman: To relieve my stress, I used to play cricket with friends or watch television. I enjoyed watching ‘House’, which is an American television series. I love Bengali movies, especially Satyajit Ray directed ‘Goopy Gyne Bagha Byne’. I did not get time to watch movies at theatres, so I used my mobile phone for that purpose. The last movie I watched was ‘Tamasha’, a Bollywood movie.

Careers360: Would you like to share any message for medical aspirants who will be appearing for the entrance exam next year?

Dhritiman: You should focus on solving maximum number of practice papers and mock tests. But before that, understand that time management is the most important ingredient of success. Proper planning and systematic study play a key role in cracking competitive examinations. Also, remember to keep calm during the test and give your best shot.

Stay tuned to www.medicine.careers360.com for more news and featured articles on NEET 2016.

NEET Exam Dates 2020 has been announced by NTA. Aspirants can ...

2 hours ago
Read More
View All News and Articles

In neet 2019, 562 marks was the lowest marks that was required for general  category for getting a seat in Government dental College,  under Rajasthan  state quota and it was for Govt. Dental College & Hospital(RUHS), Jaipur

You can check the same at
https://medicine.careers360.com/articles/neet-cutoff-rajasthan

But cut off marks  keeps changing every year depending upon various factors like number of students that appeared in the exam, kind of marks obtained by them , toughness level of the examination etc.

how much syllabus for neet 2021 academic year is reduced

The MHRD did inform that the syllabus for both JEE Mains and NEET will be reduced for the year 2021 as the Academic year has been reduced due to Corona pandemic. The MHRD has not yet officially announce the syllabus but has requested suggestions regarding the topics that can be reduced for the Academic year 2021. Now if you are enquiring about Board syllabus, there is no official information about it. And if you are preparing for appearing for NEET 2021, we would suggest you to stick to NCERT books for now instead of buying any book. Not atleast until NTA releases the official revised syllabus. Because no body knows what the reduced syllabus is. So instead of buying various books available in the market, you should stick to NCERT books and prepare from them regularly. Once the official syllabus has been announced, then you can start preparing accordingly and purchase books. But now will be too early.

Chemistry is divided into Inorganic, Physical and Organic chemistry. For inorganic chemistry, you must refer to the NCERT.Coordination points get 9% of weightage. Thermidynamics takes the 8% and Equilibrium takes the 6% weightage slots respectively. Chemical Bonding and Organic structure carries the 5% weightage slot and rest of the topics carry 2-3% weightage in the exam paper.Chemical Bonding, Molecular structure, Solutions, Block Elements, Alcholos, Phenols and Ehters. Aldehydes, Ketones and Carboxylic acids are important topics. Organic comprises of many reactions and reagents which can be practised by writing over and over again. Physical chemistry requires a comparatively deeper understanding of concepts, so preparing with the NCERT and referring to study material a level higher than NCERT should be the way to go. For more information, please visit our page at: https://medicine.careers360.com/articles/how-prepare-for-neet-chemistry . To help you with your NEET preparation, we have NEET Knockout packages that you can check at: https://learn.careers360.com/knockout-neet-may/ .

Is DC PANDAY book for neet 2021 is enough for Physics ? or whats your recommendation for good score in physics ?

DC panday is written such that not everyone likes it. Basically there are various famous books for physics out of which HC Verma, dc panday and bm sharma books are among most famous books. HC Verma is very easily written and thus for beginners this book is best. DC panday if you are comfortable with this book then almost every concept is given so good for jee. Try previous year and practice papers too.

which is best book for NEET/AIIMS in English??

The best books to prepare for NEET in English are NCERT's of Physics, Chemistry and Biology of class 11th and 12th. First of all, read NCERT thoroughly because many times it is seen that the questions directly come from NCERT only.

Then, you should refer:-