NEET 2017: How will the SC verdict on age limit impact aspirants?

The National Eligibility cum Entrance Test’s (NEET) 2017 journey has traversed a tumultuous path ever since the CBSE issued its controversial eligibility notification on January 31 this year. The notification, which introduced unexpected changes to the NEET 2017 rules including caps on the number of attempts and a new upper age limit of 25 years (30 years for reserved candidates) disqualified thousands of MBBS/BDS aspirants in one stroke. Following the removal on the number of attempts after massive protests across the country, students are now hopeful that the age limit ruling will also be scrapped. The matter is currently pending in the Supreme Court, with the final verdict expected to be pronounced on March 20. 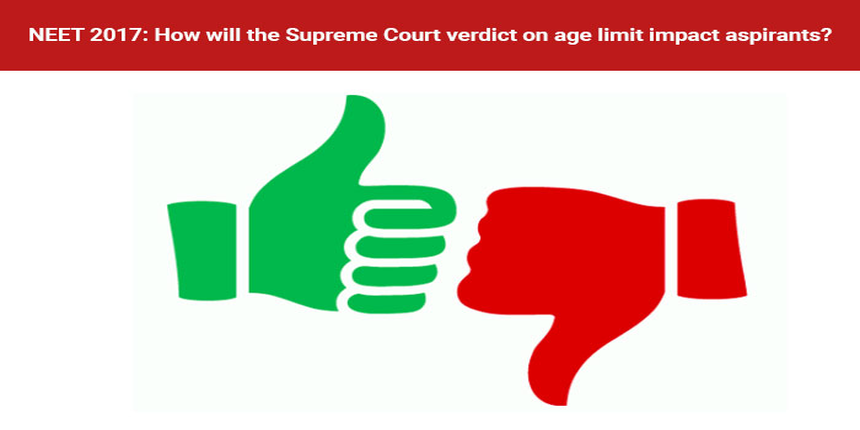 The Lucknow Bench of the Allahabad High Court is also currently hearing a similar petition challenging the introduction of the upper age limit in NEET 2017. The Allahabad High Court’s verdict, which was expected to be declared on February 28, has also now been adjourned to March 20 and will be released in accordance with the Supreme Court’s decision.

Given that the SC and the Allahabad HC have issued similar directives to the MCI to clarify how the NEET upper age limit criteria has been determined, and whether it has followed the correct procedure, the observations made by the High Court as well as the Apex Court will be useful to gauge in whose favour the final judgment may be.

Keeping the interests of students in mind, Careers360 provides a background of the case so far and also assesses the possible outcomes that may be realized once the Supreme Court’s verdict is declared.

If the MCI and the CBSE are able to persuade the Supreme Court in their final arguments that introducing the upper age limit is a good move, thousands of NEET UG applicants who have crossed the age of 25 (30 in the case of reserved categories) will not be able to write the exam nor be eligible for admissions to any medical college in the country.

The MCI’s arguments until now have attempted to reinforce its stance that upper age candidates could use unfair means to qualify for the exam. “Capping the upper age limit at 25 years gives a reasonable span of 8 years to a candidate to appear in NEET. The provision of absence of upper age limit is misused by unscrupulous elements, impersonators and candidates belonging to higher age groups (apparently doctors, teachers, coaching personal etc)...”, the MCI affidavit had stated. The MCI cited the case of age limits being present for other national level exams such as JEE (Advanced) for admissions to IITs and CLAT for National Law Schools, thus justifying its introduction in NEET.

The MCI also argued before the Supreme Court that age was a major factor in the practice of medicine and that “sharp young minds” were required to absorb the rigorous training imparted in MBBS and BDS courses.

In response to queries of the Supreme Court and the Allahabad High Court regarding the legitimacy of the new rules, the MCI in its response to the latter on February 23 stated that the Council’s Executive Committee had introduced the age limit via a resolution, and this had been subsequently passed by the Government of India, thus indicating a proper exercise of power which made the rule legitimate.

In response to the Supreme Court’s query as to whether there existed any provision for upper age limit in the existing NEET Acts or whether any such amendment had been lawfully introduced, the MCI replied that while such a provision did not exist in any of the Acts or Laws, it was in the process of being introduced.

If the Courts are convinced

On March 20, the Supreme Court will hear further arguments from the MCI’s side about how they intend to fix the age limit despite the absence of formal regulations to that effect so far. The Allahabad High Court is expected to pronounce its verdict in accordance with the SC’s decision on the same date. If the procedure is found satisfactory by the Court, along with the MCI’s argument that younger candidates will be at a disadvantage if there is no upper age cap, the age limit criteria for NEET 2017 will remain in force and students above the age of 25 (30 for SC/ST) will be disqualified from pursuing MBBS/BDS courses in the country.

By assessing the statements and observations made by the Supreme Court and the Allahabad High Court thus far, there remains a strong possibility that the NEET upper age limit criteria could be scrapped atleast for this year. The main contention of the petitioners at the Supreme Court and the Allahabad High Court is that the new criteria of upper age limit of 25 years is not supported by any appropriate regulation or procedure prescribed by the regulations framed under the Medical Council of India Act. As its introduction has not been in conformity with law, it deserves to be struck down, the petitioners argue.

Observations of the Allahabad HC

While the MCI had replied that the introduction of the rule had been as per the proper procedure, the Allahabad High Court had observed that the MCI’s arguments on introducing the upper age limit were not very convincing.

The Lucknow Bench of the Allahabad High Court, which was expected to give its verdict on February 27 in line with the Supreme Court's decision, has also adjourned its verdict to March 20. On Tuesday, February 28, the Allahabad High Court, after being informed about the Supreme Court's adjournment, stated, "It is...informed at the Bar that the matter was taken up yesterday and the Apex Court has been pleased to fix 20.3.2017 in the matter..Let the matters come up on 20.3.2017...In the event any orders are passed by the Apex Court, the same shall be brought to the notice of this Court as well."

Observations of the Supreme Court

The Supreme Court, while hearing the MCI’s response on February 27, queried as to whether there existed any provision for upper age limit in the existing Acts governing NEET or whether any such amendment had been appropriately introduced. The MCI replied to the Bench that while they did not have any such provision currently, they were in the process of introducing it. The MCI also informed the Court that it had introduced the upper age limit based on the CBSE’s guidance. In response, while adjourning the matter to March 20, the Court had remarked that the MCI and other respondents needed to show substantial reasons and evidences in favor of their decision in the next hearing. Given that the last date for NEET application submissions was March 1, the Supreme Court also stated that if at all the verdict were to be in favour of the petitioners, the CBSE would have to reopen its online application interface window for the candidates who could not apply earlier due to the upper age limit rule.

If the Supreme Court does pass its verdict in favor of the petitioners on March 20, all the candidates above the age of 25 who had applied to NEET 2017 would become eligible to appear for the exam. There might be a chance that this ruling will only be applicable for NEET 2017 only and the age limit might be reintroduced for NEET 2018. But atleast it will mean that the thousands of students who were denied at the last moment after preparing for NEET 2017 for so long will be able to appear for the exam this year and not have their time and efforts wasted.

UPDATE FROM SC ORDER: As per the SC order released on February 27, if the petitioners challenging the age limit succeed, the NEET application window will be reopened. However, relief will not be granted to any petitioner who hasn't approached the SC or HC before the NEET application form last date. "In case the petitioners succeed, the time for filling up the forms shall be extended. Needless to say, a person who has not approached either the High Court or this Court prior to expiry of the date cannot get the benefit of the order of this Court.", the order reads. It remains to be seen if the NEET 2017 age limit is removed on March 20, and if so, what the recourse for over-age candidates who did not or could not approach the Courts will be.