NEET 2018 Topper Interview: Being a Doctor is not a profession, it is a service for the society, says AIR 1 Kalpana Kumari 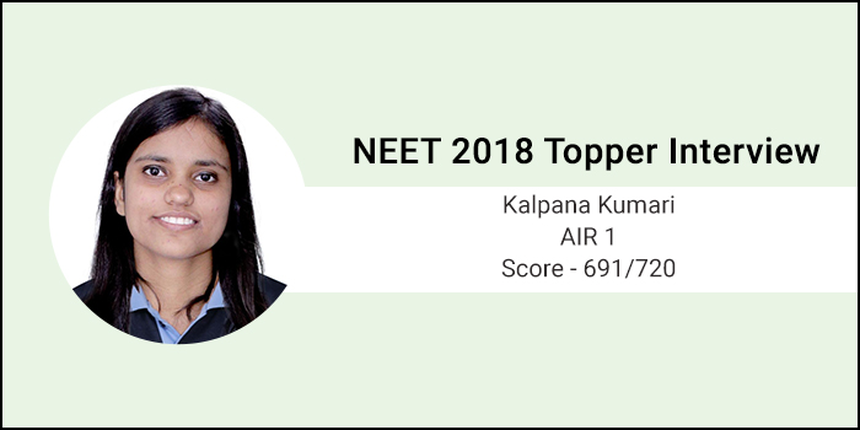 Following the guidance of her teachers, Kalpana believed in taking as many mock tests as possible to avoid repeating the mistakes. She wanted to be a doctor from a very early age and right now her aim is to pursue MBBS and then an MS in Cardiology. While Kalpana likes playing badminton, during her preparation days, she only concentrated on her studies. With her dream institution being AIIMS, New Delhi, her second preference will be Maulana Azad Medical College, New Delhi.

In this exclusive interview with Careers360 Kalpana shares details about her preparation strategy, the driving force behind her dream and other essential aspects which helped her ace the exam.

Prepare for NEET 2019 with concept and topic wise videos by exam experts. Get the complete course videos direct to your inbox. Click to Subscribe

Excerpts from the NEET 2018 Topper Interview.

Careers360: Congratulations on grabbing AIR 1 in NEET and topping the Bihar state board exam. How are you feeling and celebrating your NEET results?

Kalpana: Thank you for your wishes! It was not at all expected. I thought that I will make it to the top 5 but I never expected that I was going to secure AIR 1. After two days of the declaration of NEET result, I got to know that I have also topped the Bihar state board in Class 12 examination. I can't express it in words. It is just an amazing feeling and I am letting the feeling just seep in.

Careers360: Tell us something about yourself and your background?

Kalpana: My father is a lecturer at Mahatma Budha Teachers Training College, Sitamarhi and my mother is a teacher in my home district. My brother is studying at IIT, Guwahati and my sister studied at NIT and now she is serving in the defence services. My parents and siblings were always there to give me moral support and each of them had been a great example for me to look up to and achieve my goal.

Kalpana: I wanted to become a doctor since I was a child. There are a lot of people in the country who cannot even afford medical treatment. This motivated me to become a doctor and for me, it is not just a profession but a service for the society. My family always supported me even if I didn’t perform well in exams.

Careers360: What is your overall and subject-wise score in NEET 2018?

Kalpana: I have appeared for AIIMS and JIPMER. JIPMER was okay but I don’t think AIIMS went that well as the paper was very lengthy. I didn’t realise the time in NEET but for AIIMS I feel I needed more time.

Careers360: How did you prepare for NEET 2018 and balanced the studies for boards exam and other medical entrances with NEET?

Kalpana: I used to follow Aakash study material, teachers’ notes and that’s it. I was living in Bihar but I have been travelling back and forth from Sheohar to Delhi in these past two years. Whenever I had a doubt, I used to come to Delhi and consulted my teachers at Aakash. I never faced a problem in balancing my studies because I believe we kids don’t have much to do apart from studies. Therefore, I made sure that I study 12-13 hours a day at least. I knew my hard work will help me in overcoming failures.

Careers360: Which according to you was the toughest and easiest section?

Kalpana: I won’t say tough but Physics was lengthy so I tried to give more time to this section especially to chapters like Rotation. In Chemistry, I focused more on the Organic section, on the other hand, I never faced a difficulty in Biology but you need to give equal time to this section as well since it carries 360 marks.

Kalpana: I was never into anything in particular apart from studies. The only social media website that I have used was to video call my parents. I like playing Badminton but during my preparation days, I didn’t play it.

Kalpana: I believe all the credit goes to my parents and family. They have been there with me in each step of my life and never allowed me to doubt myself.

Careers360: Any college you have in mind for admission?

Kalpana: My dream institution is AIIMS, New Delhi, but I am not sure about the AIIMS entrance exam results. With NEET, I would like to join Maulana Azad Medical College, New Delhi.

Kalpana: My goal was to score well in NEET. So, I never decided what to do after that besides taking admission in a good college. Although, I believe I will choose MS in Cardiology.

Kalpana: Work hard as much as you can with full dedication and never lose hope.

Sorry sir but you cannot update it through your 10th marksheet.You may give any address proof document of your father for updation, like his aadhar card or ration card , driving license, voter id card ,passport, or any other government stamped document

Yes electronic aadhar or e aadhar is acceptable and you can use it without any hesitation ,hard of e aadhar , just go and print your e aadhar not the masked one ,print that one in which all the details are given ,e aadhar is fully valid everywhere BEST OF LUCK.

Im a college student I want to earn money online for my project, educational purposes by making power point presentation,slides, pdf of educational notes. as I am experienced in neet,jee fields is there any website provides such income?

Yes you can go for campus ambassador programs like in this careers360 they offer amazon voucher and cash prizes , you can search for interships on intershala.com.,You can serve as free lancer on lancer slwebsite, they you will be different projects like eding writing making presentation and other projects of your choice, freelancer.com

NEET exam expected cut off in 2020 for OBC

For being eligible for NEET as a Candidate belonging to OBC Category, you should secure a minimum of 40 percentile of the top NEET score. That is the cut off formula. Now the formula remains the same while the marks change. Cut offs change every year depending on various factors such as no.of Candidates appearing for the exam, no.of Candidates qualified, top NEET score and difficulty of the exam. In 2019, the cut off for OBC Category was 107-133 which was 15 marks greater than those of 2018. Now again as mentioned. cut offs change every year and so you should aim for securing atleast 150 to be qualified in NEET. But this is not enough for you to secure a seat. So you have to secure atleast 550 and above for a seat in Goverment Medical College and atleast 450 for a seat in a Private Medical College. This is just an approximate but yes your target should be nothing less than 550. Because in few States like Bihar, Delhi, UP,etc the cut offs are way higher than in other States like Tamilnadu, Gujarat, etc. So even if you do not belong to any one of these States but for securing a seat under All India Counselling in any one of these States, you will need more than 550. To help you with your NEET preparation, we have NEET Knockout packages that you can check at: https://learn.careers360.com/knockout-neet-may/. To help you during admission and counselling, we have https://www.careers360.com/mbbs-companion.

If covid 19 cases increases the NTA again postpone the neet exam after September 13 ?

Only 2 days back, The MHRD has come up with a new schedule for JEE Mains, JEE Advanced and NEET 2020. JEE Main examination will be held between 1st-6th Sept, JEE advanced exam will be held on 27th Sept & NEET examination will be held on 13th Sept. At this point in time, this is the information we have. And it is important to take things as they happen because we cannot predict the futire and this Pandemic is not something that we wish happens because lives are at stake. So for now, lets stick to the current schedule and hope for the best. And if you are preparing for NEET, you should try our NEET Knockout package: https://learn.careers360.com/knockout-neet-may/ . And NEET and JEE Mains might not be postponed further because the Government is making arrangements for the Vaccine to be introduced on August 15th.