NEET 2018 Topper Interview: I focussed on NCERT text books as the base for preparation, says Ritwik Kumar Sahoo, AIR 13

NEET 2018 Topper Interview - Ritwik Kumar Sahoo is not only basking in the glory of being the topper of NEET 2018 with an All India Rank of 13, but also in finishing as the state topper from West Bengal. Hailing from Tamluk, West Bengal, he enrolled himself in the distance coaching mode from both Allen Kota and Aakash Institute. Ritwik, whose dream is to become a Cardiac Surgeon, concentrated more on the NCERT textbooks as they form the base for NEET preperations.
Related Post -
NEET 2019
NEET Eligibility Criteria 2019
NEET Application Form 2019
NEET Admit Card 2019 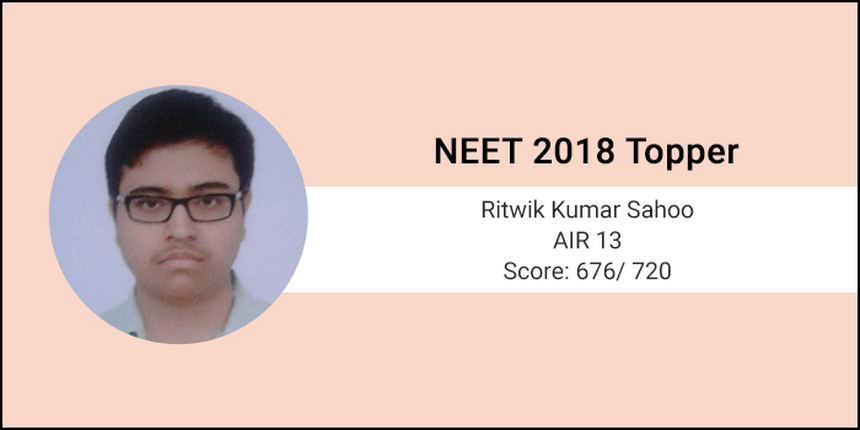 In this NEET 2018 topper interview with Careers360, Ritwik talks about his preparation strategy and the factors which motivated him to study and achieve AIR 13 in NEET 2018. A fan of cricket and literature, he managed to eke out time to follow his hobbies during the preparation phase. Maulana Azad Medical College, New Delhi and Calcutta Medical College are his dream institutes.

Excerpts from the Interview -

Careers360: Congratulations on making it to the top 20 list. How are you feeling about your NEET results?

Ritwik: Thank you! I am very happy with the results. I believe my hard work has paid off.

Careers360: Tell us something about your schooling and family background.

Ritwik: I did my schooling from Tamluk Hamilton High School, East Midnapore, West Bengal. My father is a teacher and my mother is a home maker.

Ritwik: I have always dreamt of becoming a doctor which also proved to be my motivation to crack NEET.

Ritwik: My mother was my biggest support system. She supported me whenever I needed her. Also, my teachers played a very important role in giving me the advise and confidence I needed.

Careers360: What is your overall and subject-wise score in NEET 2018?

Ritwik: Apart from NEET I also appeared for AIIMS and JIPMER. (Ritwik has obtained AIR Rank 32 in the JIPMER MBBS Result declared on June 8, 2018)

Careers360: How did you prepare for NEET 2018 and balance the studies for Board exams and other medical entrances with NEET?

Ritwik: I strictly followed the NCERT textbooks. Along with these, I made it a point to solve as many objective questions as possible. I took up online tests as well from Allen Kota and enrolled for the Distance Learning Programme (DLP) from Aakash Institute.

Careers360: Tell us about your NEET preparation routine?

Ritwik: I revised the NCERT texts thoroughly, solved a lot of objective questions and studied the notes provided to me.

Careers360: How much time did you devote in self-study vs coaching?

Ritwik: I spent around seven to eight hours daily as part of self-study. In the last few days before the exam, I spent upto 12 hours in self study. Overall, I tried to concentrate more on self study over coaching.

Careers360: What was your exam day strategy for all three subjects, namely Physics, Chemistry and Biology and how did you tackle your strengths and weaknesses?

Ritwik: Since Chemistry was my strong point, I concentrated more on completing Biology as much as I could and made sure to attempt as many questions as possible from Physics as it was my weak area.

Ritwik: I am a sports person. I love cricket and also take out time to read whenever I can. During the exams however, I concentrated more on my studies and spent less time on sports and reading.

Ritwik: From the beginning itself I had a clear goal and I made it a point to concentrate 100 percent on it. I took up the NCERT texts as my guide which led me through the examination preparation phase.

Careers360: Any college you have in mind for admission?

Ritwik: Yes, I will either look at MAMC, New Delhi, or Calcutta Medical College, Kolkata.

Ritwik: In the next ten years, I see myself preparing for my MS. I want to be a Cardiac Surgeon.

Ritwik: Concentrate on your goal from the very beginning. Thoroughly go through the NCERT texts which form the base for everything. Try your maximum to solve as many questions as possible, take up online tests and mock tests. Also follow the models from your coaching institute as they will guide you to your success.

How to complete NEET 2020 syllabus on time?

NEET 2020: Mistakes you must avoid on the exam day

Uttarakhand MBBS admission 2020 will be released in the last w...

Will NEET 2020 be difficult after merger of AIIMS and JIPMER- ...

is there any chance to postpone the neet exam ??

The HRD minister Ramesh Pokhriyal Nishank conducted a webinar on 5th May at 12 noon, and announced neet examination date on 26th July

So Your NEET examination is going  to be conducted on 26th July .

Inorganic Upto ncert level is it enough for neet ? I am little worried about it!

Hello student student NCERT book is good for inorganic chemistry its recommended by most of the teachers but as number of questions are very less in ncert its preferable to do one more practice book along with NCERT. Make sure you do each and every example and exercise questions of Ncert before jumping to a reference book after completing ncert thoroughly refer to your coaching material or any reference book as mentioned below :-

For more updates refer to the link mentioned below - https://www.google.com/amp/s/medicine.careers360.com/articles/best-books-for-neet/amp

Feel free to comment if you have any doubt

how to concentrate in studies for neet 2020

1. Check out the syllabus and structure your preparation, made a plan on how you're going to cover the syllabus.

The best thing to help you in this is coaching material from some good institute. They have their material prepared according to the need of the Exam.

2. When the plan is ready,make a schedule. Remember timetable matters a lot for this one year. Be ready to give at least 6 hours per day for the preparation.

5. Also keep on revising the stuff every third week. It is also a very crucial step in your preparation.

Here are few links for you:-

can i crack neet in one and half a month

1.Time Management – Daily Routine :- you should take care of the time. Make a chart for your daily routine and give maximum time atleast 14 hours to your study.

2.Having Good Food and Drinking More Water Will Help

3. Doing Meditation For 30 Min Per Will Increase Memory Power: Meditation will help you to focus on your study.

4. Take A Nap & Sleep Well: You should take a proper nap in between long time study.

5. Challenge Yourself: You have to challenge yourself to get better score in future. Increase your performance day by day and this will only happen when you will regularly study.

6. Find Your Weakness: You should practice the mock test and try to find your weakness and work on it.

7.Plan Your Study : You should prepare timetable and follow the proper time table so that will help you manage your time as well as attain the target.

8. Solving Sample Papers And Previous Years Papers: Sample Papers give you the idea about the type of questions that you will get in the exams and also it would really boast up your confidence and make you write the exam in a better way.

NCERT is must. Go through the NCERT to clear understanding of your topics

Hope this will help you!

In the last 1 and half months follow the given below strategy for Neet examination:-

Will NEET 2020 be postponed again?