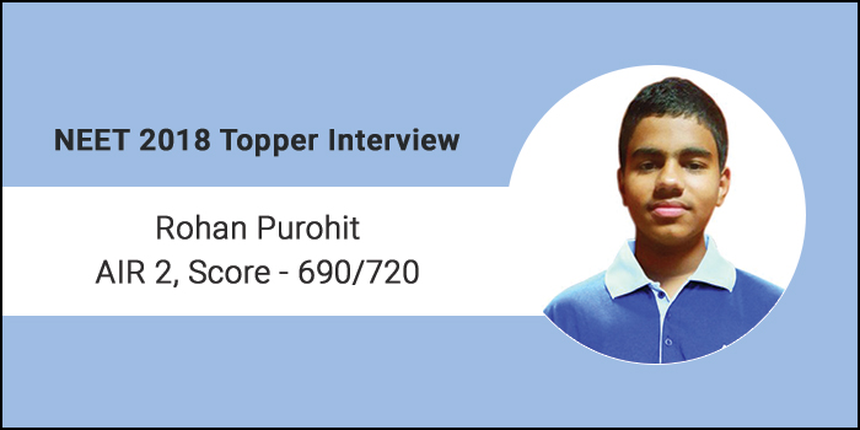 Born to doctor parents, Rohan says they were his main inspiration when it came to choosing a career. Intrigued by the functioning of the human brain and its enormous capabilities, he intends to take up an MS in Neurosurgery. An ardent music lover, Rohan used to destress from his packed preparation schedule by listening to his favorite songs and playing the keyboard on occasion. Careers360 brings to you an interview with Rohan Purohit, where he shares details about his preparation strategy for NEET 2018 and the essential aspects that contributed to his success.

Careers360: Congratulations on obtaining the second rank! How are you feeling about your NEET results?

Rohan: Thank you for your heartfelt wishes! Being in the top two in the country is making me feel ecstatic. I had calculated my score from the NEET official answer key but I was not sure as to what rank I might get. I believe all the hard work that I had put in has finally paid off.

Rohan: I was born in Bhubaneswar and later moved to Hyderabad. My father is a senior cardiologist, heading the department at Continental Hospital in Hyderabad while my mother is a Dermatologist working with the Apollo Group of Hospitals in the same city.

Rohan: As a child, I would always look up to my parents and the noble work that they put in. The sheer feeling of gratitude and respect that is attributed to a doctor is something that inspired and motivated me to become one.

Rohan: My family was initially apprehensive when I told them that I aspire to become a doctor. They cautioned me regarding the amount of hard work that I would have to put in. Once they realised how determined I was to pursue my dream, they have been nothing but supportive and kept my confidence boosted even at times when I felt really low.

Careers360: What is your overall and subject-wise score in NEET result 2018?

Rohan: I have appeared for AIIMS and JIPMER as well and am eagerly waiting for the results (Rohan has obtained AIR Rank 29 in the JIPMER MBBS Result declared on June 8, 2018).

Careers360: How did you prepare for NEET 2018 and balance the studies for boards exam and other medical entrances with NEET?

Rohan: I enrolled in Sri Chaitanya School, Telangana, which is a State Board school, in Class 11. My teachers at school helped us prepare simultaneously for both the Class 12 boards and the entrance examinations, with more focus being on the latter. It was this that helped me perform well in my board exams as well and obtain 980 out of 1000.

Rohan: For my NEET preparation, I used to plan in advance as to how much time I was going to devote to each topic judging by its difficulty. I made sure that I stuck to my routine as much as possible and it proved to be very fruitful. I devoted as much as 16 hours, right from 6.30 AM to 10.30 PM at my institute. The time was divided between my classes at school and self-study.

Careers360: Did you take any coaching? How beneficial did it prove?

Rohan: Yes, I did enroll for the Distance Learning Programme of Allen Kota. It proved very beneficial as I took a lot of tests and solved questions on a regular basis.

Rohan: On the exam day, my parents calmed me down and asked me to give my best without worrying about the results. During the exam, I attempted Biology initially and after solving half of it moved on to Chemistry since I felt that there were some portions of Biology I was unable to recall at that moment. Having solved the Chemistry portion, my confidence was boosted, so then I moved on to Physics and completed the remaining questions at the end.

Rohan: I found Biology slightly tougher than the rest.

Rohan: Initially when I started my NEET preparation, Chemistry was the toughest for me, Organic Chemistry in particular. Organic Chemistry being an applicative concept, my teachers asked me to solve as many problems in order to solidify my concepts.

Rohan: I like playing the keyboard. However, my strenuous routine did not allow much time to indulge in it. During my preparation days, I mainly listened to music which helped me to maintain my calm.

Rohan: I would like to think that both my mentors and my parents had an equal contribution to it. This would not have been possible otherwise.

Careers360: Do you have any particular college in mind for admission?

Rohan: In the next 10 years, I envision myself practising as a Neurosurgeon which is the field I want to pursue after completing MBBS.

Rohan: Be hard working and committed towards your goal. Never cease to follow your passion.

NEET 2020: Mistakes you must avoid on the exam day

Uttarakhand MBBS admission 2020 will be released in the last w...

Will NEET 2020 be difficult after merger of AIIMS and JIPMER- ...

Aspirants seeking information regarding the total marks of NEE...

Punjab MBBS counselling 2020 will be conducted by BFUHS. Read ...

If I get 500+ marks in neet exam, will i get Seat in private college in Karnataka and what will be the fees?

In 2020 cut off may increase or decrease depending on number of candidates appeared, difficulty of exam etc.Now fee is different for each college, in Kasturba College the fee is 64,35,000 while in MS Ramaiah Medical College the is 4,94,100 for entire duration of course.You can check the fee structure here for each and every college https://medicine.careers360.com/colleges/list-of-private-medical-colleges-in-karnataka

Can i get into any private mbbs college with neet score of 150. For st category

Actually  cut off marks for medical colleges  keeps changing every year depending upon various factors like number of students that appeared in the exam, kind of marks obtained by them , toughness level of the examination etc.

For example,
Last year in Karnataka 410 marks was the lowest marks for St category for getting a government quota seat in private medical college for MBBS and it was for Shridevi Institute of Medical Sciences and Research Hospital, Tumkur

So, you need to get at least 450 marks in NEET 2020 even if you want to get into private medical colleges for Government quota seats

i have not registered for neet exam still now.. so can i also give exam now online and i am with disability.. and which college is best for me i want to do bsc nursing and given my 12 class exams this year only and result has not come yet.. pls show me the way what should I do??

You cannot appear in NEET exam if you have not submitted the online application on or before last date successfully.You cannout appear in this year as you have not applied but if you are willing to appear next year you can apply for it provided you must fulfill the eligibility criteria.Now, you have not mentioned your state but there are colleges offering B.Sc nursing and it depends on your interest and financial ability to join in a college.Here is the list of colleges offering B.Sc Nursing which you may consider to get admission

The eligibility is that a candidate must have passed 10+2 with Biology, Physics and Chemistry.You need to score minimum percentage as specified by the college.

you are eligible if you have more than 50 percent aggregate in PCB category irrespective of the grace marks , and to get admission in MBBS you are required to crack NEET

where should I apply for AFMC MBBS 2020?????? please explain breifly

Admission to Armed Forced Medical Colleges for MBBS is done on the basis of marks obtained in Neet, as NEET is the only entrance examination for medical in India. After result out, you need to apply for AFMC through online application. AFMC will release merit list. On the basis of merit list, AFMC will conduct screening test for admission. There are various requirements for admission to AFMC, check here-
http://medicine.careers360.com/articles/afmc-mbbs
Read More
Answer

Will NEET 2020 be postponed again?