NEET 2018 Toppers - With NEET 2018 result declared on June 4, Careers360 presents here profiles of the toppers, who will be now pursuing MBBS and BDS courses from the best medical and dental institutions. Kalpana Kumari has bagged All India Rank 1 in NEET with total marks of 691.

Over 13 lakh aspirants appeared for the national level entrance exam across as many as 136 cities on May 6 for admission to over 90,000 MBBS and BDS seats. Out of these, a total of 7,14,562 candidates have qualified for counselling after the NEET result announcement. 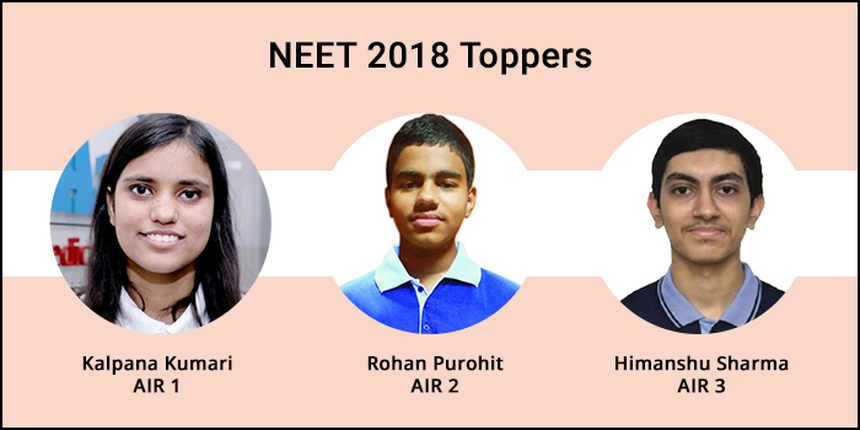 Have a look at the profiles, journeys and success stories of the toppers of NEET. Read the article below to know about their preparation strategies, hobbies, family background, and more.

Preparation tips- Coaching classes proved to be very helpful. I solved a lot of sample tests that were based on the same pattern as that of the actual NEET question paper. This helped me in gaining confidence to a great extent.

Family background- His mother is a dermatologist and father is a consultant and senior cardiologist.

What he has to say- I am very much inspired by my father who is a senior cardiologist. I began preparing for the competitive exams from class 8.

Future plans- He wants to become a neurologist.

Family background- Both his parents are teachers.

Preparation tips- I used to devote 7-8 hours daily for self-studies, and on weekends, I extended this time to 8-10 hours. During the preparation phase, I put more focus on understanding the concepts and clearing doubts whenever required. Also, I solved sample tests that comprised similar kind of questions as asked in NEET.

Gives credit to- Parents and mentors

Preparation tips- Physics is my favourite subject, followed by Chemistry. During the preparation phase, I didn't lose focus, and rigorously studied in order to crack the exam. I solved a lot of mock tests for better understanding.
Click here to read complete interview.

Family background- Father is medical store owner and mother is a homemaker.

Preparation Strategy- He used to study for at least six hours daily after the classes in school and coaching centre. Preparation and revision of notes helped him a lot.

What he has to say- I was expecting a better AIR in NEET but a wrong answer to a question reduced my score and rank.

What inspired him- Death of his grandfather due to a blood clot in brain inspired him to work hard, and crack this exam. Also, the summer program at Johns Hopkins University (American private research university) motivated him to achieve his ultimate goal.

Future plans- He wants to do MBBS from AIIMS Delhi or JIPMER Pondicherry. He eventually aims to be a neurosurgeon. He also wants to take up medical journalism as a hobby.

Family background- Both his parents are doctors.

What he has to say- Apart from taking coaching classes, I used to study for 7-8 hours daily.

Success mantra- Friendly competition helped the topper from Andhra Pradesh a lot. He and his three friends were in constant competition, and this motivated him to crack the entrance exam.

Preparation Strategy- He used to solve previous year and fresh questions that were provided by the coaching centre.

What he has to say- I want to give credit of my success to parents and teachers of the coaching centre.

Academic achievement- Bagged the first position in the district with 97.6 percent marks

Preparation tips- My coaching classes proved to be very helpful for me. I used to get highly informative study package there. I made sure that all my doubts get cleared. I put hard work, and took no tension at all. My only focus was on to crack NEET.

What she has to say- I give credit of my success to my parents, brother, and teachers.

As per the official information released by CBSE, the maximum number of students among the top 50 toppers are from Delhi. As many as eight candidates are from Delhi followed by Gujarat (7), Andhra Pradesh (5), and Rajasthan and Uttar Pradesh (4 each). Moreover, male toppers have outnumbered the female toppers by a vast margin. Top 50 NEET toppers include a total of 36 male candidates, while the remaining 14 are females.

Details of the top 50 candidates are as follows: