NEET 2019 Topper Interview - National Eligibility cum Entrance Test (NEET) was conducted on May 5 by the National Testing Agency (NTA) for admission into BDS/MBBS courses. The NEET results were declared on June 5. Delhi boy, Hardik Gupta bagged AIR 22 in NEET 2019 with a total score of 690 out of 720. He aspires to become a super specialist and believes that his determination and the constant support from his family helped him being a topper of NEET 2019. Hardik didn’t take coaching and consider that NCERT books were enough to crack the most sought-after medical entrance exam. Hardik yearns to get a seat in AIIMS Delhi. In an exclusive NEET 2019 topper Interview with Careers360, he shares how self-study helped him achieve this success. 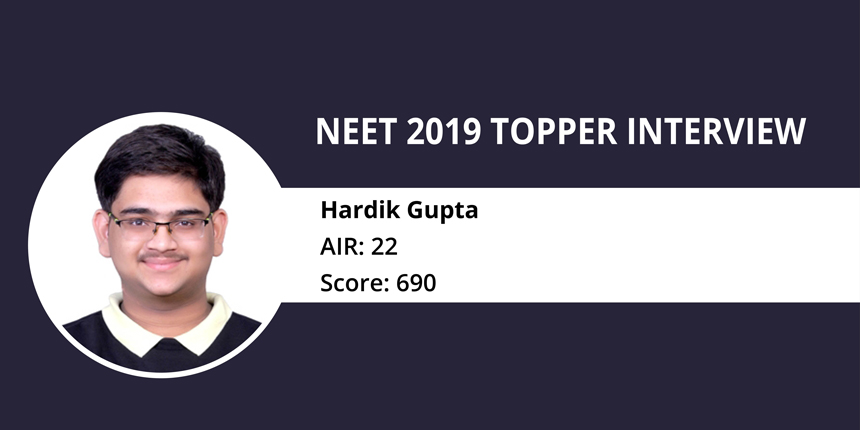 NEET is also a gateway for admission to AYUSH and veterinary courses. Candidates who aspires to pursue MBBS/BDS abroad must qualify in the entrance examination by securing the minimum cutoff percentile.

Hardik Gupta: Thank you so much. I am very happy. Scoring 22nd rank is a good feeling.

Careers360: Was this your first attempt?

Hardik Gupta: Yes, this was my first attempt.

Hardik Gupta: Till 10th I did my schooling from Delhi Public School and later I shifted to Navjeevan Adarsh Public School. My parents are doctors. Since childhood, I was determined to become a doctor. Moreover, I was more inclined towards Biology as a subject that oriented me towards the medical line.

Hardik Gupta: Since Biology was my favorite subject and for me to be a doctor is a feeling of satisfaction, these two factors motivated me to pursue medicine as a career.

Hardik Gupta: My parents have been always supporting me. Without them, no work or success would have been possible.

Hardik Gupta: Other medical entrance that I have appeared for is AIIMS, for which the result is to be announced by June 12. In the AIIMS exam, I have attempted 188 questions and I am not sure about the score as answer keys have not been released yet. Therefore, it’s difficult to make an estimation.

Hardik Gupta: The concepts of both exams were similar. For NEET, I prepared through NCERT books for two years. The only thing that changes is the answer formation. However, the rest remained the same. Only subjects that were different were English and Physical Education.

Hardik Gupta: I never had a fixed routine. Sometimes I used to wake up at 5 in the morning and used to give 5-6 hours in school and then 5-6 hours in self-study. According to me, the time has to be balanced by having a good sleep for 7-8 hours. I used to divide my time according to my preference. I used to study whenever I felt comfortable.

Hardik Gupta: No I did not take any coaching. I did complete self-study for 5-6 hours a day. All questions appeared from the NCERT textbook. The paper was very simple it didn’t require any coaching. At times, solving guide books helped me.

Careers360: What was your preparation strategy for all three subjects, namely Physics, Chemistry, and Biology?

Hardik Gupta: For Biology, I used to maintain a diary in which I noted all the important points and used to revise them before the exam. For Chemistry, I studied the reaction mechanism in Organic, as I believe once you understand reactions organic it becomes easy to attempt. Lastly, for Physics I made my concept more strong by solving NCERT examples and HC Verma. However, for all three I used to make notes of whatever I used to study and it helped me allot in revision.

Careers360: Which according to you was the toughest and easiest section?

Hardik Gupta: According to me, all the sections were easy. Though I scored less in Biology, still it was easy.

Hardik Gupta: My hobbies are painting, reading novels and watching cricket. Though during the preparations, I was not unable to devote my time to my hobbies.

Hardik Gupta: I would dedicate my success to my parents and grandparents who supported me throughout my life.

Hardik Gupta: In the next 10 years I see myself engaged in the super specialty branch or maybe in research work.