NEET 2019 topper interview: Coming from a family of businessmen, Satvik Lodha decided to break the tradition and dreamed of a career in medicine. To make this dream come true he toiled for two years with the support of a loving joint family and encouraging teachers. On June 5, Satvik emerged as a topper in his home state, Jharkhand. 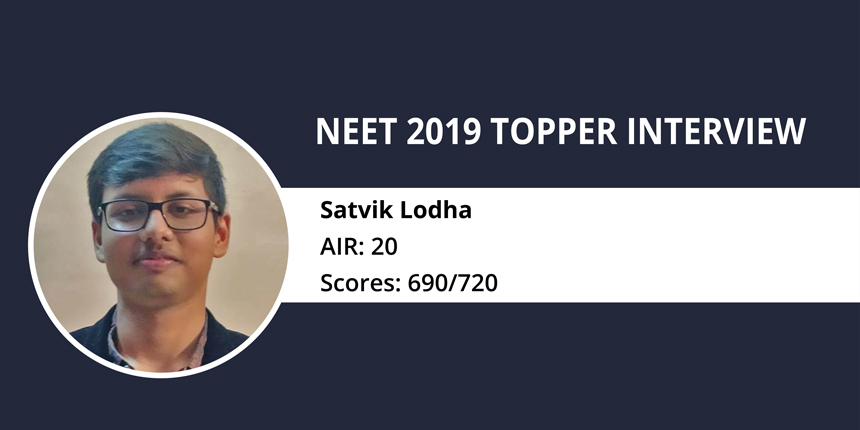 “I have been blessed with a wonderful family who have been a constant source of motivation which allowed me to walk this hard road of NEET preparations,” he says. Satvik hopes to study MBBS in Maulana Azad Medical College if not AIIMS, Delhi.

In an exclusive interview with Careers360, Satvik talks about preparation strategy, study schedule and many other things which led him to success in NEET 2019.

Satvik Lodha: Thanks a lot. I feel extremely happy. I was not expecting this at all. I feel great.

Satvik Lodha: I belong to Jharkhand where I did my primary schooling from Ramakrishna mission school located in Chakulia, Jamshedpur. My father is a businessman and my mother also runs an online business. I live in joint family. All in my family are involved in business ventures.

Satvik Lodha: It is my grandmother who motivated me to become a doctor since the beginning . Later I developed an interest in Biology in class 10 as my teachers used to teach it very well.

Satvik Lodha: My family is my strength. They have been extremely supportive in my preparation journey for two years. Each family member has been motivating me to do my best.

Satvik Lodha: I have appeared for AIIMS and JIPMER as well. The results are yet to be announced and I am hopeful for a good result in both these exams.

Satvik Lodha: I have always believed that sincere efforts in studies always gets paid off. After completing a particular chapter, I made a point to make questions on concepts on my own. That is how I could understand and retain concepts easily. I also used to finish my daily targets and avoided backlogs for the next day. I usually used to spend 15 hours every day in

Sativik Lodha: I was enrolled in a classroom course for two years with Allen coaching institute. It provided me the appropriate guidance that one needs at the time of preparation.

Careers360:How much time did you devote in self-study vs. coaching?

Satvik Lodha: I have always believed that the coaching centre will give you the direction and a path on which you have to walk but it is you who has to walk the distance. I would say 30% coaching and 70% percent self study should be the way to handle the entire preparations.

Satvik Lodha: I did not have a particular strategy to go about the different sections. I was confident about my NEET preparation and the paper was pretty easy. I finished the entire question paper in one and a half hours and then I re-visited all the questions that I had attempted.

Satvik Lodha: I would like to give my family and m teachers the credit because they have given me the best support a medical aspirant could ask for.

Sativk Lodha: Right now, I am waiting for the result of AIIMS as I wish to study in AIIMS, Delhi. If I do not get a good rank in it then I would definitely go Maulana Azad Medical College, Delhi.

Satvik Lodha: I see myself pursuing specializations in the field of Radiology or Hematology.

Satvik Lodha: It is important to be sincere in your studies. Don’t let any backlogs affect your studies. Complete your tasks for the day and you will definitely get success.