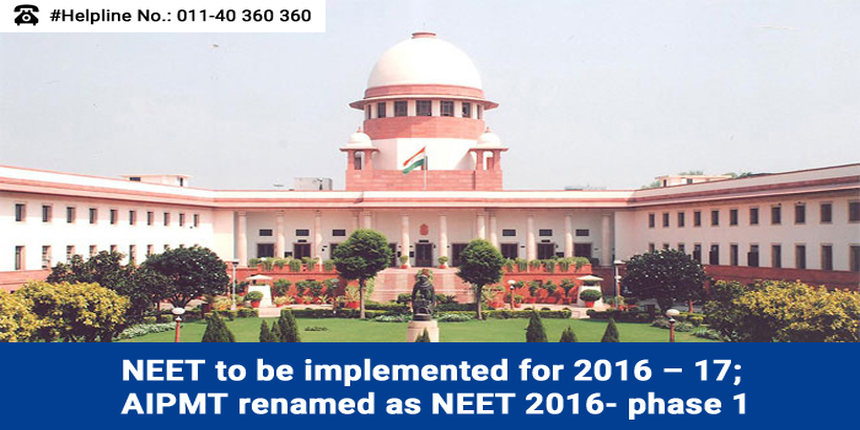 Thus, the All India Pre Medical Test (AIPMT 2016) which is scheduled to be conducted on May 1 will be treated as NEET Stage 1. The combined result of both stages of NEET 2016 will be declared on August 17, CBSE said in the Supreme Court on April 28.

Ajay Sharma the counsel who represented CBSE in the Supreme Court told Careers 360 that CBSE has proposed to conduct NEET in two phases. “NEET Phase 1 will be held for AIPMT applicants as already scheduled on May 1. The next phase of NEET will be conducted on July 24,” he said, adding that the result of both the phases will be announced on together on August 17.

Earlier, the Supreme Court of India had cleared the Medical Council of India (MCI) proposal for National Eligibility Entrance Test (NEET) setting aside its previous order under which common entrance examination for MBBS, BDS and PG courses were proscribed. Read the full story here.

The SC had also asked the concerned authorities to present a schedule on the national level medical test on April 28.  Read the full story here.

The Court decision has come just 3 days before national level medical entrance test AIPMT is scheduled to be held across India for 15 per cent all India quota seats in government medical colleges. With the implementation of NEET 2016, all other upcoming medical entrance exams are likely to be cancelled.

In 2013, NEET was declared illegal and unconstitutional by the Supreme Court. But earlier this month it was restored when a five-judge Constitution bench recalled the earlier verdict and allowed the Centre and the Medical Council of India (MCI) to implement the common entrance test till the court decides afresh on its validity. Further, an NGO, Sankalp Charitable Trust, had approached the SC for implementation of NEET for admissions in MBBS, BDS and PG courses in all medical colleges from the current academic year itself.

Since 2013, many state governments are conducting their admission tests separately. About 6-7 lakh candidates annually appear for medical entrance tests in India. There are about 80-90 entrance examinations conducted by different examination authorities for admissions to about 52000 MBBS seats in in more than 400 medical and dental colleges of India.

The counselling for allotment of national level MBBS and BDS seats under 15% All India Quota is scheduled to be conducted in online mode from August 17 to September 30.