NEET not possible for 2016 admissions, say MCI and Health Ministry 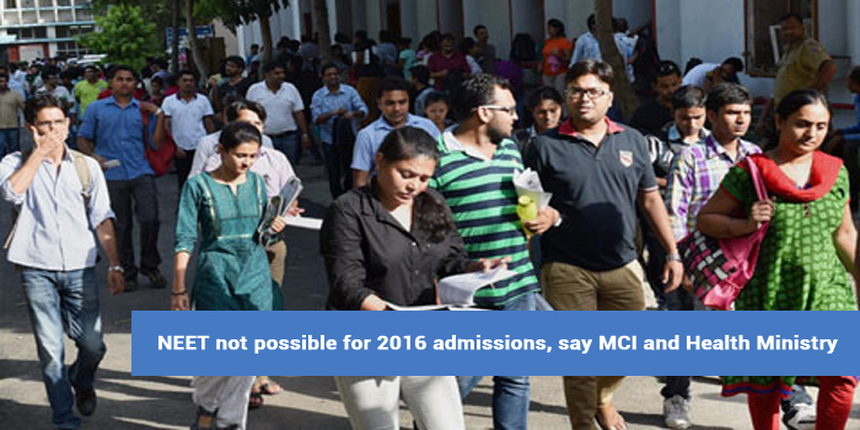 A day after the Supreme Court (SC) paved way for re-introduction of a common medical entrance test, the Medical Council of India (MCI) and the Health Ministry have opined that conducting a common entrance test this year itself is not possible. “The Medical Council of India will not be able to conduct the National Eligibility Entrance Test (NEET) for medical courses across the country this year,” MCI Vice Chairman Dr. C.V. Bhirmanandham opined while sharing his views with a national daily on the recent SC ruling.

According to a report by Times of India, the Health Ministry has also indicated its inability to conduct NEET this year, given the short notice and to protect the aspiring candidates from any last minute hassle. The report has quoted a Health Ministry official saying, "The notification for the common test has to be out by December. It may be too late to start the process now.”

Further, the fact is that a couple of medical entrance examinations have already been conducted, while in many medical colleges the last dates are already over. This means that re-introduction of NEET for the year 2016 seems to be a far cry.

What is SC ruling on NEET?

The same year, the MCI had passed a regulation seeking to introduce National Eligibility Entrance Test for medical seats. This move was opposed by several states governments and the matter went to the Supreme Court, which struck down the same. Still, MCI and the Centre had sought a revision of the order.

Earlier this year, the Union Ministry for Health and Family Welfare approved the MCI recommendation to amend the Indian Medical Council (IMC) Act, 1956 to allow a single common medical entrance test for both undergraduate and postgraduate medical courses in all colleges across the country, including private colleges and deemed universities.

While the common entrance examination may be introduced from 2017, the parliamentary standing committee on health and family welfare has also sought a complete re-haul of the Medical Council of India on account of its lack of accountability and failure of raising the standards of medical education in India. It was also proposed by the health ministry that MCI conduct a national-level medical entrance test for admission to all government medical colleges.

According to MCI, at present, more than 90 entrance examinations are conducted annually for admission to MBBS courses for nearly 300 medical colleges in the country for close to 50,000 seats. Following the SC order for conducting common exam is likely to save students from the hassle of taking several tests conducted across the country. It is also likely to save students to a larger extent from allegedly paying huge capitation fees.

Prof. Dr. C.V. Bhirmanandham, Vice-President MCI commenting on the SC judgment said, “The SC verdict is a very positive move and we have been fighting for it. Merit will get priority now and the reservation policy of the central government would be followed. This would remove undeserving candidates from getting admitted to medical colleges.”

Currently, AIPMT is conducted on all India basis for admission to 15 per cent seats in all government medical and dental colleges across India. Rest of the 85 per cent seats is filled through state level exam in government colleges. Also, private medical institutes conduct their own entrance tests for admission to their MBBS and dental programmes.

Stay tuned to medicine.careers360.com for more information and updates on NEET.